Another Perfect Night for Season-High Score 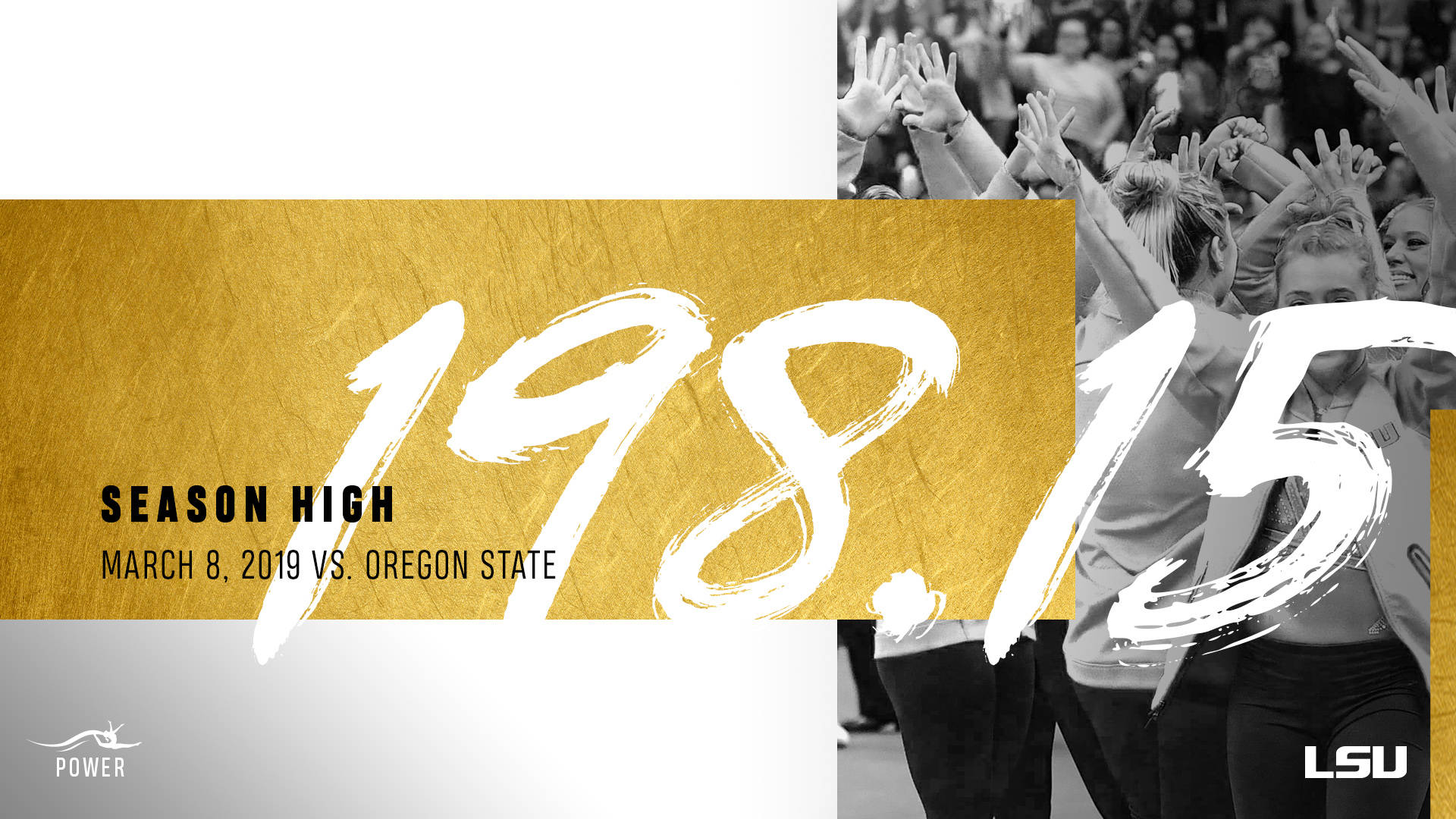 BATON ROUGE – The fourth-ranked LSU gymnastics team put together its best performance of the season and one of the best in the nation in 2019 for a 198.150 in front of a raucous crowd of 11,015, Friday night inside the Maravich Center.

The Tigers improved to 10-3 on the year with the sixth-highest score in school history.

“As you go through the season, a 198 team score is one of your goals,” head coach D-D Breaux said. “We knew this season we would turn the corner at some point and gain momentum. We’ve done that.”

“We asked the kids to just have fun and not get caught up in senior night and they did that. They relaxed, performed and gave it all they have. There was so many incredible performances and so much enthusiasm, passion and pride in what they did. This was LSU Gymnastics and the best of this sport.”

What a way to close out senior night!!! It’s a perfect 10 from @mckennamckelley!!!! pic.twitter.com/zWxPgK5dad

Senior McKenna Kelley and junior Kennedi Edney highlighted the night with perfect 10.0 scores on floor. The perfect scores for the duo marked the 24th and 25th on floor in school history and pushed the total for the program to 61. The two perfect floor routines in the same meet were the first for LSU since Sarah Finnegan and Myia Hambrick in 2018.

Momentum is a Dangerous Drug
🔟🔟🔟🔟🔟🔟🔟🔟🔟🔟🔟 pic.twitter.com/YEsaHwufrf

Finnegan, one of LSU’s four seniors honored on Friday night, set a career-high 39.800 in the all-around to win her 10th title in 11 meets for the second most in a season in school history. Finnegan won the beam title, her seventh on the season and 23rd of her career. She is just one shy of tying April Burkholder for the most in school history. Finnegan also took home the bars title with a 9.95 for her ninth of the season.

On the night, LSU scored a 49.65 on beam and 49.675 on floor. The floor score marked a season high and the sixth-highest score in school history. The score on beam tied for a season high and it’s also the highest in the country this season. It marked the seventh time has scored a 49.650 or higher twice in one season and LSU became the first in NCAA Gymnastics history to do it in consecutive meets.

Edwards and Finnegan Combine for Strong Score on Vault
Starting off her senior night to lead the Tigers with a score of 9.90 was Finnegan. Continuing the high score with a 9.90 of her own for the home team was Ocean Springs, Mississippi’s own Sarah Edwards. In the anchor spot was Edney who had a solid 9.875, while Ruby Harrold and Kelley each added 9.850’s to round out the rotation.

Finnegan Takes Gold on Bars
The squad continued their outstanding performance with a 49.450 on bars. Sami Durante opened the rotation with a 9.90. The Tigers used a 9.75 from freshman Bailey Ferrer and 9.875 from Edney. Senior Lexie Priessman and Finnegan closed out the meet in style with scores of 9.90 and 9.975.

Two Tigers Tally 9.975 as Teams Head to Final Rotation
Sophomore Reagan Campbell continued her hot streak with a near-perfect 9.975 for a second-straight career high. Finnegan anchored the beam for the Tigers with a 9.975. Sophomore Christina Desiderio opened for the squad with a 9.90 and Bridget Dean followed with a 9.875. Edney also scored a 9.925 to tie her season high in the fourth spot of the lineup.

Perfect Scores Cap Off Win for LSU
Joining the perfect 10 club for the Tigers were both Edney and Kelley as they joined elite company with their scores on the floor. Finnegan also performed a near-flawless routine for a 9.95. Harrold opened the rotation on floor with a 9.875 and the squad also used a 9.85 from Desiderio.

Next Up
The Tigers travel to the Mckale Center in Tucson, Arizona to take on the Arizona Wildcats at 8 p.m. on Friday, March 15th. The meet will be the final non-conference competition for the squad in 2019 before traveling down the road to New Orleans for the SEC Championships on March 23.