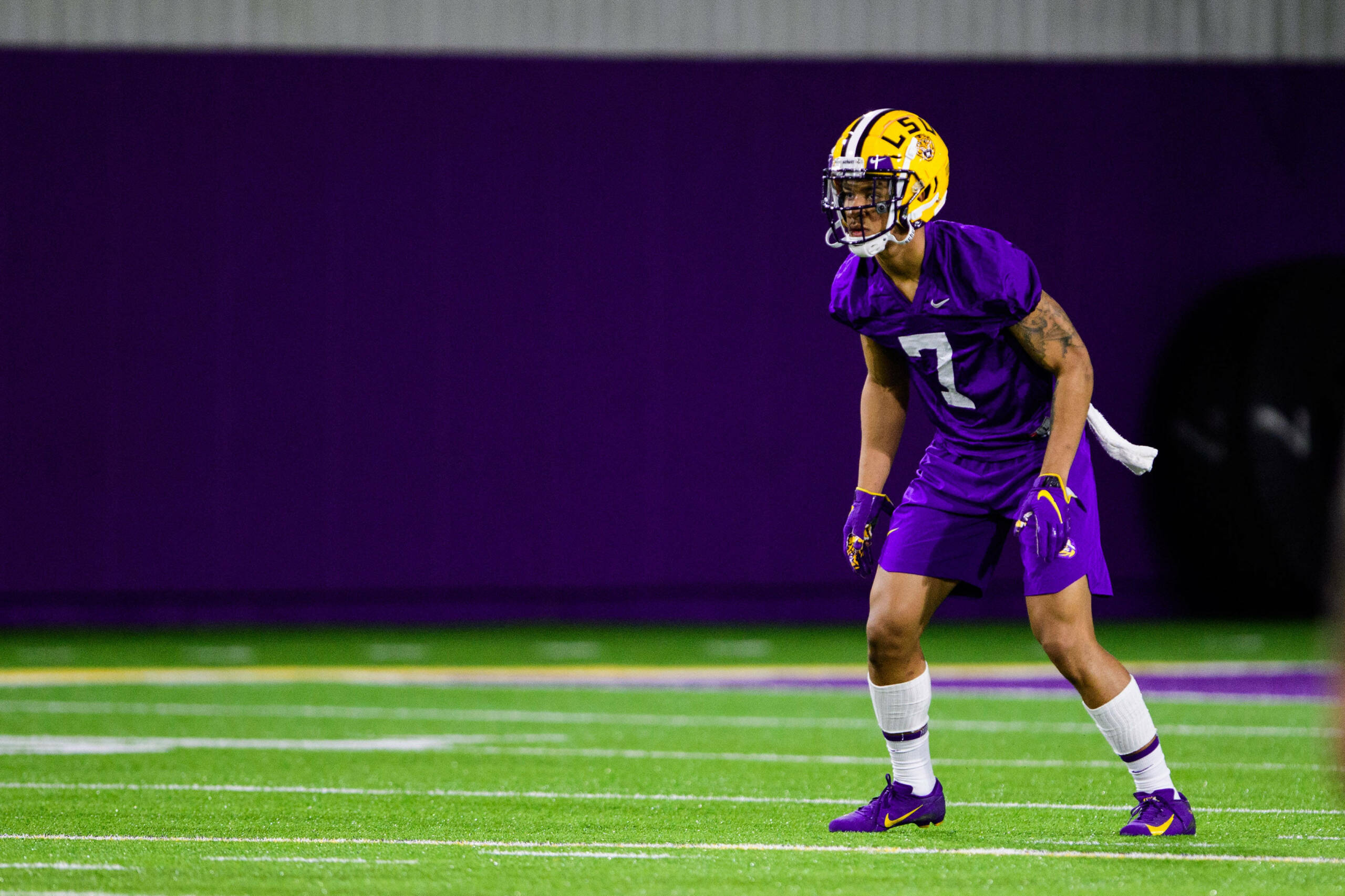 For the first time since knocking off UCF in the Fiesta Bowl on New Year’s Day, the Tigers hit the football field, this time for the first official practice of spring.

With 14 left, including the Spring Game on April 6, here are several topics head coach Ed Orgeron touched on after practice Thursday.

Thursday saw new LSU passing game coordinator and receivers coach Joe Brady on the field for the first time, and Orgeron liked what he saw from the offense. He feels the unit is further ahead than in years’ past, due to the high number of returners – including quarterback Joe Burrow.

“I really like the direction of our offense,” Orgeron said. “They spread the ball around. They moved the ball to the receivers, got the ball to our playmakers in space, and they made plays. Our receivers had a good day. Joe Burrow and Myles Brennan had a good day today.”

At one point during practice, Orgeron pulled aside defensive coordinator Dave Aranda, asking for his take on the way the Tiger offense looked in the padless practice session.

“We were going to 7-on-7,” Orgeron recalled, “and I said, ‘Dave, what do you think?’ He said, ‘The quarterback knows exactly where to go with the ball.’ Those guys are prepared.”

Offensive coordinator Steve Ensminger continues to work with the Tiger quarterbacks, while Brady is teaming with Mickey Joseph on the receivers and introducing run-pass option concepts from his time with the New Orleans Saints.

“We have an excellent plan between Steve Ensminger and Joe Brady,” Orgeron said. “We have two smart quarterbacks in Joe and Myles. They do a great job studying all the time. Our guys have been working endless hours on defense.”

Orgeron said the plan is to put even more on Burrow after the senior-to-be tossed for 2,894 yards and 16 touchdowns in 2018. That includes freedom to make calls at the line of scrimmage and the ability to run more, either in designed run or RPO settings.

“We can put a lot on him,” Orgeron said. “Joe’s tough, Joe can make decisions. We’ll let him do a lot of things at the line of scrimmage – let him check out of plays, let him handle the offense in a lot of situations, going hurry up. Joe’s smart, he can do it. And we’re running the football with him. We ran a couple of read options with him, and he did a tremendous job.”

That increased burden on Burrow is assisted by the development of Myles Brennan. Orgeron said LSU was hesitant to run Burrow early last season, because Brennan had an injury, leaving the Tigers with Burrow as their only scholarship quarterback.

But Brennan shined in the pre-spring Fourth Quarter workouts, and Orgeron hopes to see him on the field more in 2019 as he prepares to take the reins from Burrow in 2020 – if not push him for reps next season.

“I saw something in the Fourth Quarter from Myles,” Orgeron said. “Myles gained 11 or 12 pounds. Myles took a leadership role. He was out there calling the team out, working hard, coming in and working on his own, studying film. I want to see him act like and work like the championship quarterback I know he can be, and he’s done that. He’s probably one of the few guys we could call elite in the Fourth Quarter. If we had to call one elite, it would be Myles.”

There’s no getting around it: LSU will miss Devin White.

The Butkus Award winner cemented his destiny as a first round pick with a stellar showing last week at the NFL Combine, and replacing him in the heart of LSU’s defense will be no easy task.

Junior Jacob Phillips, who started next to White last season, will certainly be counted on, but he will not practice this spring, Orgeron said Thursday.

That means other players will get a chance to show their stuff.

“Although Devin was fantastic for us, you’ve got to move on. Jacob Phillips is not out there, but a guy I’m impressed with is Damone Clark,” said Orgeron. “He has come along. He’s had an excellent offseason – big, fast, strong, and physical. Patrick Queen – I think those guys are improving linebackers.”

Thursday also served as the debut for LSU’s new No. 7: Grant Delpit.

The uniform signifies the Tigers’ most elite playmaker, and Delpit certainly fits the bill, coming off a season in which he became just the ninth player in school history to earn Unanimous All-American honors.

“He came up to me wanting to wear 7, and deservedly so,” Orgeron said. “I think he’s one of the best players in the country. He deserves it. He’s a great character, a great family, and I think he’s going to wear it well.”

The spring always offers the chance to get a first look as LSU’s early enrolling freshmen, and Orgeron liked what he saw out of his newcomers, particularly Siaki “Apu” Ika and Derek Stingley Jr.

Ika will get the chance to stand out in LSU’s defensive front, with returning starters Rashard Lawrence and Breiden Fehoko out with injuries (Orgeron did say Fehoko could practice some this spring.)

Stingley, meanwhile, is an early favorite to fill the starting spot vacated by Greedy Williams, and he also worked in punt return duties on Thursday.

“Apu Ika was outstanding,” Orgeron said. “I know he was going against the second team, but he had a dominating day. We didn’t have pads, but he was dominating. So did Derek Stingley. I thought Derek Stingley had a tremendous day.”

Time to Step Up

Another position of interest this spring will be running back, as LSU looks for someone to fill the shoes of 1,000 yard rusher Nick Brossette.

While freshmen John Emery Jr. and Tyrion Davis-Price will certainly get their chances in the fall, the spring will provide the chance for Tae Provens and Chris Curry to show what they can do next to returning leading rusher Clyde Edwards-Helaire.

Asked about Provens and Curry specifically, Orgeron was clear: “I need them to step up.”

“I need them to play SEC type football,” he said. “Both of them last year did a good job. I think they need to raise their level of play, and I think they’re both capable of being good SEC backs.”