No. 9 Baseball Faces Cal at The Box This Weekend 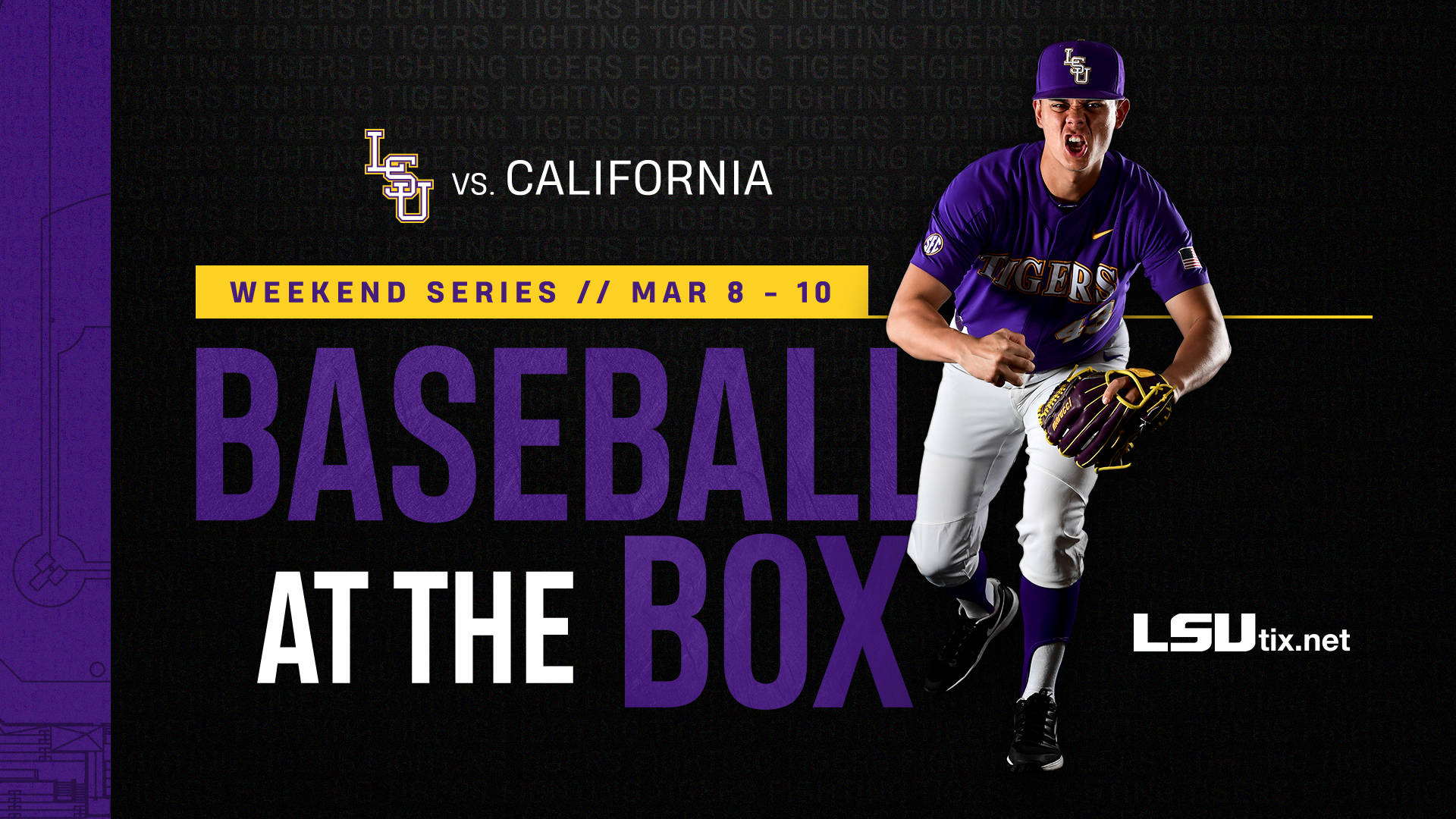 ONLINE
All three games will be aired online on the SEC Network +, which is accessible at WatchESPN.com and the Watch ESPN app.

SERIES RECORD VS. CALIFORNIA
This weekend marks the first meeting between LSU and California. The Bears were the No. 3 seed in the 2001 Baton Rouge Regional but did not face the Tigers after falling to VCU, defeating Minnesota and dropping their game against VCU, ending their postseason run.

QUOTING PAUL MAINIERI
“We have put last week out of our minds, and I thought we responded in a good way last night. Our whole focus now is on Cal. I groom these guys to just take it one game at a time. I know it is so cliché, but you can’t play baseball any other way. You just have to deal with the current game, and after it is over, you think about the next game. After we play tomorrow night, we will have another game in less than 24 hours, and when that game is over, we have another game less than 24 hours later. You just can’t dwell on any negatives or positives. The scoreboard is 0-0. We are going to go try and outplay the other team. That is the way our kids think. We will be in fine shape, we just have to go and play better this weekend.”

ABOUT THE TIGERS
• LSU started the season 8-0 for the ninth time in school history and fourth time under head coach Paul Mainieri. The Tigers are currently 9-3 on the year.
• The Tigers used the long ball to propel them to a 9-2 victory against Holy Cross when Daniel Cabrera, Antoine Duplanits and Brock Mathis each hit solo home runs. It was the fourth home run of the season for both Cabrera and Duplantis who sit at No. 5 in the SEC in home runs this season.
• Duplantis went 2-for-3 Wednesday night with one RBI and three runs scored … He has a conference-best 24 RBI … His 19 hits this season are tied with Josh Smith for a team-high … Duplantis now has 287 career hits, which is 65 shy of matching former LSU first baseman Eddy Furniss (1995-98) as the all-time SEC hits leader with 352.
• Junior shortstop Smith is batting a team-best .452 (19-for-42) with five doubles, seven RBI and 16 runs scored … Smith is third in the SEC in batting average, fifth in runs scored and eighth in hits … Smith returned to the lineup on a full-time basis this season after missing all but six games in 2018 due to stress reaction in his back.
• Since moving into the second spot in the lineup, junior outfielder Zach Watson has surged and is now batting at a .348 clip (16-for-46) with five doubles and 14 runs scored with eight RBIs.
• Senior infielder Chris Reid batted .400 (4-for-10) last week with two doubles, three RBIs and four runs … Reid earned his first start of the season Sunday after going 2-for-2 at the plate with one run Saturday afternoon, and he followed with a 1-for-4 day with one walk and one run scored Sunday … The senior started at third base Wednesday and has a .313 batting average on the year.
• Sophomore right-hander Trent Vietmeier was the first Tiger out of the bullpen Wednesday and was tremendous in his appearance, tying his career-best with four strikeouts in 1.2 shutout innings.
• Sophomore right-hander Eric Walker made his first start since 2017 last Wednesday versus Southern, and he blanked the Jaguars in two innings and struck out three … Walker returned to the mound Sunday against Texas and allowed three runs on four hits, walked one and struck out one in four innings of work.
• Freshman Cole Henry was brilliant as he entered out of the bullpen Sunday at Texas and threw 3.1 innings and allowed one run on three hits, walked one and struck out a career-high four batters.

ABOUT THE GOLDEN BEARS
• Cal is 6-4 on the year and is a perfect 4-0 on the road. Last week, the Golden Bears went 2-1 in a game against St. Mary’s.
• As a team, Cal is batting .277 with 17 doubles, 12 home runs and 64 RBIs. The Golden Bears have successfully stolen nine bases on 12 attempts.
• Junior first baseman Andrew Vaughn is leading the team with a .529 batting average (18-for-34) and has drawn 15 walks. The 2018 Golden Spikes Award Winner has hit seven home runs and driven in 18 runs while slugging 1.176.
• Cal’s pitching staff has a combined ERA of 3.89. There are three Golden Bears with a 0.00 ERA—Rogelio Reyes, Jack Delmore and Nick Proctor. Friday night starter Arman Sabouri has struck out a team-best 12 batters in 9.2 innings. He has started four games and has a team-high five appearances on the year.