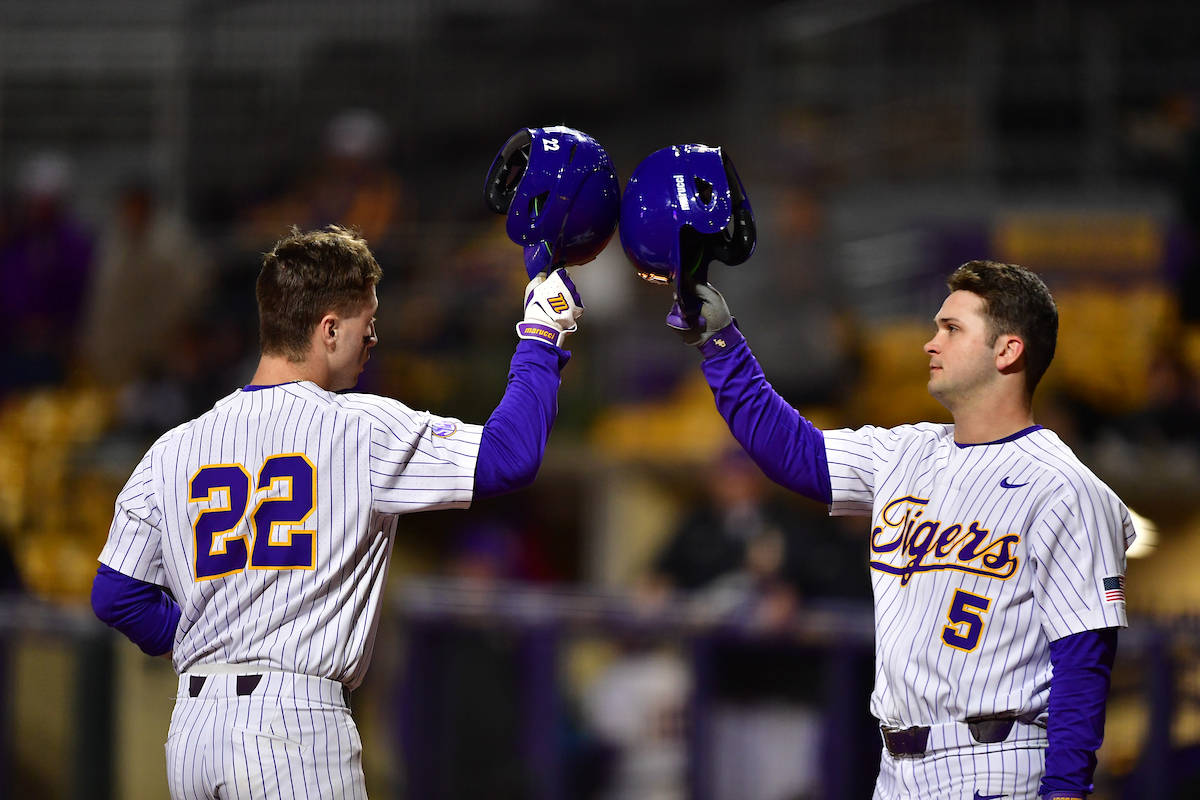 LSU will return to action in a three-game series against Cal beginning Friday at 7 p.m. CT in The Box. The game will be available online only through the SEC Network+. Fans can listen to the game on the LSU Sports Radio Network, including 98.1 FM in Baton Rouge.

Trent Vietmeier was the first Tiger out of the bullpen and had a fantastic night firing 1.2 shutout innings and tied his career-high with four strikeouts.

“I thought (Trent) Vietmeier was really the key to the game,” head coach Paul Mainieri said. “He came in and did a tremendous job for us of getting out of the second inning and then giving us a third inning. For the most part, everyone did well.

“Hal Hughes was more selective at the plate, which I think helped us offensively. We had a couple big hits in the inning after they made the announcement about the final score of the basketball game. We got a little charge out of the crowd. It seemed like the next pitch, (Daniel) Cabrera got that two-run base hit. It was pretty cool. There were a few big hits tonight. To be honest, I was caught off guard by the quality of (Holy Cross’) arms early in the game. I am glad we were finally able to take control of the game. It was a little scary there for a while.”

George earned the win and improved to 2-0 on the year after firing 1.2 innings.

Pat McGowan started the game for the Crusaders and threw one inning, allowing one run on one hit and striking out one. CJ McKennitt suffered the loss and fell to 0-2 on the season after allowing two runs on two hits, walking one and striking out two in two innings.

In the top of the first inning, right fielder Ben Malgeri deposited a home run into the left field bleachers to give Holy Cross the 1-0 lead.

Senior right fielder Antoine Duplantis knotted the score at 1-1 with a home run of his own to right field in the bottom of the first inning. The home run was Duplantis’ fourth this season, which is a career high.

With Crusader runners on the corners and two outs after back-to-back walks and a stolen base, a fielding error by the shortstop allowed third baseman Alex Gionis to score, making it a 2-1 game in favor of Holy Cross in the second inning.

Shortstop Hal Hughes led off the bottom of the third inning with a walk, and catcher Brock Mathis singled through the left side to put runners on first and second with no outs for second baseman Drew Bianco, who dropped a sac bunt to advance the runners into scoring position. With one out, center fielder Zach Watson hit a sacrifice fly to left field to drive in Hughes and tie the game, 2-2.

The Tigers regained the lead when left fielder Daniel Cabrera hit his fourth home run of the season over the right-center wall, giving LSU the 3-2 advantage.

In the bottom of the fifth inning, LSU broke the game open to extend its lead to 7-2. The Tigers loaded the bases after Bianco was hit by a pitch, Watson singled and Duplantis drew a walk. With two outs, Cabrera and first baseman Cade Beloso hit back-to-back base hits to center field to drive in three runs. After third baseman Reid walked re-load the bases, a passed ball allowed Cabrera to score to give LSU the five-run lead.

Mathis hit a solo bomb to left field with one out in the bottom of the sixth to propel LSU to the 8-2 lead.

LSU manufactured a run in the bottom of the seventh inning to take the 9-2 lead when Duplantis scored on a ground ball by Beloso after reaching earlier in the inning with a single to second base.