Tigers to Play for Title Saturday after OT Win at UF 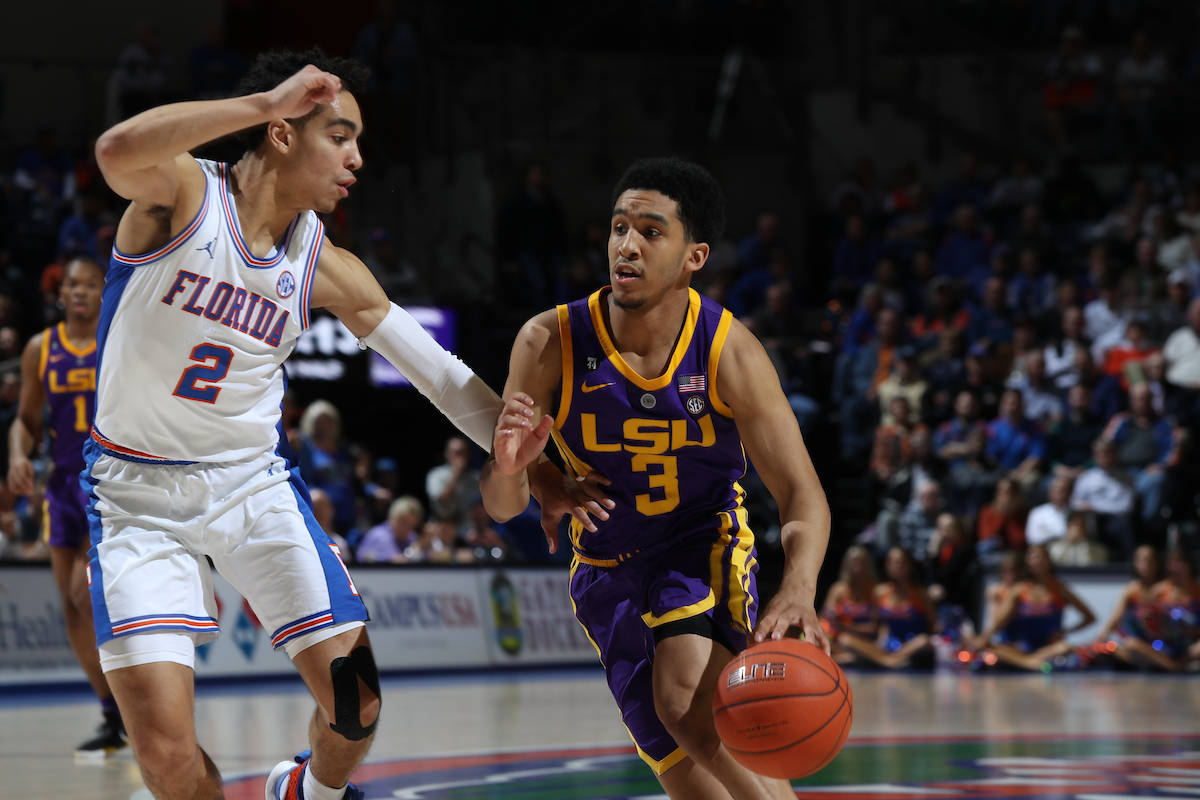 GAINESVILLE, Florida – The No. 10 LSU Tigers will play for a Southeastern Conference championship Saturday night after finishing its road schedule 9-0 with a 79-78 win in overtime over Florida Wednesday night at the Exactech Center at the Stephen C. O’Connell Center.

The Tigers are now 25-5 and 15-2 in the SEC, tied with Tennessee for first place going into the final day of league play on Saturday. Tennessee is at Auburn at 11 a.m. and LSU hosts Vanderbilt in the final SEC game of the regular season at 7:30 p.m. (LSU Sports Radio Network and SEC Network).

Both teams will be named champions if they tie, but LSU has the tiebreaker for the No. 1 seed in the SEC Tournament, which begins March 13 in Nashville.

LSU can win the league outright with a Tiger win and a Tennessee loss. If both teams happen to lose, Kentucky could still make it a three-way championship with a win, but again LSU has all the tiebreakers in that situation.

Senior day ceremonies will begin Saturday at 7:10 p.m. prior to the game to honor Daryl Edwards and Kavell Bigby-Williams.

The LSU-Vanderbilt game is officially sold out. Fans can still purchase tickets thru Stubhub, the official marketplace of LSU Athletics at LSUsports.net/marketplace or stubhub.com. Standing room only tickets may be available for purchase based on attendance capacity at the Maravich Center ticket office after tipoff. LSU students will be admitted free of charge with a valid student ID while seats are available.

LSU on Wednesday became the third team in the present 18-game league schedule (since 2013) to go 9-0 in the SEC on the road joining Kentucky (2015) and Florida in 2014. The Tigers broke a tie with the 1981 LSU team that won its first eight SEC games for the previous school road win mark in the SEC in a season.

In what has become an almost typical story for LSU, the Tigers rallied again in the second half to win. This time LSU trailed by eight with 6:15 to play in regulation, 62-54. But LSU evened the game in less than 80 seconds as Skylar Mays hit a three-pointer, Emmitt Williams got a put back dunk and Javonte Smart his a trey that tied the game at 62-62 with 5:03 to play.

After a Florida turnover, LSU would take the lead on a bucket by Tremont Waters.

LSU remained with the lead down the stretch in regulation, up 70-67 with 1:37 to play on a tip-in by Waters. Jalen Hudson’s dunk with 29 seconds left put the Gators within one at 70-69.

Florida fouled Mays, an 86 percent free throw shooter, with 28.6 seconds to play, but the junior missed the front end of a one-and-one and Florida had a chance. Out of a timeout, the Gators found Hudson for a three-pointer and a 72-70 lead.

The ball ended up in Waters hands as LSU elected to play on and he drove for the bucket and scored with 0.5 remaining on the clock to tie the game at 72-70 and force the overtime.

In the overtime, Smart’s jumper and a three-pointer by Waters on back-to-back possession gave the Tigers the 77-72 advantage with just 59 seconds off the five minute extra session. Hudson would score to make it 77-74.

LSU’s Naz Reid would get LSU’s final points of the game at the 3:09 mark of overtime to give LSU a 79-74 advantage.

Andrew Nembhard had a bucket and Kevarrius Hayes at two free throws to make it 79-78 in favor of the Tigers with still 2:22 to play.

The teams each missed scoring opportunities twice on both ends before Mays got the defensive rebound off a missed shot with 38 seconds to play. LSU came down, but Mays missed a contested layup giving Florida the ball with 17 seconds left. The Gators elected to call timeout with eight seconds remaining.

But out of the timeout, the Tigers had their defense in good shape and the Gators were not able to get a shot off before the final horn, sending Florida to its second straight home defeat and allow LSU to avenge the Gators win in overtime in Baton Rouge.

Hudson had 33 points, hitting 11-of-20 field goals with four treys, while Keyontae Johnson had 15 points and Noah Locke 10.