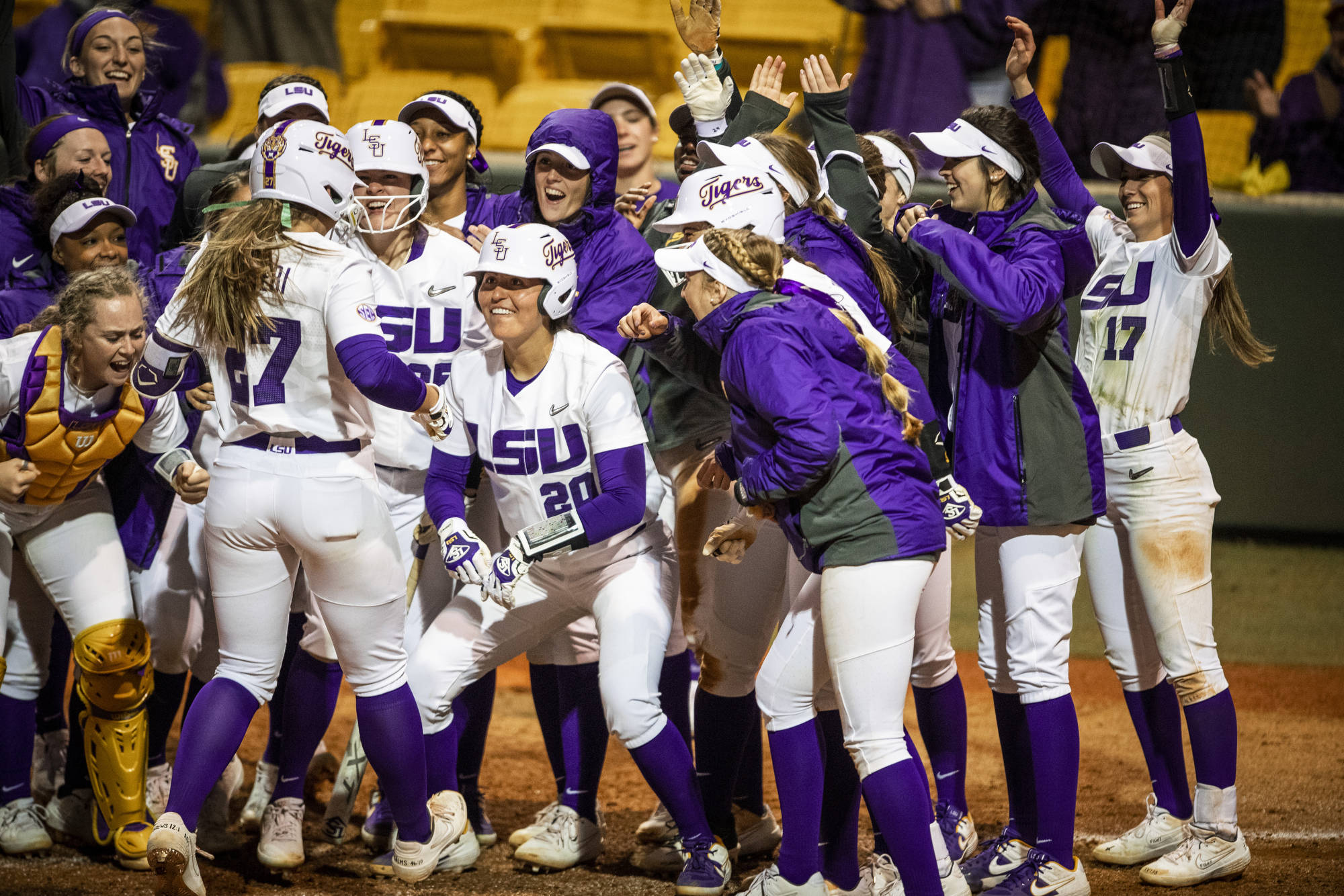 It’s happened countless times in practice, from fall ball to the spring, so if she’s being perfectly honest, Shelbi Sunseri can’t remember who first smashed a home run off the new videoboard beyond the right field fence in Tiger Park.

And it wasn’t until Sunseri got back to the dugout after blasting her 11th home run of the season that her teammates alerted her to the accomplishment: her opposite-field dinger against Illinois State on March 2 – her 11th in 21 games – was the first in-game effort to smash into the 655-square foot newcomer.

The sophomore puts her second one on the night & 11th on the year off the scoreboard!

Take note, all who dare sit beyond the outfield fence of Tiger Park these days. Bring a glove, or duck for cover, because softballs are flying out of the LSU’s home park with unprecedented frequency this season.

Sunseri is leading the charge for a Tiger offense that ranks among the most powerful in the nation. On a team full of offensive threats – LSU ranks ninth nationally in team batting average, hitting .348 in 2019 – the sophomore’s 11 dingers rank third in the country. She also leads the nation in RBI (32) and ranks second in slugging percentage (1.231), all while maintaining a 1.93 ERA in 40 innings on the mound.

The numbers are staggering, but they are not surprising, to those familiar with Sunseri’s work ethic.

“Anything she does isn’t even a surprise because she works so hard all the time,” says junior outfielder Aliyah Andrews. “This was bound to happen.”

Head coach Beth Torina had a similar inkling after watching Sunseri crush homer after homer in the fall and spring practices. As a freshman, Sunseri hit seven home runs in just 36 games, missing the first half of the season with a stress fracture in her fibula.

“We don’t really know what a full season would’ve looked like for her,” Torina says.

So far, it looks like a record-breaking one. She needs just seven to tie the school record for homers in a single season. At her current rate – essentially one every other game – Sunseri is on track to set a new school mark and still have more than a dozen regular season games to play.

The increase in production is primarily the result of an offseason of grinding. Sunseri, with the help of assistants Howard Dobson and Lindsay Leftwich, made small adjustments to her swing – “being more behind the ball, staying more in my legs,” she says.

“She’s completely bought in,” Torina says.  “She might be the most bought in player we have. First one here, last one to leave kind of kid. If the staff is asking her to do something, she’s doing it.”

Sanchez, in fact, became the first player in school history with multiple home runs in consecutive games, hitting two each against Stephen F. Austin and Northwestern State in the Tigers’ last two outings.

Did you know… @shemmy_sheyy is the first player in program history to hit multiple home runs in consecutive games! #FightAllTheWay pic.twitter.com/htYj0AXaLZ

“I’m actually not surprised,” Sanchez says of the uptick in taters. “I knew people were going to be surprised, because in recent years, LSU wasn’t known as an offensive school. It was more known for the pitching. But I think we worked really hard during the offseason to work on some of those power numbers.”

That work ranged from high-tech innovation to old school methodologies. Regarding the former, LSU implemented Blast Motion tracking technology to its bats this offseason. The device attaches to the butt of the bat and communicates instantly with a smart phone, tracking variables like bat speed, attack angle, and time to contact to help hitters adjust their swings instantaneously.

“The nice thing about Blast Motion is it gives them a visual, so they can see right away,” Torina says. “They have instant feedback, and they can know right away if what they did was right or wrong. For them, they’re connected to their phones, so it’s nice to have that instant feedback.”

“The kind you get at Lowe’s or Home Depot,” she laughs. “It gets those fast twitch muscles going.”

Andrews knows all about fast twitch muscles. The nation’s third-leading base stealer with 21 swipes so far this season, she’s used to utilizing her speed to get on base and score runs. Andrews has done both in abundance this season, leading the nation with 28 runs.

But as her teammates keep crushing balls over the fence, she’s doing more jogging to home plate than she’s used to.

“It’s been great to see it,” she says. “It’s a huge confidence booster. I know, I just need to get on base. It’s so reassuring for all of us to know if we get on base, somebody’s going to do the job to get us in.”

“Our offense has been phenomenal,” Torina adds. “A big reason we’ve won a lot of the games we’ve won is the way they’ve swung the bats and been such a potent offense. They’ve been able to put up a lot of crooked numbers. It’s been fun to watch.”