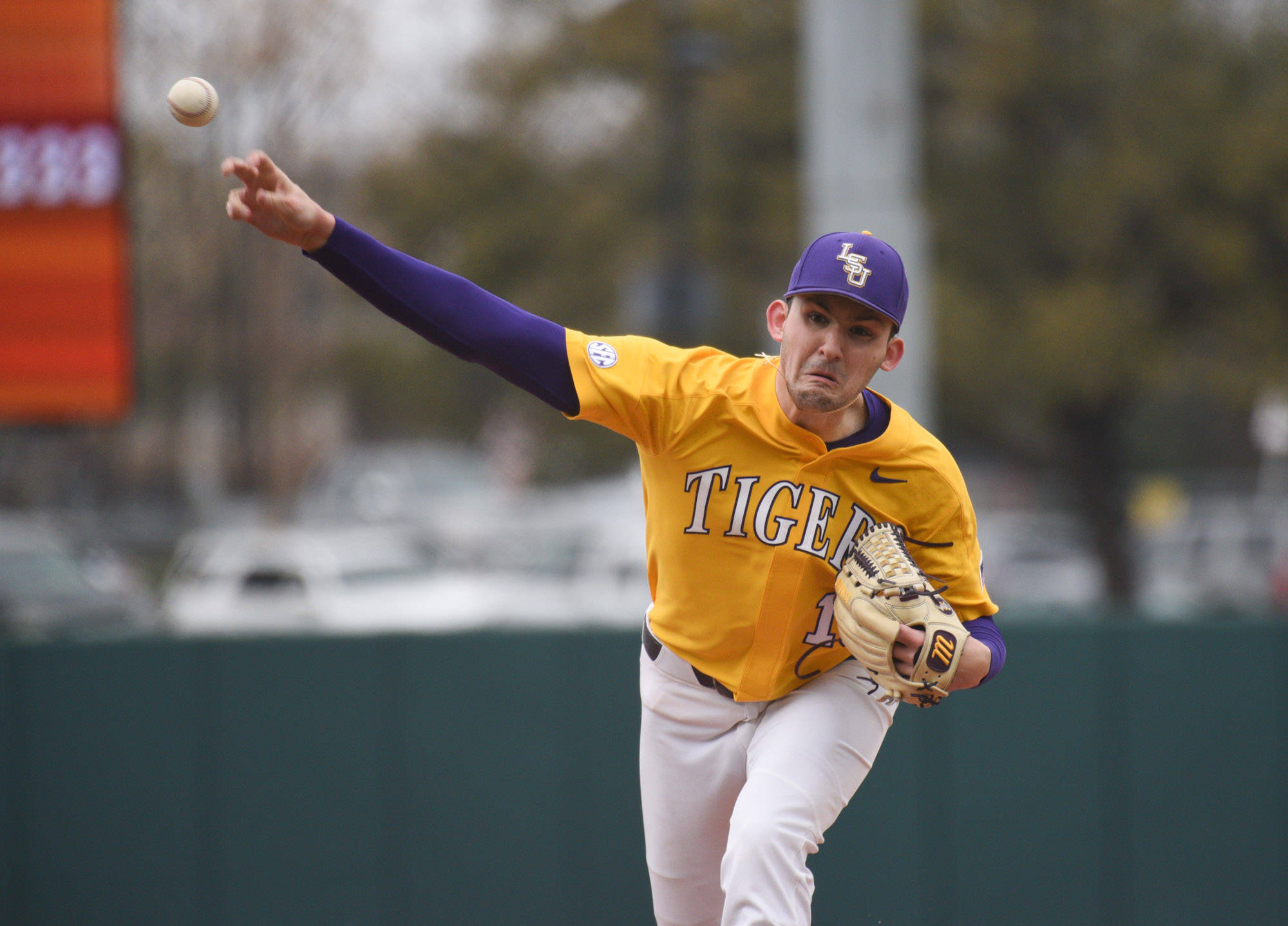 AUSTIN, Texas –Texas right fielder Austin Todd hit an RBI single up the middle in the bottom of the ninth inning Sunday afternoon to complete a comeback from a 6-3 deficit as the No. 18 Longhorns posted a 7-6 win against No. 1 LSU in UFCU Disch-Falk Field.

LSU will return to action against Holy Cross Wednesday, March 6 at 6:30 p.m. CT in Alex Box Stadium, Skip Bertman Field. The game will be available online only through the SEC Network+. Fans can listen to the game on 100.7 FM in Baton Rouge or online at LSUsports.net/live.

“It was obviously a heartbreaker for us,” head coach Paul Mainieri said. “We thought we had a game-ending double play there. We just didn’t execute it. It didn’t work out for us. We felt pretty great with a three-run lead the way that (Cole) Henry was throwing to turn the ball over to (Todd) Peterson, who has been doing such a great job. They didn’t hit the ball hard that last inning. It was just some kind of bizarre plays that allowed them to come back and tie the game and they take the lead. We thought we had the double play at the end, and we just couldn’t make the play there. They got the clutch hit in the end. It was a tough loss for us, and we will just move forward.”

Todd Peterson (2-1) suffered the loss after allowing three runs—two earned—on four hits and striking out two in one inning.

Catcher Brock Mathis led off the top of the third inning with a single up the middle. The sophomore advanced to third after a passed ball and wild pitch before scoring on center fielder Zach Watson‘s two-out single to right-center to give LSU the 1-0 lead.

In the bottom of the third inning with one out, and shortstop Bryce Reagan on third after a double to right-center and a ground ball to third, left fielder Eric Kennedy dribbled a double down the left field line to score Reagan. In the next at-bat Todd hit a two-run blast to right field, and after three innings, Texas led LSU 3-1.

The Tigers tied the game in the top of the fifth. With one out and Mathis on first after being hit by a pitch to lead off the inning, shortstop Josh Smith doubled down the left field line to put runners in scoring position. Mathis scored on a wild pitch by Cobb, and Smith touched home on a ground ball by Watson to the shortstop to knot the game, 3-3.

In the top of the sixth inning after a single by third baseman Chris Reid, designated hitter Saul Garza reached on an error, Mathis drew a walk and Smith slapped a ball straight to the shortstop, who was unable to field the ball to drive in Reid. Watson followed with a single to right-center, which scored Giovanni DiGiacomo who had entered to pinch run for Garza, to propel LSU to the 5-3 lead.

With two outs in the top of the seventh, DiGiacomo stood on second after a two-out walk and a wild pitch when Mathis ripped a base hit right at the third baseman whose errant throw to first allowed DiGiacomo to score, making it 6-3 LSU.

Kennedy led off the bottom of the eighth inning for Texas with a double to left field before scoring on a two-out double by third baseman Ryan Reynolds to cut LSU’s lead to 6-4.

In the bottom of the ninth with runners on first and second after catcher Michael McCann was hit by a pitch and shortstop Masen Hibbeler singled through the right side, the runners advanced on a sacrifice bunt. An infield single by center fielder Duke Ellis allowed McCann to score, and Kennedy was safe on a fielder’s choice, which tied the game before Todd’s single to end the contest.