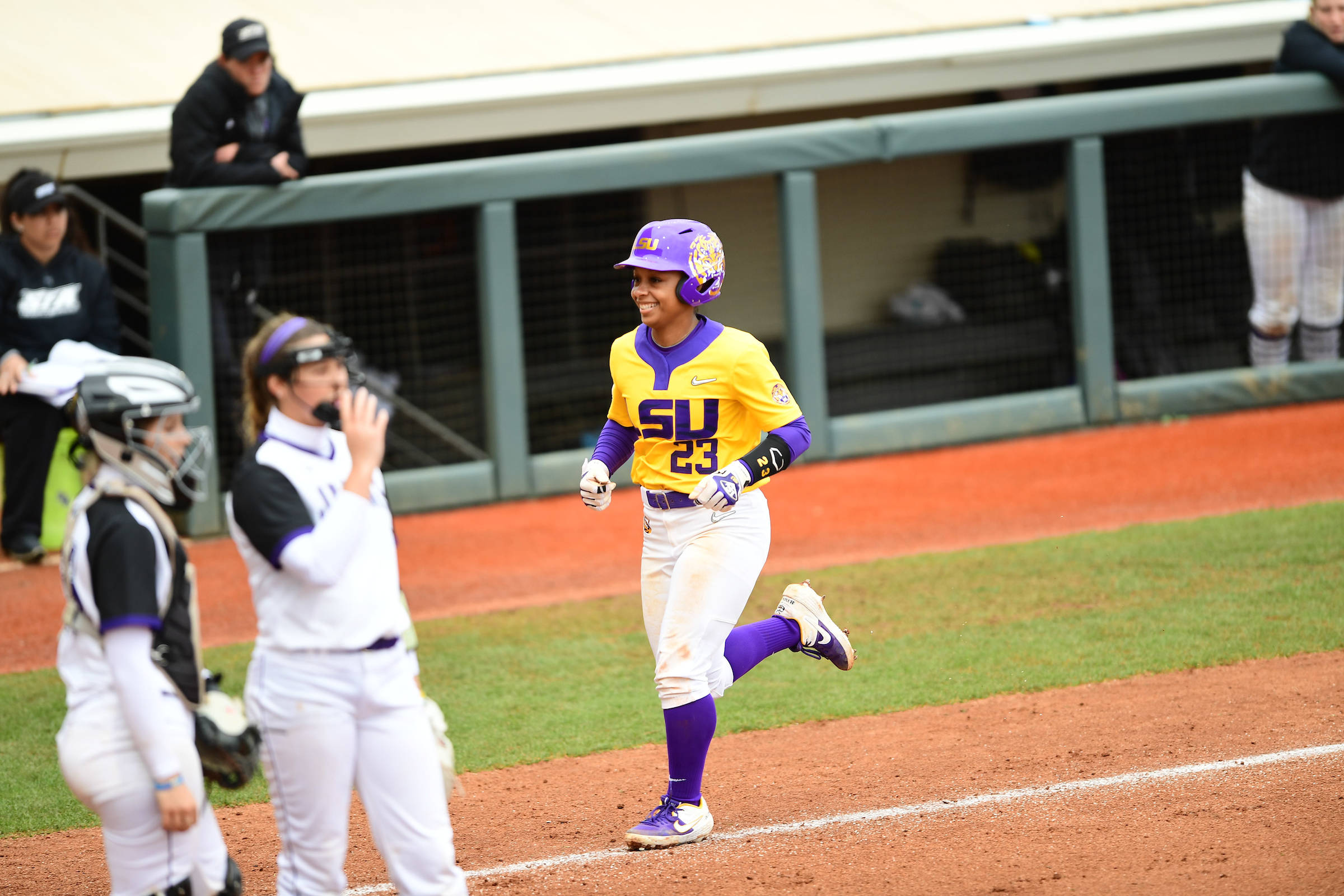 BATON ROUGE – The LSU Tigers utilized an eight run fourth-inning to defeat Stephen F. Austin 13-3 in five innings. With the win, the Tigers improve to 18-4 on the season while SFA falls to 12-9.

The scoring started on the first pitch after a two-hour rain delay in the bottom of the second when Elyse Thornhill drilled one in the right-center gap for a two run double, scoring Michaela Schlattman and Amber Serrett. The next better, Shemiah Sanchez made it 4-0 with her third dinger of the season.  A passed ball scored another run to make it 5-0 LSU after two.

SFA scored two in the third and one in the fourth to close the Tiger lead to 5-3. The Tigers responded by scoring eight runs in the bottom of the fourth. Aliyah Andrew started the inning off with a leadoff double and then scored on an Amanda Sanchez single. Claire Weinberger, pinch running for Sanchez, scored on fielder’s choice to make it 7-3. Serrett singled up the middle, scoring Shelbi Sunseri to make it 8-3 Tigers.

With the bases juiced, Shemiah Sanchez hit her first career grand slam, and second homerun of the game to extend the lead to 12-3. For Sanchez, six runs batted in is a new career high.  Karrington Houshmandzadeh collected her first career hit and RBI as she drove a line drive to right field, scoring Savanna Stewart to make it 13-3.

It’s a GRAND SLAM!!! @shemmy_sheyy blasts this one to center, her first career grand slam!! The Tigers lead 12-3!

In the circle, Shelby Wickersham went the distance, giving up five hits and striking out four to improve to 6-1 on the season.

“I don’t know but when she gets hot she gets really hot. It’s nice to see her maybe get heated up going into SEC play.”

“No question Shemiah is probably hitting in the middle of the lineup on a lot of teams.  She was hitting today in our eight-hole and being able to do that from that spot in the lineup shows that you have a pretty deep lineup.  It was a great day for her, I’m proud of her. She’s been missing things lately, so it’s nice to see it work out for her.”

LSU is on the road for four-straight games this next week, heading to Northwestern St. on Tuesday, March 5 for a 3:30 p.m. start time. The Tigers open up SEC play Friday, March 8 in College Station as they take on the Texas A&M Aggies.

For all of the latest news and information on Tiger softball, visit www.lsusports.net/softball. Fans can also follow the program on its social media outlets at www.Facebook.com/lsusoftball along with @lsusoftball and @BethTorina on Twitter and @lsusoftball on Instagram