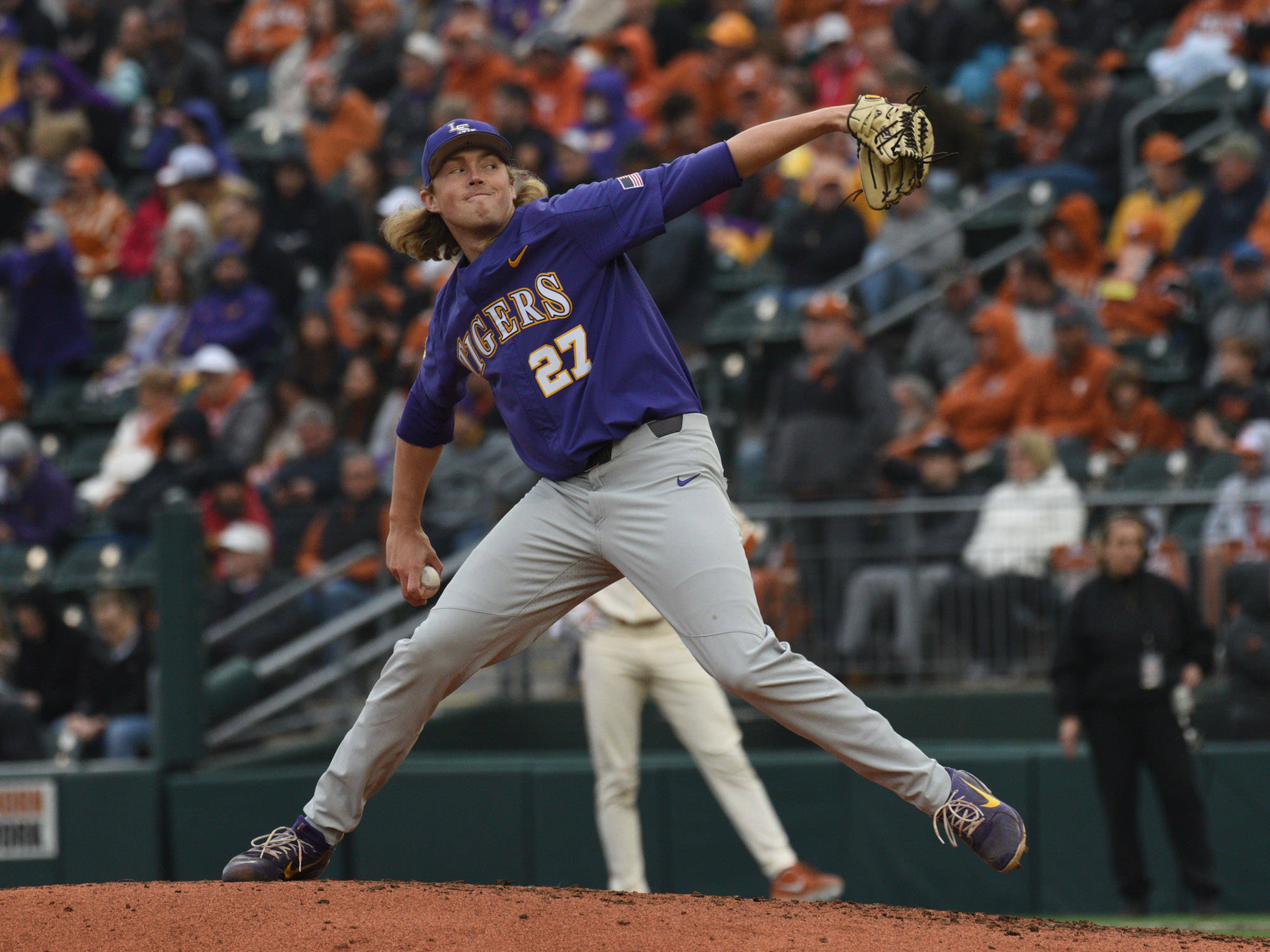 AUSTIN, Texas – No. 18 Texas’ six-run second inning propelled the Longhorns to an 8-4 victory against No. 1 LSU baseball Saturday evening in UFCU Disch-Falk Field.

“We walked 11 and hit a batter, gave up 12 free passes today, and that’s really the story of the game,” head coach Paul Mainieri said. “It was pretty much an even game. We outhit them, but the difference was that we just gave them too many free passes. We have to certainly address this after two nights in a row—nine last night, 12 today. You just can’t beat good clubs when you hand them free bases. We have guys with good stuff and good arms, and we have to challenge hitters more and let our defense play.”

Cole Quintanilla earned his second save of the year for the Longhorns after throwing three innings and limiting the Tigers to one hit.

Freshman Landon Marceaux (1-1) suffered the loss after starting the game for the Tigers. The right-hander allowed six runs on three hits, walked four and struck out two in 1.1 innings.

Matthew Beck and Ma’Khail Hilliard were highlights among the Tiger pitchers Saturday. Beck blanked the Longhorns in 3.2 innings of work and walked three, and Hilliard faced seven batters, walked one and struck out three in to shutout the Longhorns in the final two innings of the game.

Chris Reid came off of the bench to play third base in the bottom of the sixth inning and led the Tiger hitters going 2-for-2 with one run scored.

In the bottom of the second with the bases loaded and one out, center fielder Duke Ellis drew a bases loaded walk to bring in first baseman Tate Shaw, who reached after being hit by a pitch. Left fielder Eric Kennedy and right fielder Austin Todd hit back-to-back base hits to drive in three Longhorn runs. A wild pitch allowed Kennedy to steal third and then score before designated hitter Zach Zubia hit an RBI double to left field, plating Todd to give Texas the 6-0 lead.

The Tigers cut the Texas lead to 6-3 in the top of the third inning. With one out and the bases loaded after three consecutive singles by shortstop Josh Smith, center fielder Zach Watson and right fielder Antoine Duplantis, left fielder Daniel Cabrera smashed a double down the right field line to bring in two runners. Duplantis scored in the next at-bat on a ground ball by first baseman Cade Beloso.

With runners in scoring position after second baseman Masen Hibbler and Ellis walked and advanced on a balk, an error by the first baseman allowed Hibbeler to score. Todd followed with a single through the right side to bring in Ellis and make it an 8-3 game in favor of Texas.

Third baseman Chris Reid led off the top of the seventh inning by dropping a double into left field. With runners on first and second and no outs, Reid turned third on a ground ball to shortstop and scored on the error by the second baseman to cut the Texas lead to four runs, 8-4.

Junior Aaron George was the first Tiger out of the bullpen. He threw one inning and allowed two runs on two hits, walked three and struck out one.