Tigers Battle to Victory in Tuscaloosa, 74-69 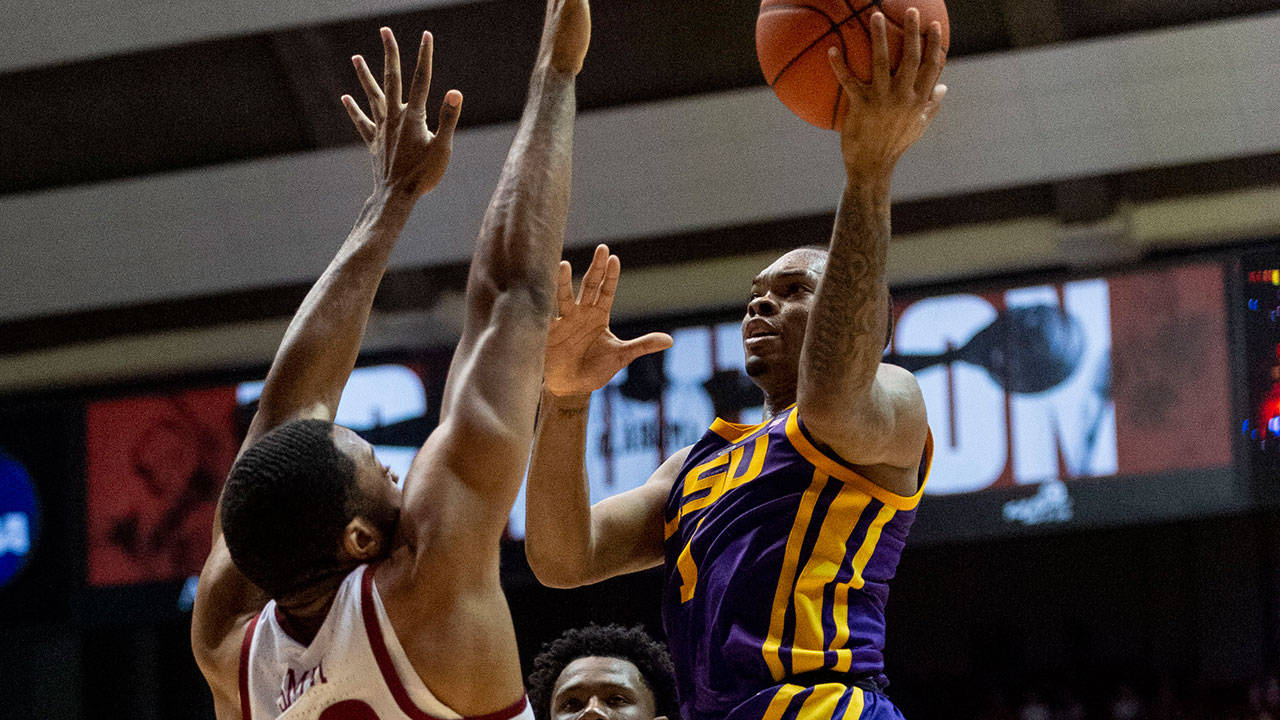 TUSCALOOSA, Alabama – The No. 13/14 ranked LSU Tigers took another step forward to a possible Southeastern Conference basketball championship by outscoring Alabama 17-10 in the final five minutes to record a 74-69 victory Saturday at Coleman Coliseum.

The Tigers remain tied for the league lead with Tennessee, a home winner over Kentucky on Saturday, at 14-2 with two games to play. Kentucky is a game back at 13-3.

The win was just LSU’s fifth in the last 25 years in Coleman Coliseum and was the Tigers eighth consecutive road win in SEC play. The Tigers 8-0 mark on the road with one road game to play ties the school mark of eight road wins in a season originally set by the 1980-81 team.

Skylar Mays had 16 second-half points to lead LSU to the victory with 20 total. Mays also had six rebounds, three assists and three steals. In the final five minutes, Mays had 10 of LSU’s final 17 points.

Javonte Smart got LSU off to a good first half start with 13 points and finished with 19 points, four assists and four steals.

Alabama, down one at the half, had rallied after LSU had taken an eight-point second half lead (39-27) to flip the game and take a six-point advantage of their own twice, the last at 49-43 with 10:38 to play in the game.

But the resilient Tigers came back as has been the norm this season.

Reid got a rebound layup, Mays hit two free throws and Kavell Bigby-Williams scored a layup to tie the game at 49-49 with 8:37 to go.

The lead shifted back and forth over the next three minutes with Petty getting a trey with 5:10 to play to go up 59-57. That would be Alabama’s final lead of the contest.

On LSU’s next possession Smart found Darius Days in the right corner of the court and he deposited a three-pointer to put LSU up for good at 60-59 with 4:55 to play.

Days would also have LSU’s next basket at the 3:59 mark as Mays dropped another pass his way for a layup and a 62-59 lead. Alabama couldn’t score and Mays drove and got the bucket by himself to push the lead to 64-59 with 3:19 to play.

Alabama would get a couple of inside buckets to cut the margin to one at 64-63 as the game entered the final 90 seconds. But Mays would score inside and then following a steal by Waters, Mays took a pass from off the backboard by Waters and dunked it to give the Tigers a 68-63 advantage with 41 seconds to play.

Alabama missed and the Tide was forced to foul and LSU made all six free throws in the final 30 seconds for the winning margin.

The Tigers have one final road test on Wednesday night at 6 p.m. CT when they travel to Gainesville to take on the Florida Gators. The game will be televised by ESPN2 and broadcast on the LSU Sports Radio Network. LSU’s final regular season home game is Saturday, March 9, at 7:30 p.m. at the Maravich Center against Vanderbilt.