No. 4 Beach Splits Day One in Boca Raton 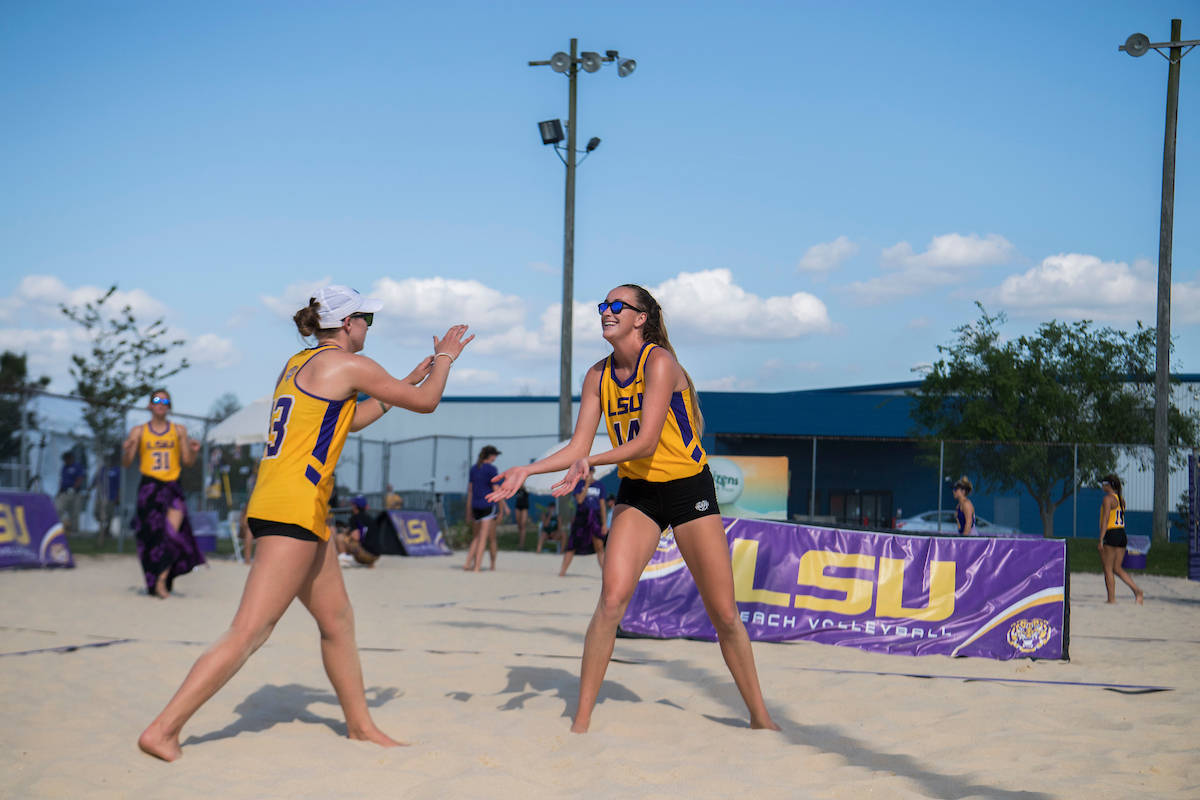 BOCA RATON, Fla. – After going 4-0 in its opening weekend, the No. 4 LSU Beach Volleyball team split its first day at the Beach Burrow Bash hosted by Florida Atlantic. The Tigers fell to No. 5 Florida State Friday morning, but came back to beat No. 18 FAU in the afternoon.

“Today was challenging,” said head coach Russell Brock. “We have to figure out how to be more efficient in our play. We get in way too many third sets and we’re not nearly as efficient as we should be. When you play talented teams who come to battle with everything they have, that will end up costing you.”

The two highest ranked teams from the east, No. 4 LSU and No. 5 FSU met up Friday after the Tigers defeated the Seminoles for the first time in program history last weekend. Freshman Allison Coens and Sophomore Hunter Domanski took the second set on Court 5, 21-13, after falling in the first set, 21-17. In the deciding set, the LSU duo fell 15-17.

Graduate transfer Taryn Kloth and junior Maddie Ligon tumbled on Court 4. They took the first set, 21-12, but were unable to pull out the win in a tough second set, 26-24. Kloth and Ligon fell in the third set as well, 15-12.

The reigning AVCA and CCSA Pair of the Week, Claire Coppola and Kristen Nuss won their fifth match in a row, earning the straight-set victory, 21-18 and 21-19, to get the Tigers on the board. The Seminoles would clinch the match moments later though on Court 2 when junior Olivia Powers and freshman Ashlyn Rasnick-Pope fell in two sets, 21-16 and 21-17.

Senior Toni Rodriguez and Kelli Agnew fell on Court 3. After taking the first set, 21-18, they dropped the second set, 21-18. The LSU duo trailed 2-0 in the third set when FSU clinched on Court 2 as LSU forfeited Court 3 to let its pair rest for its afternoon match against Florida Atlantic. The Tigers fell 3-2 to the Seminoles.

“Everything was running significantly behind and there had been conversations about trying to finish the day before it got dark,” Brock explained. “Rather than play a third set that wouldn’t have altered the result, we agreed to end the match by forfeiting the third set.”

Senior Ashley Allmer and sophomore Kahlee York fell in straight-sets on the extra court, 21-13 and 21-19.

Against FAU in the afternoon, LSU came back strong to earn a 3-2 win. Coens and Domanski started the Tigers off strong sweeping Court 5, 21-13 and 21-17. Kloth and Ligon dropped the first set on Court 4, 21-19, but battled for a 24-22 win in the second set, forcing a third set. The LSU duo battled, but were ultimately unable to take the final set, dropping it 18-16 to even up the match at one apiece for LSU and FAU.

“Our job tonight is to refuel and recover,” said Brock. “We have two tough conference matches tomorrow that will need our full attention.”

The Tigers will face No. 10 South Carolina on Saturday at 7 a.m. CT and will close out the weekend at 1 p.m. against UAB.