No. 1 Baseball Explodes in 17-4 Victory vs. Southern 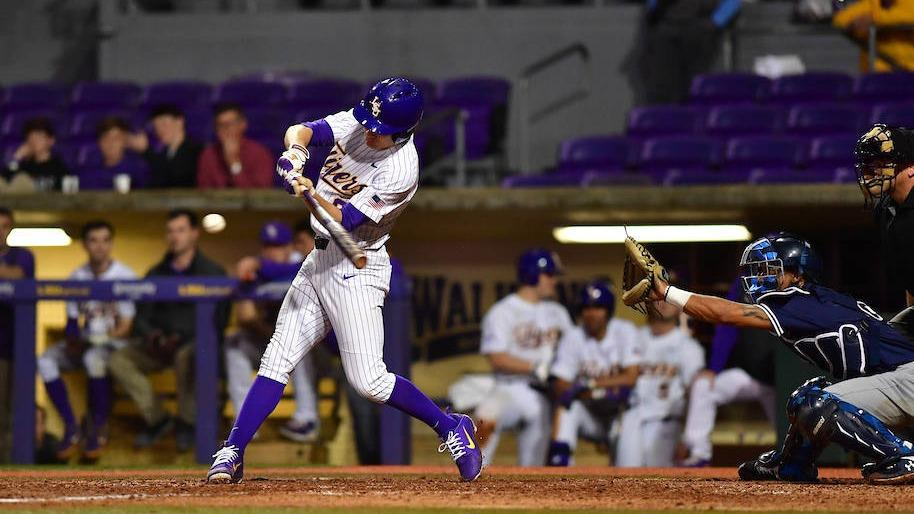 BATON ROUGE- Senior right fielder Antoine Duplantis went 4-for-5 with five RBI as the No. 1 LSU baseball team’s offense exploded for 18 hits on the way to a 17-4 victory against Southern University on Wednesday night in Alex Box Stadium, Skip Bertman Field.

With the win, LSU improved to 8-0 on the season while Southern fell to 4-3.

The Tigers travel to Austin, Texas, for a three-game series against the No. 19 Texas Longhorns beginning Friday, March 1, at 6:30 p.m. CT in UFCU Disch-Falk Field. All three games will be aired on the Longhorn Network, and fans can listen to the game on the LSU Sports Radio Network, including 98.1 FM in Baton Rouge. Free audio streaming of the LSU Sports Radio Network broadcast is available on www.LSUsports.net/live.

“I am really proud of our guys,” head coach Paul Mainieri said. “I was a little nervous about what kind of focus there would be tonight. We were all geared up to play South Alabama yesterday, and then, that didn’t happen. Then of course, we have a big series we are leaving for tomorrow in Austin. I was a little bit afraid we might not come out here today and have the focus and attention to detail. I couldn’t have been more wrong. We came out here and I thought we played really well right from the start. We had a lot of big hits, everybody threw the ball great on the mound, and we played flawless defensively. It was a good game for us. I told our guys they can enjoy it for about 10 minutes and then it is time to forget about it and get ready to go for a big series this weekend.”

LSU starter Eric Walker (1-0) was dominating in his first start since June 19, 2017 in the College World Series second round game. The sophomore right-hander fired two innings and struck out three on his way to earning his first victory of the year.

The Tigers put up eight runs in the bottom of the first inning. Shortstop Josh Smith and center fielder Zach Watson were in scoring position after reaching on an error and drawing a walk respectively. A fielding error by the first baseman on a ground ball by left fielder Daniel Cabrera drove in Smith before designated hitter Saul Garza poked a RBI single through the left side to put runners on the corners. First baseman Cade Beloso blasted his second home run of the year to right field, a three-run shot, to extend the LSU lead. With two outs and runners on first and second, Smith doubled to left-center to drive in another two Tiger runs, and Watson singled in the next at-bat to put runners on the corners for right fielder Antoine Duplantis, who ripped an RBI single to center field to round out the bottom half of the first inning.

In the bottom of the second inning with Beloso on second after an error by the shortstop, shortstop Hal Hughes ripped a single to center field to make it a 9-0 game.

After a walk by third baseman Chris Reid and a double by Watson put runners in scoring position, Duplantis slapped a two-run single up the middle. The senior moved to third after back-to-back singles by freshman Giovanni DiGiacomo and CJ Willis loaded the bases before Beloso sent a sacrifice fly to left field to make it a 12-0 game.

In the bottom of the fifth inning with one out and the bases loaded after a pair of walks and a fielder’s choice, Reid blasted a two-run double to left-center, driving in shortstop Hal Hughes, catcher Braden Doughty and second baseman Drew Bianco. Reid was standing on second with two outs when Duplantis recorded his third hit of the night, a single up the middle, to put the Tigers up 16-0.

With Watson on third after a double and a wild pitch, Duplantis put his fourth hit of the night into right field as LSU took the 17-0 lead after seven innings.

The Jaguars plated their first two runs to make it a 17-2 game in the top of the eighth inning. With runners on after a walk and a base hit, third baseman Tyler LaPorte singled up the middle. Center fielder Javeyan Williams scored on a fielder’s choice with one out.

In the top of the ninth, second baseman Zavier Moore doubled to left field to drive in another Jaguar run, and Moore scored with two outs in the inning on a wild pitch, finalizing the score at 17-4.

Cole Henry, Chase Costello, Ma’Khail Hilliard and Clay Moffitt allowed only three hits, walked one and struck out six in a combined five innings of work.

Freshman Rye Gunter pitched 0.1 innings and gave up two runs on two hits with two walks and one strikeout. Riggs Threadgill threw the final 1.2 innings and allowed two runs on one hit with one walk.