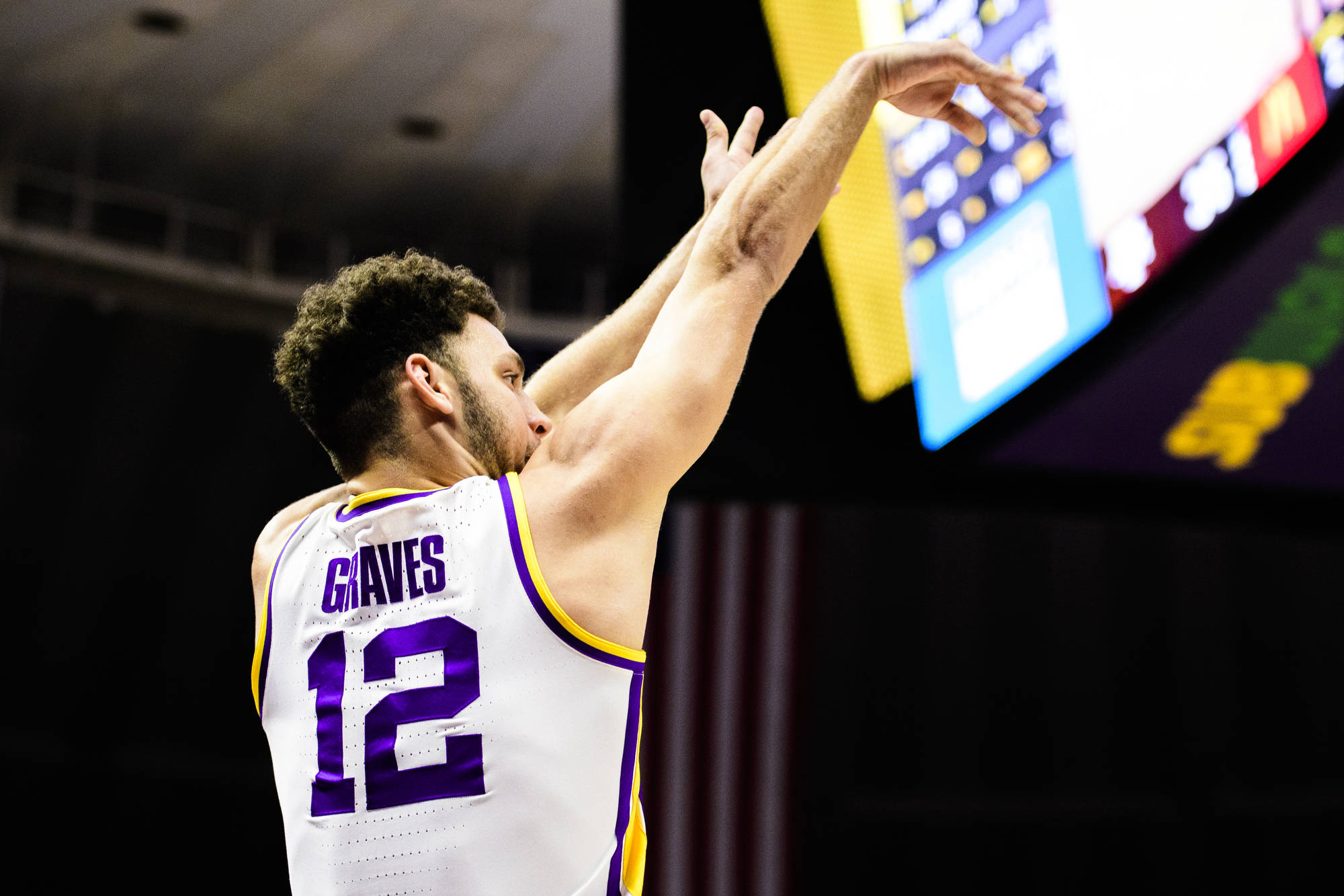 Some watching LSU’s 66-55 win over Texas A&M on Tuesday night might’ve overlooked a scoreless 14 minutes off the bench from a former walk-on.

When Will Wade looks at Marshall Graves‘ evening, however, he sees that which he has been emphasizing with greater urgency as the Tigers (23-5, 13-2 SEC) hold a share of the SEC lead with three games left to play: championship traits.

It was a microcosm of his

It’s those traits – rather than the title itself – Wade’s turning his team’s focus toward, even in the hours after a win over the Aggies.

“We just try to take it day by day, hour by hour. We talk more about championship traits and what goes into it than winning it, but our guys certainly know what’s at stake. We have three games left, and we control it.”

Take Graves, for example. After playing seven minutes in the Tigers’ 82-80 win over Tennessee on Saturday, the junior guard doubled his playing time on Tuesday. It was part necessity – sophomore guard and leading scorer Tremont Waters missed his second straight game with an undisclosed illness – but also part merit.

For Wade, Graves – who was a walk-on for two years before earning the scholarship left behind by his high school and college teammate, the late Wayde Sims – sums up one of the key championship traits he constantly preaches: do simple better.

“You don’t have to do anything crazy to win championships,” Wade says. “You just have to do the simple things well. My confidence in Marshall is a lot higher now. You never know how he’s going to react in the game. He was like a robot out there. He did exactly what you were supposed to do defensively. He was phenomenal. He does all the simple things really well.”

Another trait of note: championship teams, in Wade’s words, “win the game within the game.” That means protecting the ball – the Tigers turned it over just nine times on Tuesday, their second straight game under their game goal of 10 or fewer. That means getting to the line and winning on the glass. That means preventing baseline out of bounds scoring on one end and generating it on the other.

That means winning possessions like Wade wants his team to approach their days: one at a time.

Naz Reid‘s showing Tuesday embodies yet another characteristic of championship teams – the ability to move on to the next play. Reid scored a single point, missing all nine field goal attempts, in the Tennessee win, but he responded with a game-high 18 points and 11 rebounds against the Aggies.

“When shots don’t fall, you’ve got to do something else besides score: defend, rebound,” Reid says. “I was able to come out tonight, and my teammates were able to help me score the ball and rebound.

“Tennessee’s in my rearview. We were focused on Texas A&M. I wasn’t able to score the ball like I wanted to (vs. Tennessee), but doing other things on the floor shows I can do more than just score: defending, rebounding, blocking shots, whatever I can do to help the team win.”

Reid’s night was atypical in its order. Normally a second half force – he entered the game averaging 10.4 points and 4.1 rebounds in the second halves of SEC games, versus 3.9 points and 3.4 rebounds in first halves – the freshman dominated early on Tuesday, nearly recording a double-double (10 points, 8 rebounds) in the first half alone.

“He’s had some bad first halves and some really good second halves, but he’s been able to self-correct in the game, which is the hardest thing to do – to positive self talk and self correct in the game,” Wade says. “He’s been phenomenal. He’s got such a mature approach about him. That allows him to be successful.”

Reid wasn’t the only freshman stepping up against the Aggies. Javonte Smart proved master of the ‘next man up’ philosophy. In his second straight start at point guard in Waters’ absence, the freshman was solid as a rock, following up his 29-point showing against Tennessee with 17 points and 7 rebounds on Tuesday. He scored 12 in the second half on 5-of-9 shooting, burying the Tigers’ only two threes of the night.

Not everything went right for the Tigers, who shot just 34.8 percent from the floor and 10.5 percent from 3. The Aggies grabbed 12 offensive rebounds, something Wade noted his team would have to correct before its trip to Tuscaloosa this weekend. LSU also got zero points from its bench, though all five starters did reach double figures.

But Wade saw some of those vital traits on the floor. One of the highest-scoring teams in the SEC showed they could grind out a defensive battle. They guarded – hard – holding the Aggies to 32 percent shooting from the field and 18 percent from deep.

For the second straight game, the Tigers took the scouting report from shoot around to the floor, executing as well as Wade’s seen them execute all season. Playing their third game in six days and battling nicks and bruises across the roster, they dug in and did something that hasn’t been a certainty all season: followed up a big win over a highly-ranked foe with another win over a lesser-ranked foe.

“We had a mature way about us,” Wade said. “You try to learn from your mistakes throughout the year. I think we learned and got better from some of the situations we had early in the year where we didn’t respond as well after big victories.”

This big victory sets the stage for another on Saturday. A win over Alabama would leave LSU atop the conference entering the final week of play. That won’t be what Wade talks with his team about in these final days as the end nears and pressure mounts. They’ll talk about having the right traits, staying in the moment. They’ll try, like Graves, to be robotic – precise executers of their coach’s commands.

Something special is within reach.

“That’s what our eyes are on,” junior Skylar Mays – who scored his 1000th career point on Tuesday – said of a potential league tile. “We know we control our own destiny. We’ve just got to win out. Obviously, we have to focus on Alabama and take it one game at a time, but it’s right there. I think we’re going to play even more hungry the closer we get.”