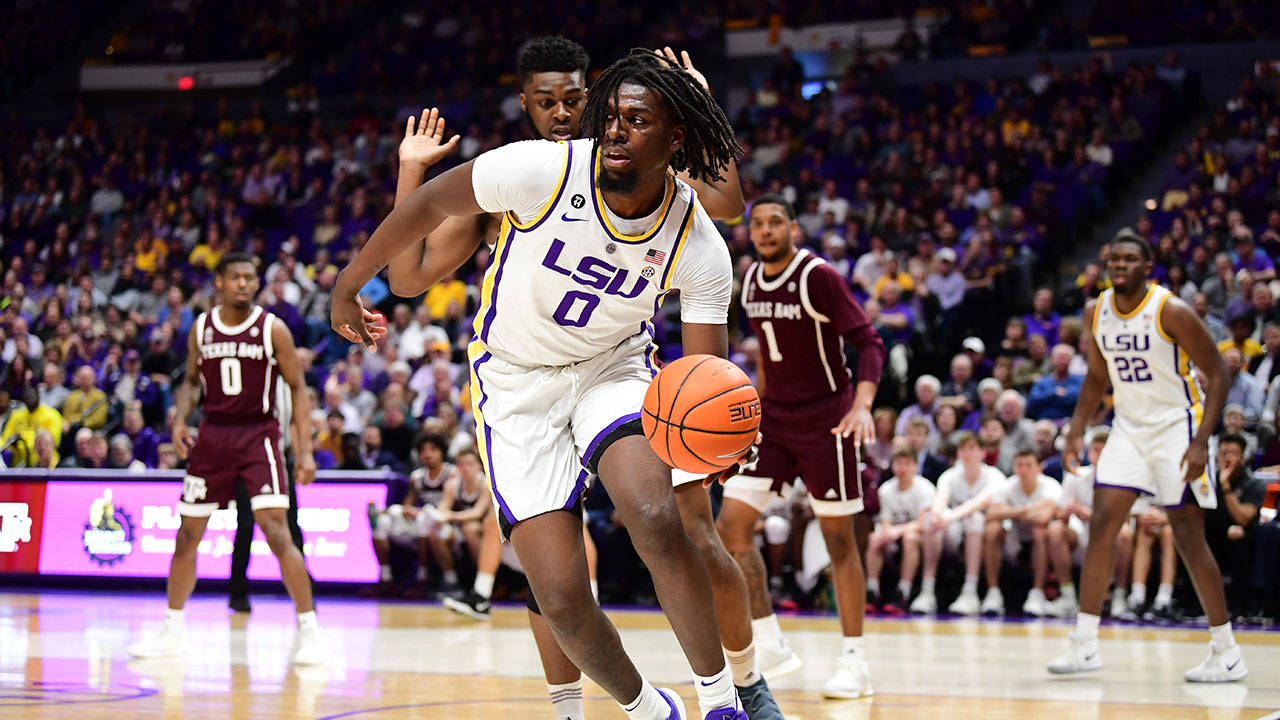 LSU’s five starters where all in double figures scoring and accounted for all of the Tigers’ points.

Both LSU (35 percent) and Texas A&M (32 percent) struggled from the field. However, the Tigers scored 17 points off turnovers and maintained at least a nine-point lead over the final 28 minutes.

With 8:26 remaining in the first half, Mays made the first of two free throws to reach 1,000 career points and put LSU ahead 22-10. He became the 41st Tiger to reach the milestone.

A three-point play by Bigby-Williams capped a 12-0 run and gave LSU its largest lead of the game, 34-13, late in the first half.

The Aggies chipped away at the LSU lead midway through the second half, trimming its deficit to 47-37 with 11:56 remaining. However, Smart answered with seven points to extend the Tigers’ advantage to 54-39.

Both teams struggled from the field down the stretch, combining for only one field goal in a four-minute span until a dunk by Taylor with 3:31 to play. LSU led 61-47.

Opening statement…
“Good win. I thought we set the tone early with our defense. I’m really proud with how our guys came out. They came out of the gate really guarding very, very good there. We were balanced. We won the game the way I like to win the game. Forty points in the paint, 18 from the free-throw line. Fifty-eight of our 66 points were from the paint and the free-throw line. Only turned the ball over nine times. That’s two-straight games we’ve had under 10 turnovers which has been tremendous. We had a season high for deflections this game. We were all over the place with our hands. Our hand activity was great. Overall it was just a good, good win. The second half was a little bit jittery, but at that point it was going to be hard for them to come back without (TJ) Starks. We were just trying to get out of there with a win. It was our third game in six days. It’s been a rough six days. We have a couple guys banged up, nicked up – nothing serious – and we just needed to survive this, get a day of rest tomorrow and prepare for Alabama. It was good to have Tre (Tremont Waters) back on the bench. It was good to have him back on the bench. He’s doing much better. It was our call to sit him tonight. He wasn’t quite 100-percent. He’s very, very close. I suspect he’ll practice with us for a few days and he’ll be ready to go against Alabama. He probably could have maybe played a little bit tonight, but he hadn’t practiced and hadn’t been real active so we didn’t think that’s be real fair to him or the team. We want to make sure he’s ready to go Saturday at Alabama.”

On the key to coming out with so much energy to begin the game…
“Our guys prepared well, guarded well, we didn’t give them opportunities to get out in transition and get them rolling. I thought our guys – we had a mature way about us. You try to learn from your mistakes throughout the year. I think we learned and got better from some of the situations earlier in the year where we didn’t respond as well.”

On how important the 40 points in the paint were having gone 2-of-19 from three…
“Huge. We wanted to get the ball into the paint. Unfortunately, (Josh) Nebo was just blocking them everywhere. You’ve got to keep challenging them in there, keep going to the rim, keep trying to draw fouls. The last two games we really executed our game plan. We’ve gotten our scouting report in the game. Twelve (Chris Collins) kind of took the bait a little bit on some shots early in the game, which helped us out. I thought our guys really did a nice job following the scouting report.”

Opening Statement
“I was really impressed with LSU’s defensive intensity. Their entire defense is really hard to score against. When you try to penetrate the defense they give you a hard time because they guarded but in the first half we had 10 turnovers and we shot too many threes but it had to do with LSU’s defense.”

Update on TJ Stark’s injury
“He had a shoulder injury, it’s pretty serious. They took him to the hospital and I don’t know if it’s separated or not.”

Thoughts on second-half rebounding efforts
“In the second half we played our two bigs which we only did when we were up against Naz Reid and (Kavell) Bigby-Williams. We needed to get bigger. It helped us on our zone and slowed them up a little bit. We only turned the ball over twice in the second half and it took away some of the transition advantages. We did a decent job of keeping them off of the glass.”