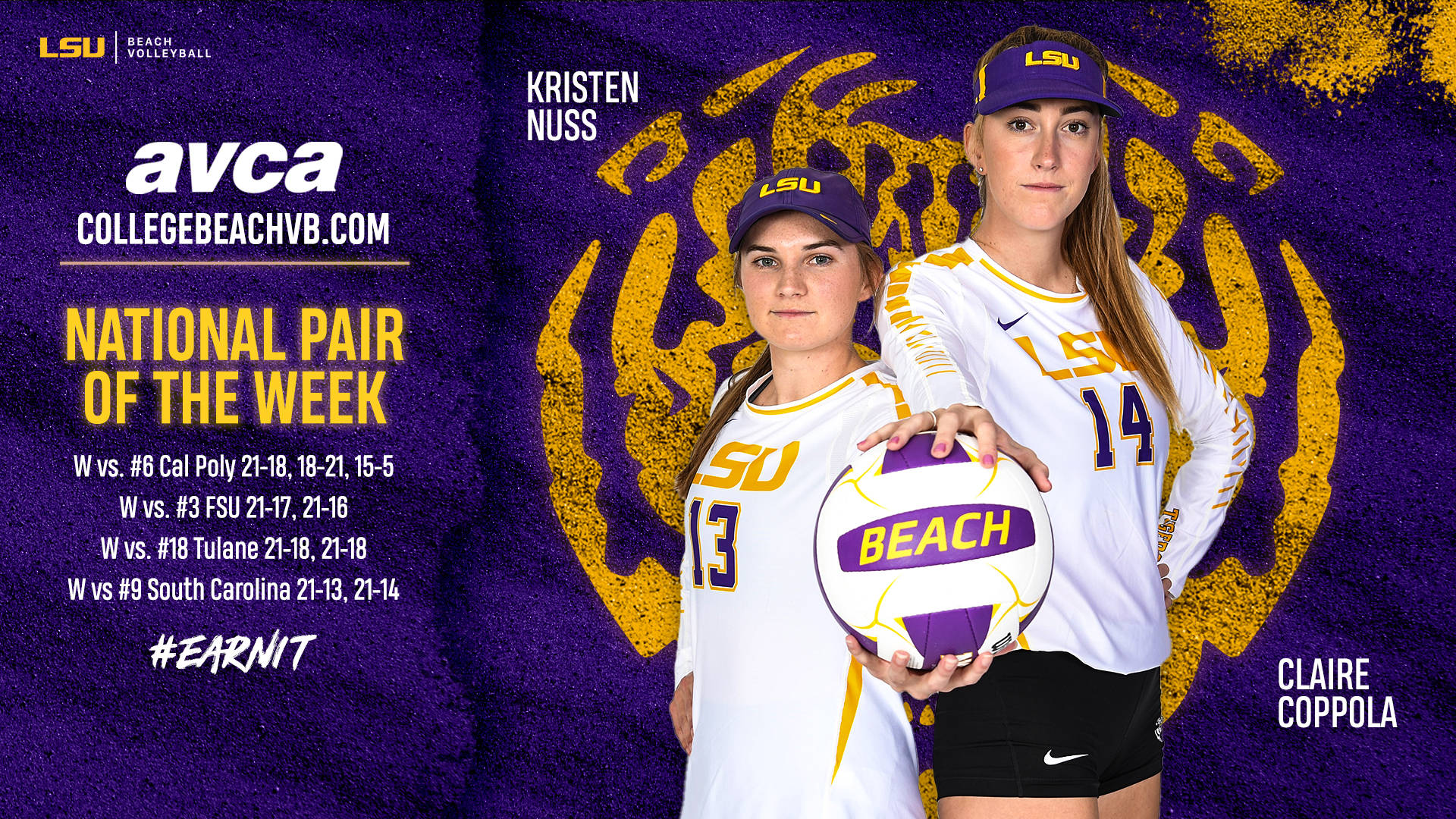 BATON ROUGE – Claire Coppola and Kristen Nuss were named the AVCA/collegebeachvb.com National Pair of the Week on Tuesday for their 4-0 performance in Tallahassee last weekend.

The Tigers’ Court 1 duo won all four of its matches against pairs from four top-20 teams last weekend, helping LSU leapfrog to No. 4 in the nation, the program’s highest ranking in its six-year history.

Coppola and Nuss opened up the weekend with a three-set victory against Emily Sonny and Torrey Van Winden of No. 6 Cal Poly. After dropping the first set, 21-18, the LSU duo stormed back to take the second set, 21-18. In the deciding set, Coppola and Nuss did not play around, capturing a 15-5 victory.

In Coppola and Nuss’ final match on Saturday, the CCSA All-Preseason pair from LSU faced another All-Preseason selection in Brooke Kuhlman from No. 3 Florida State along with her partner Payton Rund. Coppola and Nuss made swift work of the FSU pair in two sets, 21-17 and 21-16, helping lead LSU to its first victory over Florida State in program history and handing the Seminoles their first loss in CCSA play since joining the conference.

On Sunday, Coppola and Nuss toppled another CCSA All-Preseason player in Kaylie McHugh from No. 18 Tulane and her partner Eva Torruella in straight-sets, 21-18 and 21-18. The LSU pair finished the weekend with its third consecutive straight-set victory, 21-13 and 21-14, over Cadie Bates and Shannon Williams from No. 9 South Carolina.

Coppola and Nuss currently rank No. 5 and 6 in the collegebeachvb.com MoVR ranking which is designed to provide information about players’ skill development as demonstrated from previous match outcomes.

This is the second time that Coppola and Nuss have been named national pair of the week. The LSU duo earned the honor in 2018 when it marched to four straight-set victories, including three over top-ranked teams at the GCU Beach Tournament.

The defending CCSA Pair of the Year of Coppola and Nuss led the Tigers to their first undefeated opening weekend since 2016 and now the Tigers have cracked the top-5 for the first time in program history.

LSU is back in action Friday and Saturday in Boca Raton, where it will face No. 5 Florida State, No. 18 Florida Atlantic, No. 10 South Carolina and UAB in the Beach Burrow Bash at FAU.