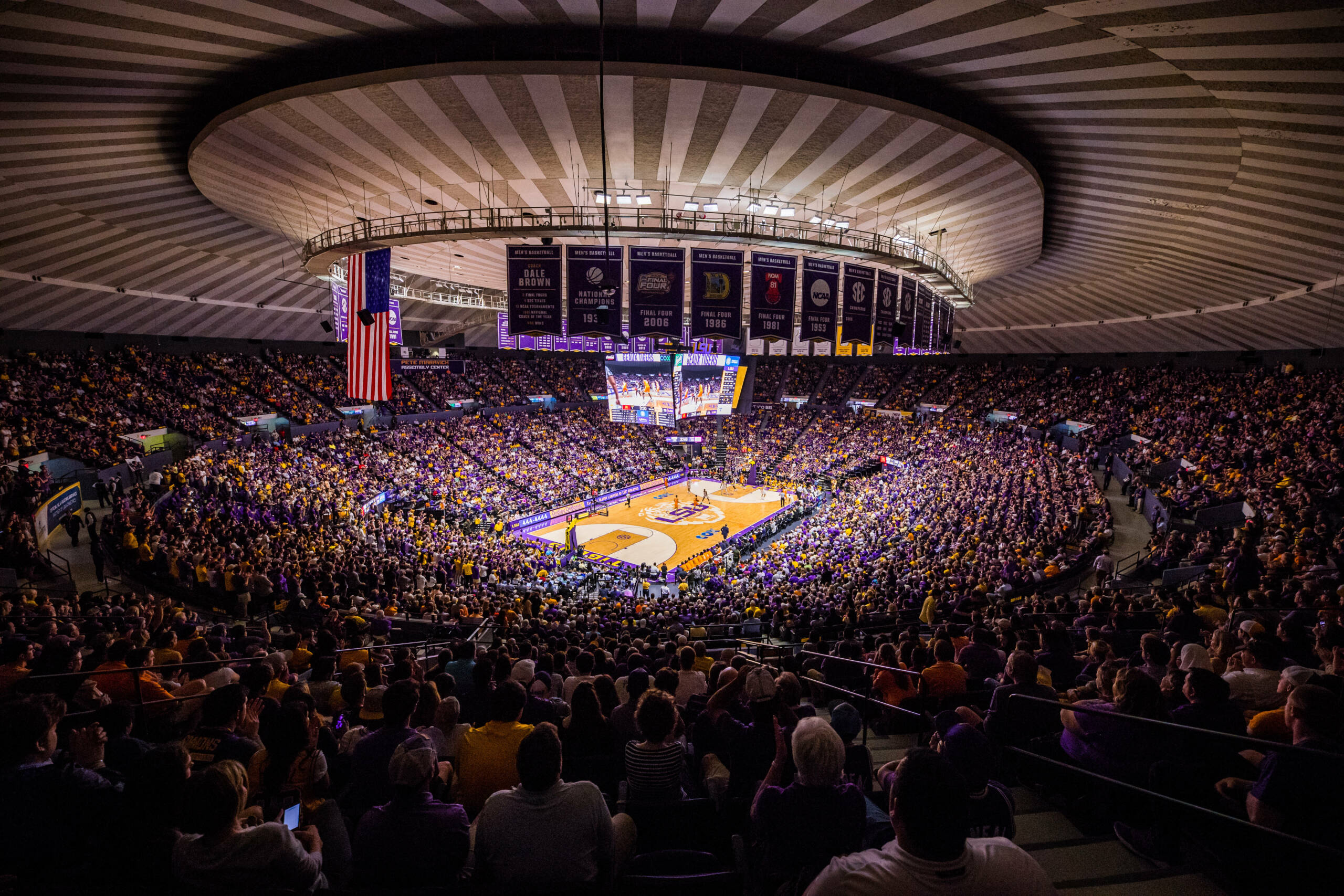 BATON ROUGE – The LSU Tigers basketball team will be looking for another solid performance Tuesday at 8 p.m. CT when it hosts Texas A&M at the Pete Maravich Assembly Center.

LSU, ranked No. 13 in the AP poll, will try to continue to play at a high level just days after an emotional 82-80 overtime win over then No. 5 Tennessee before the sixth largest crowd in the present seating configuration of the Maravich Center.

The game will be televised on ESPN2 with Dave Neal and Andy Kennedy on the call and broadcast on the LSU Sports Radio Network with the Voice of the Tigers Chris Blair and former LSU head coach John Brady at www.LSUsports.net/live (Eagle 98.1 FM in Baton Rouge).

Tickets are available during the day on Tuesday at the LSU Athletics Ticket Office and online at LSUtix.net. Tickets will go on sale at the upper concourse ticket windows of the Maravich Center at 6:30 p.m. prior to the game. LSU Students are admitted free with a valid student ID.

LSU, Tennessee and Kentucky are all tied for the Southeastern Conference lead with four games to play. After A&M, the Tigers must travel to Alabama (Saturday, 11 a.m.), Florida (March 6) and will close with a home game against Vanderbilt (March 9). If the season ended today, based on wins over Tennessee and Kentucky, LSU would be the No. 1 seed for the Southeastern Conference Tournament. That event is set for Nashville, March 13-17.

In the first meeting between Texas A&M and LSU in College Station at the end of January, the Tigers played a solid second half, outscoring the Aggies, 35-21, in the final 20 minutes to win 72-57. LSU out rebounded A&M, 45-39, which included 21 offensive rebounds that led to 21 second chance points.

Tremont Waters, whose status for Tuesday’s game has yet to be officially determined, had 36 points in the win at Reed Arena, hitting six treys. Darius Days had nine points and eight rebounds (including seven offensive). Naz Reid, Kavell Bigby-Williams and Marlon Taylor each had seven points.

Without Waters playing in the game Saturday and Naz Reid shackled with foul trouble and limited to just one point, Javonte Smart and Skylar Mays were able to run the offense efficiently with Smart having a career high 29 points and Mays hitting for 23 points, one off his career high of 24.

LSU Head Coach Will Wade met with the media Monday and here are some of his comments:

Opening statement…
“We’re coming off a good win over Tennessee and we have to quickly turn the page to Texas A&M. They’ve won four out of their last five in the SEC. They’re playing extremely, extremely well. We have to do a good job at protecting our home court and building off the big win on Saturday.”

On potential skepticism from players early in his career due to lack of background in basketball…
“I think if you show a good knowledge of what you’re doing and you work at things the right way, I think they (players) will respect that. I think it’s really just how you present things and making sure you’re on top with what you do. I try to be extremely detailed and organized with things, and I think if you do that, the players will respond to that.”

On having a personality that likes having high organization
“I’m just a linear thinker, so I like when everything lines up. Numbers and analytics certainly help everything line up.”

On if he spurred his line of thinking to others in college basketball
“I don’t know about that. It works for me because that’s how my mind’s worked, and it has worked. I don’t think other people are racing to do the things we do. It works for us, and it may not work for other people. I feel like it’s been successful for us, and maybe given us a bit of edge and helped us win some of these close games.”

“We’ve been fortunate this year and had some breaks, but I feel like our guys are prepared well. As long as we do the right things and continue to work hard, we’ll see what happens. I knew we were going to be better this year, but you never know how the chemistry and all that stuff will come together. The fact that the chemistry has come together so quickly has been the biggest surprise.”

On what Texas A&M has done well in their recent games
“They’re shooting the ball well. Savion Flagg has been playing at a really high level. He wasn’t playing as well earlier in the season, but he’s playing at a much higher level. (Wendell) Mitchell’s playing extremely well. They’re getting good defensive pressure from (Jay Jay) Chandler and certainly (TJ) Starks. I think they have a young group and had to adjust to losing (Admon) Gilder, and they’re just finding their way a little more as they go through conference play.”

On flipping a game plan like on Saturday against Tennessee
“It was a first. I’d like to not have to do it again, but that was a first.”

On Javonte Smart‘s confidence boost following his performance against Tennessee
“I think it was huge. He’s been great in our biggest games all season long, and this was no different. I think it was a big boost for him. He’s full of confidence now, definitely not lacking. I think it was naturally just a next step for him.”

On the team’s performance in big games being the message of motivation
“Every game from here on out is going to be a big game. Every game will have high stakes and a lot on the line. We have to be ready to go. Everybody’s playing for something at this point, you can throw the records out. Texas A&M’s playing for a bye, so everybody has something to play for. We have to make sure we stay hungry and desperate, and make sure we play with great purpose.

On potentially winning the SEC being a talking point to the team
“It’s just game by game right now. I don’t have to say a lot; our guys aren’t dumb. They know what’s out there.”

On if analytics are a big influence when switching from a Plan B to a Plan C
“Well you’re shifting workloads more. You shift usage rates from one person to another, you’re just shifting things. When you give another guy that usage rate or workload, you just need to have that guy step up and make plays, and that’s what happened. You just shift where you get your shots from and how you get your shots. But those guys have to step up, and that’s the main point. Not changing the game plan, but putting the players in the right position, and letting those players make the plays with their free mind. That’s what they did.”

“He’s a confident guy. He gets a lot of confidence from how he works, how diligent he is and how hard he studies film and studies the game. He’ll be fine.”

On if he expected to subpoenaed…
“I really haven’t been following it at all, that closely. I’ve been focused on our team. Like I said, I learned about it just before I walked in here.”

On if the timing of the report is frustrating…
“We’ve got to focus on playing A&M. My focus is on our team and our guys – staying locked in with them and helping them continue to win.”

On how gratifying it is to see Javonte Smart excel the way he did against Tennessee…
“It was great for Javonte. It was great for Skylar (Mays). It was great for Marshall (Graves). To see guys rise up in a big moment like that and take advantage of a huge opportunity like that – that’s why you coach and that’s the fun part in coaching, is being able to see that.”

On if he knew the stars would shine on Saturday…
“You never know for sure how they’re going to respond, but you get a good sense of it and a good taste of it while they’re in practice. We have a lot of confidence in Javonte and a lot of confidence in all of our guys. When we put them in there, we feel like they’re prepared and ready to go. Then it’s on them to go in there and make plays and that’s what they did. We have confidence in all those guys that we put in the game because they work hard.”

On the impact Wayde Sims makes on this team…
“It’s on our team’s mind. His locker is in there. Everyday it’s on our team’s mind and everyday it’s something that we think about. He’s with us every day We always want to make sure that we’re remembering him and keeping his memory front and center. It was great to see his parents after the game. I was texting with his dad (Wayne) last night. They’re very excited for our guys. Wayde’s still with us. He’s still apart of our team. Hopefully he’s smiling down on us and proud of how we’re doing.”