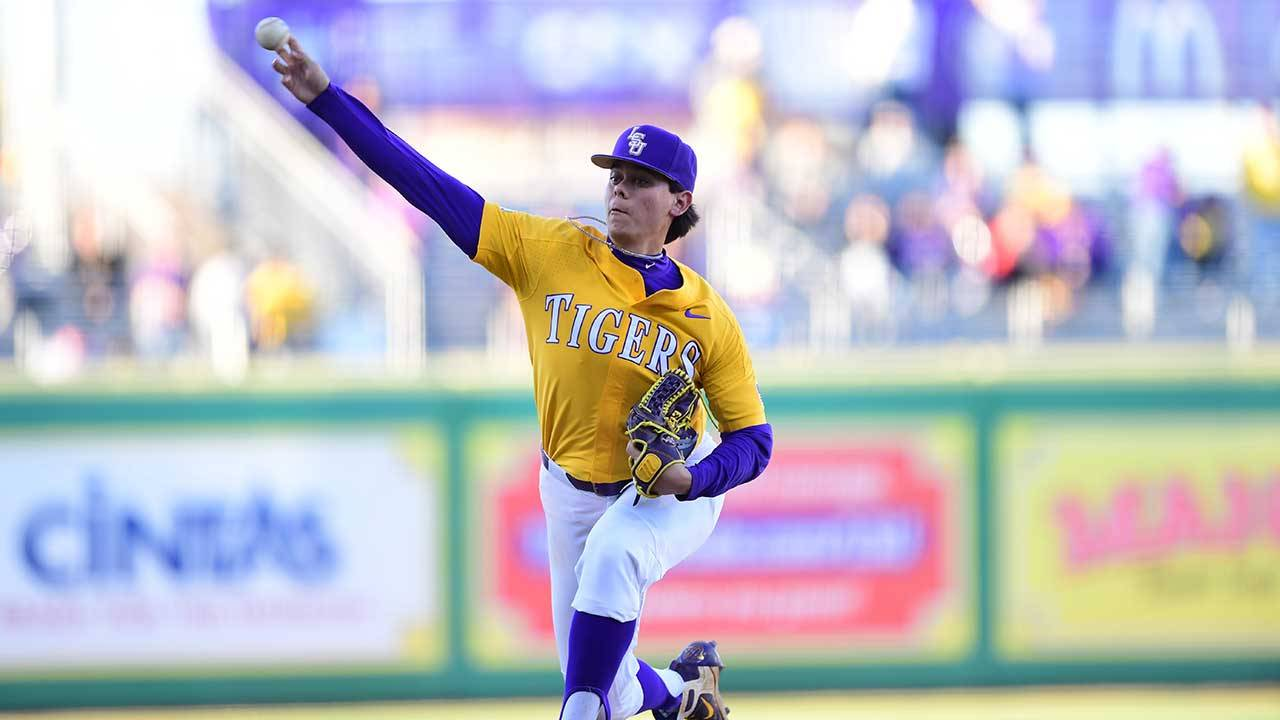 BATON ROUGE- Left fielder Antoine Duplantis slapped an RBI base hit to right field to plate the go-ahead run in the bottom of the seventh inning, and right-hander Todd Peterson worked a six-out save as the No. 1 LSU baseball completed the sweep against Bryant with a 4-3 win Sunday afternoon in Alex Box Stadium, Skip Bertman Field.

With the win, LSU improves to 7-0 on the season while Bryant drops to 2-4.

The Tigers return to action on Tuesday, Feb. 26 with a game against South Alabama at 6 p.m. CT in The Box. Tuesday’s game will be available online only through the SEC Network+, which is accessible through Watch ESPN and the Watch ESPN app. Fans can listen to the game on 100.7 FM in Baton Rouge.

“That was a hard-fought, tough victory that we found a way to win,” head coach Paul Mainieri said. “I told the players my only surprise about today is that the other two games were not just like this. These were really three good victories for us against this team. We did not take them lightly. We played a pretty good game overall. I am just happy we found a way to win at the end. I think it was our fourth close game in seven, so our team is really gaining a lot of confidence on how to win games with composure and poise. Nothing bad happens when you win close games.”

Junior Aaron George (1-0) earned his first career win after throwing 1.1 innings and striking out three. Peterson earned his first save of the 2019 season after tossing two innings. The junior gave up two hits and struck out one.

Bryant starter Steve Theetge threw five innings and gave up three runs—two earned—walked two and struck out three. Right-hander Nathan Wrighter suffered the loss, falling to 0-1 on the year, after allowing one run on three hits and walking one.

Shortstop Josh Smith and center fielder Zach Watson recorded back-to-back hits to lead off the bottom of the first inning. With one out, left fielder Daniel Cabrera was intentionally walked to load the bases, and designated hitter Saul Garza sent a ball deep to center field for a sac fly, scoring Smith. Watson scored with two outs as the Tigers tacked on their second run of the inning to take a 2-0 lead on first baseman Gavin Dugas‘ single to left-center.

With two outs and shortstop Jimmy Titus on third after taking a walk, stealing a base and advancing on a ground ball, catcher Sam Owens slapped a double to left-center, and Bryant cut the LSU lead to 2-1 in the top of the fourth.

In the bottom of the fourth with Dugas on first after drawing a one-out walk, third baseman Hal Hughes singled through the right side to put runners on first and second. Catcher Brock Mathis slapped a ball right to the third baseman, who flipped it to second for the fielder’s choice. Mathis was safe on the play, and Dugas scored on an errant throw by the second baseman to give LSU the 3-1 lead.

Bryant tied the game at 3-3 in the top of the sixth. Left fielder Ryan Ward led off the inning with a single to center field, moved to second on a passed ball and stole third. With two outs, Owens singled to right field to bring in Ward. Owens then stole second and scored on designated hitter Gaby Cruz’s base hit to center.

Watson singled up the middle and stole second with two outs in the bottom of the seventh before Duplantis singled through the right side to regain the LSU lead, 4-3.

Matthew Beck was the first Tiger out of the bullpen. The junior tossed 0.2 innings and allowed two runs on three hits with one strikeout.