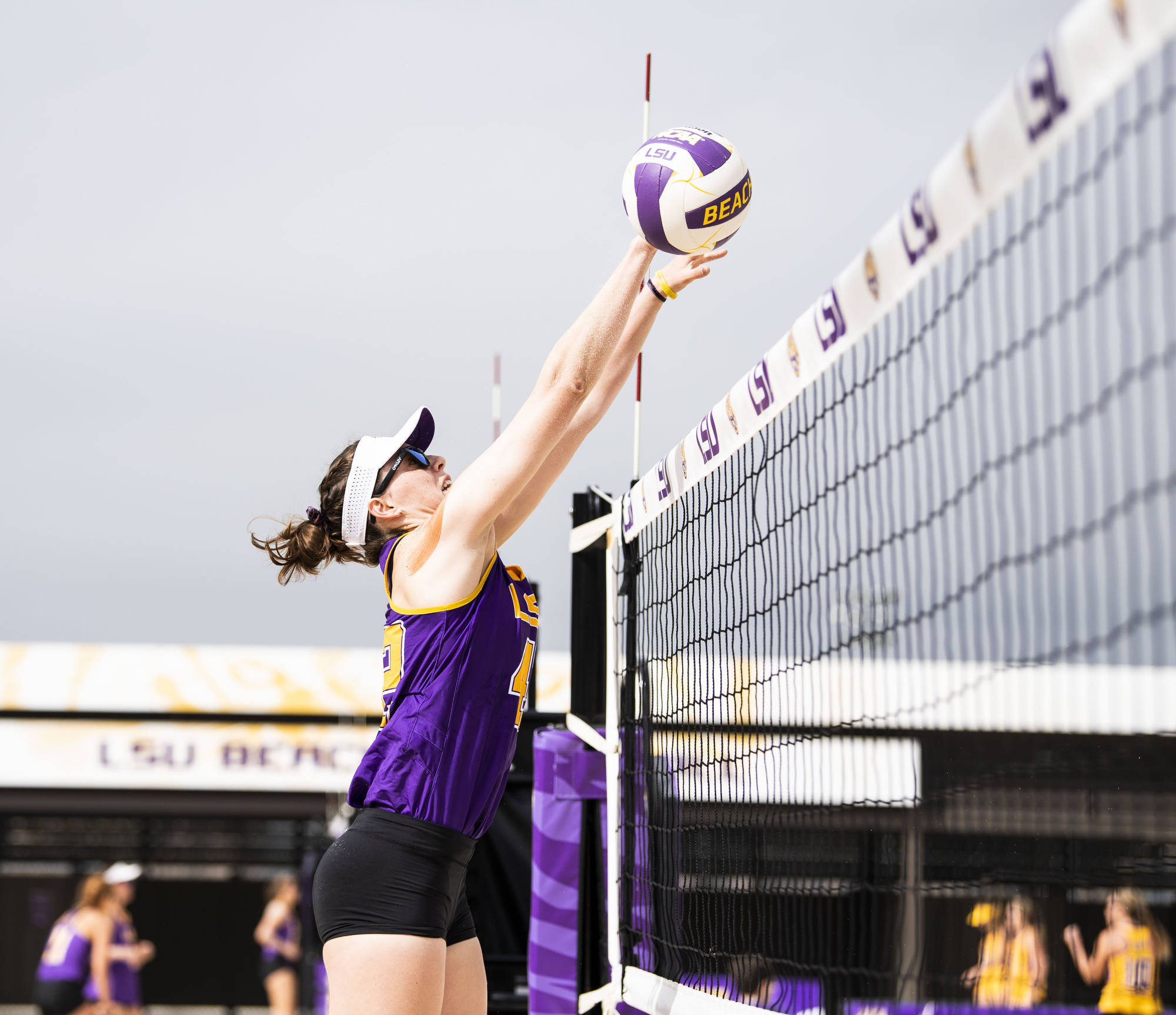 TALLAHASSEE, Fla. – After knocking off No. 6 Cal Poly and No. 3 Florida State on Saturday, the Tigers handled business against No. 18 Tulane and No. 9 South Carolina on Sunday to finish the weekend with an unblemished record.

“The wins today were really tough ones,” said head coach Russell Brock. “We know that Tulane and South Carolina always play really well against us. It’s a fight every time we take the sand.

“It’s hard not to be satisfied with a weekend with this weekend’s wins, but it’s also easy to see where we really need to work to improve as well. This week’s training will be critical as we look to improve before next weekend.”

To kick off day two in Tallahassee, LSU faced in-state foe, Tulane, and got the sweep. With heavy rain falling to start the match, all the courts played at once. Freshman Allison Coens and Sophomore Hunter Domanski started the Tigers off strong on Court 5, dominating the Green Wave. The LSU duo marched to victory in straight-sets, 21-11 and 21-12.

Shortly thereafter, the junior pair of Claire Coppola and Kristen Nuss finished off a straight-set, 21-18 and 21-18, victory to give the Tigers two courts. Junior Olivia Powers and freshman Ashlyn Rasnick-Pope kept the Tigers rolling with straight set victory for themselves on Court 2, 21-13 and 21-15, clinching the match for LSU.

With the skies at the FSU Sand Volleyball Courts clearing up, the Tigers were not finished. Senior Toni Rodriguez and freshman Kelli Agnew kept thing consistent for the Sandy Tigs. Set one was a battle, but the LSU pair pulled through with a 25-23 victory and then cruised to a win in set two, 21-14.

The only set that LSU would drop in the match was on Court 4 when graduate transfer Taryn Kloth and junior Maddie Ligon fell in the first set, 21-19. Kloth and Ligon rebounded nicely though in set two, winning 21-18. The LSU duo completed the sweep for the Tigers with a 15-10 victory in set three.

“I’m most proud of how we got big contributions from different teams in the lineup in each dual,” said Brock. “This group is shaping up to be a really solid team.”

Later in the day against the Gamecocks, Kloth and Ligon took the first set on Court 4, 21-15, but dropped the second set by the same score. After being tied at six in the third set, Kloth and Ligon were able to pull away for a 15-11 victory, picking up a court for the Tigers. On Court 5, Coens and Domanski took the first set, 21-17, but fell in set two, 21-18. The LSU duo was unable to get it done, falling 15-11 in the deciding set for their only loss of the weekend. LSU and South Carolina were tied at one court apiece as they headed to Courts 1-3.

Rodriguez and Agnew put the Tigers up 2-1 with a straight-set win on Court 3. The LSU duo took back-to-back sets, 21-19 in both, giving the Tigers an edge. The Sandy Tigs would clinch the win on Court 1 as Coppola and Nuss finished off a perfect weekend for both LSU and themselves. The Tiger’s top pair won in straight-sets, 21-13 and 21-14, for the third time this weekend.

“Claire and Kristen really made another big statement this weekend,” Brock said of his two Preseason All-CCSA players. “Their play has risen to another level and it shows how committed they are to excellence. They are leading this team in a big way”

Powers and Rasnick-Pope fell in two sets on Court 2, 21-19 and 21-14, but the Tigers were able to leave Tallahassee unscathed nonetheless.

LSU will be back in action next weekend, March 1-2, at the Beach Burrow Bash at Florida Atlantic in Boca Raton. The Tigers will have rematches from this weekend with Florida State and South Carolina along with matches against FAU and UAB.

“I’m looking forward to when we are clicking on at all five pairs,” Brock expressed. “That’s when we know that we will really be a team that can make some noise.”