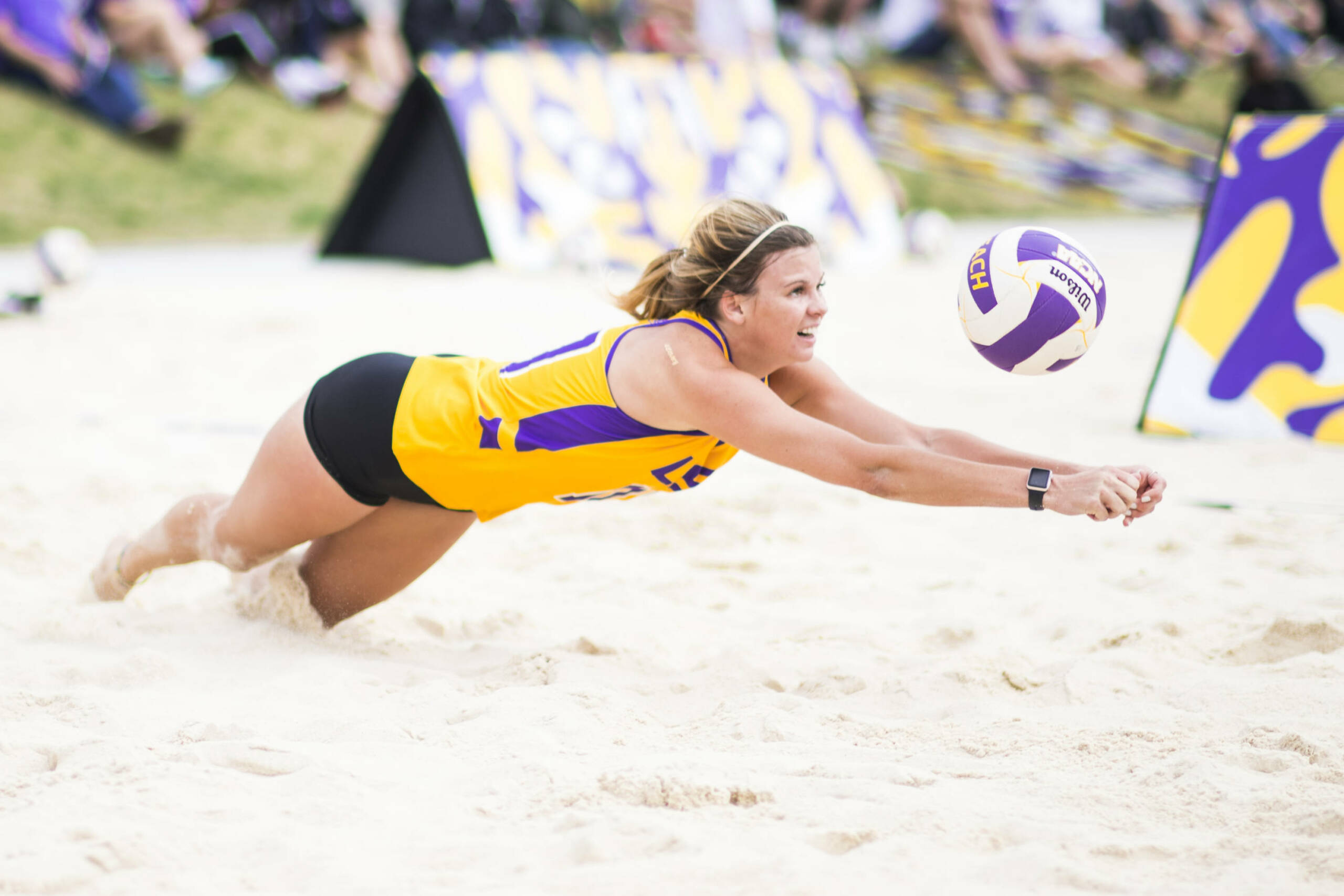 TALLAHASSEE – The No. 7 LSU Beach Volleyball team began its season on Saturday with 3-2 wins over No. 6 Cal Poly and No. 3 Florida State. This is the first time in program history that the Tigers have defeated the Seminoles.

The Tigers began the season the same way they did last season – with a win over Cal Poly. Freshman Allison Coens and Sophomore Hunter Domanski kick started the season for LSU with a two-set victory on Court 5 in straight sets. After taking set one, 21-19, Coens and Domanski battled and battled, ultimately coming up victorious in the second set, 31-29. Graduate Transfer Taryn Kloth and Maddie Ligon followed suit with a straight-set win of their own on Court 4, 21-13 and 21-17.

The Tigers would stumble slightly though before being able to get the victory. Junior Olivia Powers and freshman Ashlyn Rasnick-Pope fell in straight sets, 21-15 and 23-21, as did Senior Toni Rodriguez and Freshman Kelli Agnew on Court 3, 21-13 and 21-17.

It all came down to Court 1 where juniors Claire Coppola and Kristen Nuss, both members of the CCSA All-Preseason Team, were looking to earn the win for the Tigers. After taking the first set by a score of 21-18, the duo dropped the second set by the same score. Coppola and Nuss cruised to victory in the deciding set, 15-5, clinching the Tiger’s first victory of the year.

“Today really felt like our whole team was locked in and focused,” said Powers. “We held each other to a standard that we have been training for. It felt really good to know that everyone played well today. We know that’s what it will take to be great.”

Saturday afternoon, LSU was set to face FSU, a team that the Tigers had never before beaten. Kloth and Ligon were not able to get the victory on Court 4, falling 21-13 in two straight sets. On Court 5, Coens and Domanski rebounded. Despite dropping the first set, 21-23, the LSU pair responded with victories in back-to-back sets. Coens and Domanski won the second set, 21-19, and took the deciding set, 15-8, to snatch a court for the Tigers.

Coppola and Nuss did not need a third set against FSU like they did earlier in the day, taking the match in straight sets, 21-17 and 21-16. To clinch the match, Powers and Rasnick-Pope took care of business in straight sets on Court 2, 21-11 and 21-15.

Rodriguez and Agnew fell in three sets on Court 3. The duo took the first set, 23-21, but dropped the next two sets, 21-19 and 20-18. The damage had already been done by the Tigers though as they handed the Seminoles their first CCSA loss since joining the conference and their first loss east of California since 2015.

Seniors Olivia Beyers and Megan Davenport handled their business on the extra court as well. After falling in the first set, 21-11, the LSU duo bounced back and took the final two sets, 21-19 and 7-4 (the exhibition match ended early).

“When you put five players (Rasnick-Pope, Rodriguez, Agnew, Kloth and Coens) in the sand who have never played a college beach match, and you play them against that kind of competition, it’s a really tall task,” said Brock.

“Our returners did a fantastic job of leading. We made great progress as a program today.”

The Tigers will head back to work on Sunday against in-state foe No. 18 Tulane at 9 a.m. CT before finishing the weekend at 12:30 against South Carolina.

“Tomorrow will be another challenging day,” Brock said. “We know that we have to play at least as well as we did today so the task is to recover and rest. We still have work to do.”