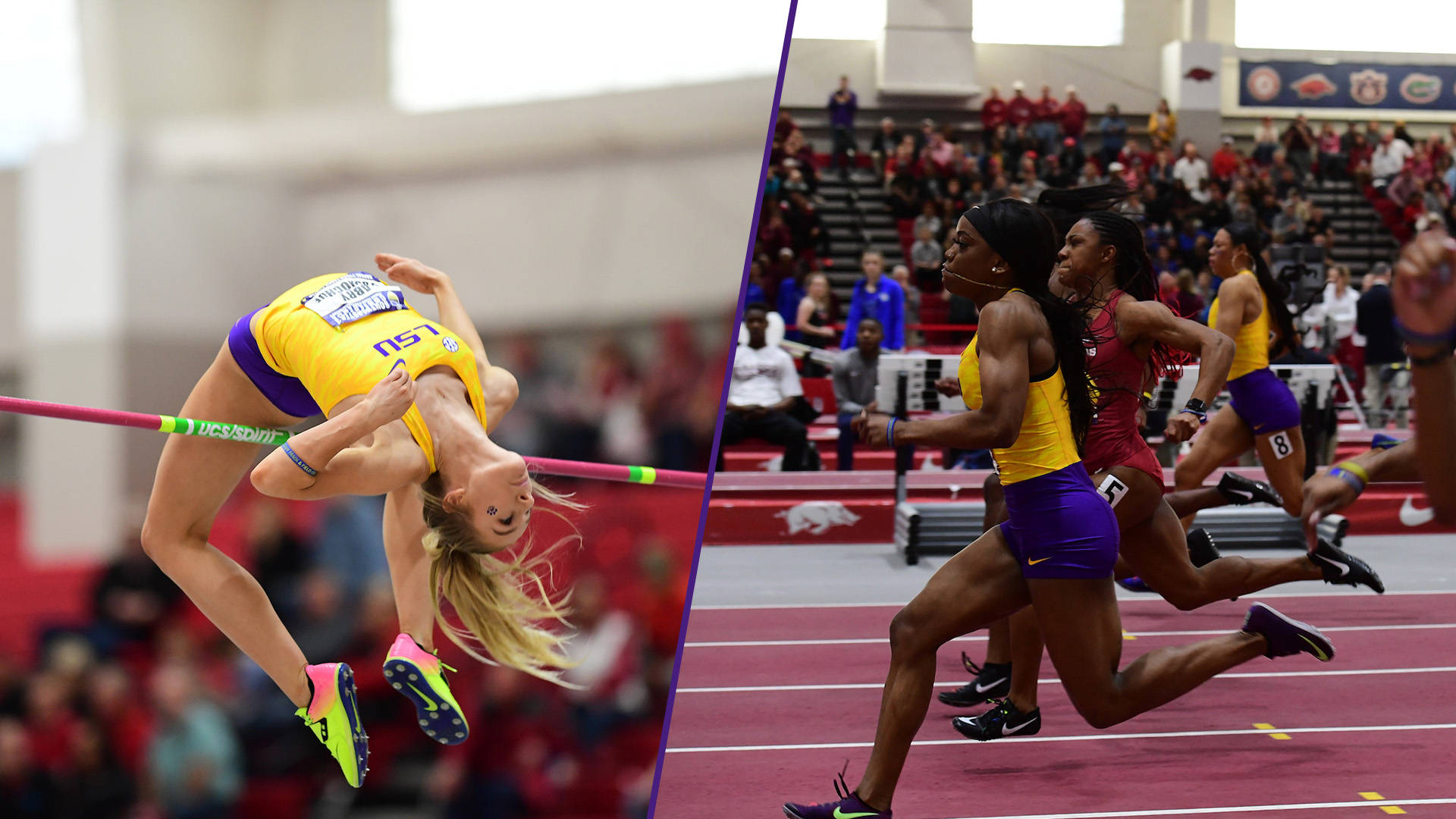 Kortnei Johnson, the best 60 meter sprinter in the nation, won her first-career SEC 60 meter dash title with a time of 7.23 in the finals. After getting out of the blocks a bit tardy, Johnson made up for the slow start with her top end speed and beat Kentucky’s Kianna Gray by four-hundredths of a second. Johnson’s title marks the fourth-straight title in the event for the LSU sprinters. Mikiah Brisco (2016, 2018) and Aleia Hobbs (2017) were the previous three winners. Freshman Ariyonna Augustine scored the first points of her SEC career with a seventh-place showing in the event. Johnson has now won four SEC titles (60 meter indoors and 4×100 meter relay three times outdoors). Johnson also returned to the track later in the day to score more points with a fifth-place finish in the 200 meter dash (23.43).

“My main job was to execute the process,” Johnson said after the race. “It’s not my best time, it’s not my best performance, but this is something I can build on. Anytime you win an SEC title, you’re doing something right. I didn’t get out the greatest, but I was able to run them down. I have a lot of things to work on between now and the NCAA Championships (in two weeks).”

Abby O’Donoghue won the first SEC title of her high jumping career to get the day-two scoring started for the Lady Tigers. The sophomore from Denham Springs, La., cleared a personal best height of 5′ 11.50” (1.82m) to outlast Abigail Kwarteng of Alabama. Both O’Donoghue and Kwarteng cleared 5′ 11.50”, but it only took O’Donoghue once while Kwarteng had to attempt the height three times. The personal best by O’Donoghue moves her up into No. 5 on the LSU indoor list alongside her mother, Kelli O’Donoghue; the mark also moved her inside the NCAA top 10 and solidified her a qualifying spot to the NCAA Championships. LSU became the second school in the last three years to sweep both the women’s and men’s high jump titles; Georgia was the last school to do it in 2017.

Jaron Flournoy was the second-fastest 200 meter dasher on the second day of the conference meet with a time of 20.66. He took second behind Mustaqeem Williams (Tennessee), who clocked a time of 20.65 as he barely outleaned Flournoy at the finish line. Dylan Peebles (20.79/5th place) and Akanni Hislop (20.88/6th place) joined Flournoy in the finals and scored points for the men’s squad. Hislop doubled up and scored another point for the men in the 60 meter dash final with a time of 6.77 for eighth place.

The men’s 4×400 meter relay closed out the meet with a bang clocking a season best of 3:04.69 to claim silver. Tyler Terry, Dylan Peebles, Correion Mosby and Jaron Flournoy combined to run that time that ranks fifth in the NCAA and eighth all time at LSU. Flournoy had the fastest split of the crew with a 45.54.

In the women’s 800 meter run, senior Ersula Farrow registered the best finish of her SEC career with a silver medal. Farrow circled the 200-meter track four times to clock a runner-up time of 2:05.51. Freshman Katy-Ann McDonald also scored in the event with a seventh-place finish (2:12.00).

The hurdling duo of Tonea Marshall and Brittley Humphrey couldn’t have run more similar times on the way to a three-four finish in the finals of the 60 meter hurdles. Marshall (8.094) narrowly edged Humphrey (8.098) at the finish line. The time for Humphrey was a season best and ranks as the 10th fastest in the NCAA.

In the men’s triple jump, Christian Miller leaped out to a season best of 51′ 4.25” for a fourth-place finish. With his five points, the men’s jumpers scored 41 of LSU’s 78 points.

Damion Thomas (7.81) and Arthur Price (7.83) racked up seven points for the Tigers in the 60 meter hurdles with fifth and sixth-place finishes, respectively.

Freshman RC Walbrook added three points to the men’s total with a sixth-place finish in the heptathlon. He totaled 4,435 points to set a personal best in the event and score at his first SEC meet. His full detailed point total can be found at FlashResults.com.

Jake Norris rebounded well after two fouls to start the weight throw and finished in sixth place with a heave of 68′ 3.25”. The women’s 4×400 meter relay of Rachel Misher, Milan Young, Brittley Humphrey and Kiya Oviosun closed the meet with a seventh-place showing (3:33.72/season best).

Julia Palin did not score in the 3,000 meter run, but she ran the fifth-fastest time in program history with a personal best of 9:50.16. She scored four points for the women on Friday night in the 5,000 meter run.