Mays, Smart, and Tigers Shine Amid Adversity, Yet Again 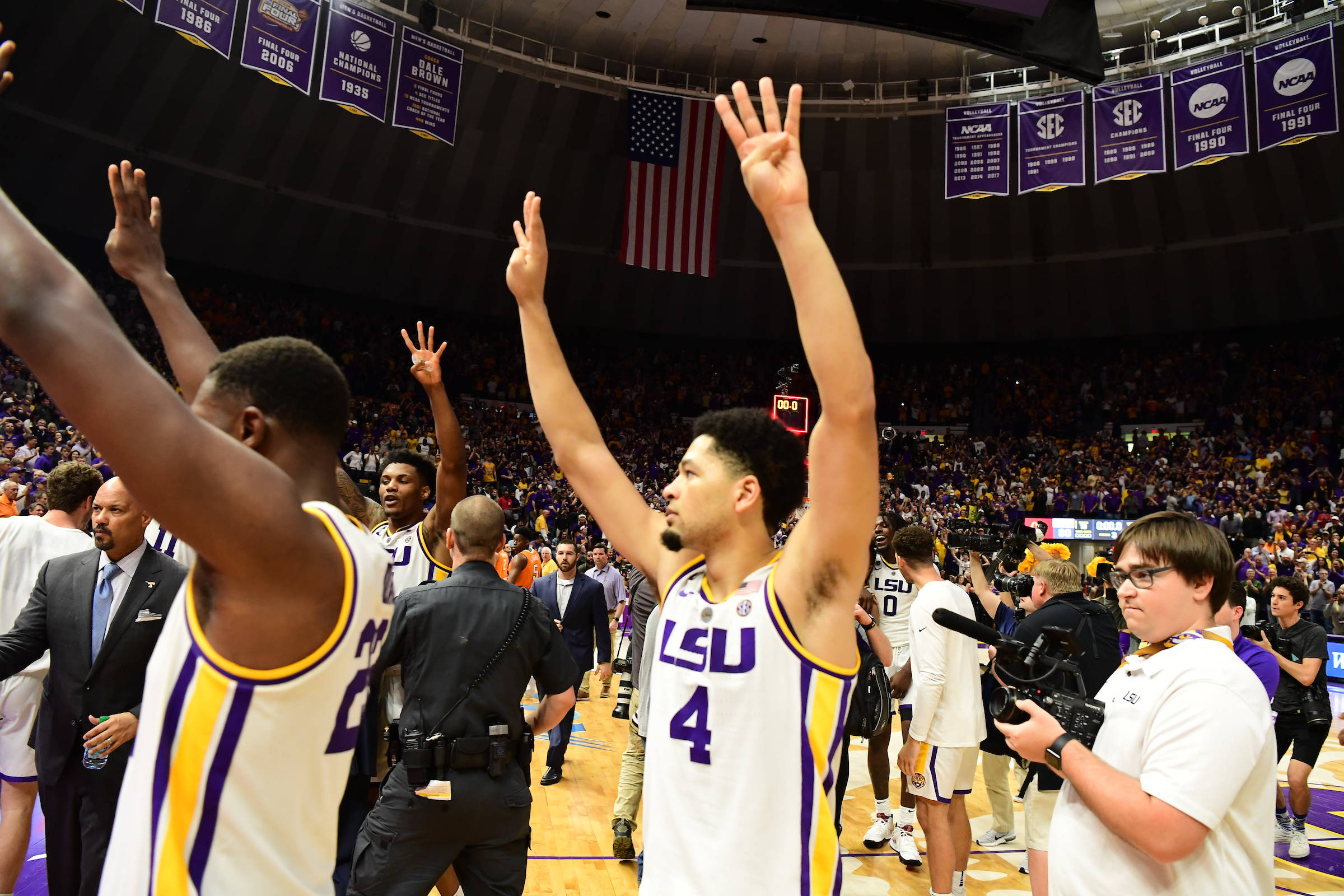 It’s the most important thing to Skylar Mays.

More important than scoring points, even after he dropped 23 with the SEC title hanging in the balance on Saturday against Tennessee.

More important than winning championships, which LSU is in the running for after knocking off Tennessee 82-80 in overtime, bringing the Vols and Tigers tied with Kentucky atop the conference at 12-2 with four games to play.

It’s so important that, as the final buzzer sounded on an unforgettable afternoon in the Pete Maravich Assembly Center – the sort of win they’ll talk about for decades and folks will lie about being in attendance for and Mays himself will think about for years to come – Mays did the thing that matters most to him immediately.

Four fingers. Each hand. Throw ’em up as high as possible. Let the world see.

They have five. But we have six. #Forever44 pic.twitter.com/4UD54xdyBP

This win, like the season it could define, was for Wayde Sims.

“For me personally, I just want to always make sure Wayde’s always remembered, him meaning so much to me and being my best friend,” said Mays. “So, in a moment like that, when we knew we had the cameras on us, I tried to make sure that I gave him a little of the shine.”

Sims, senselessly murdered before the season, was everywhere Saturday afternoon. He was on the patches worn by the Tigers. He was on the pregame video – They have five, but we have six. ­­He was in hashtags and on lapel pins.

Foremost, he was in the heart of his teammates.

That was easy to see, because on Saturday, the Tigers left their hearts on the floor. Mays led the charge in the first half. Fellow Baton Rouge native Javonte Smart took over in the second, scoring 29 points on the night, including, at one point in the final six minutes of regulation, 11 straight.

He also found Mays on the right wing for a game-tying three-pointer, after which Mays – normally reserved and stoic on the floor – let out a primitive yell, right there along with a sold out PMAC.

If it wasn’t the loudest moment of the day, then the foul that sent Smart to the free throw line with the score tied at 80 in overtime and just 0.6 seconds to play was the only one louder. After Kavell Bigby-Williams – who tallied his sixth double-double of SEC play – tipped in the game-tying bucket on the other end, Smart picked up a Lamonte Turner miss and crashed into Grant Williams.

After a timeout, he walked to the other end of the floor and calmly sank both free throws.

“Yesterday at practice we shot free throws,” said Smart, whose 29 points were a career high. “I didn’t miss a free throw in practice. So, I just said ‘practice makes perfect’ and I went up to the free-throw line with a lot of confidence.”

Not as much confidence as his head coach.

“There’s no doubt he was making those two free throws,” said Will Wade. “Those things were going in.”

Wade’s belief in Smart preceded those critical, game-winning efforts from the charity stripe. When the Tigers found out early Saturday morning they would be without star point guard Tremont Waters (illness), Wade knew Smart would be there to step in and fill in without missing a beat.

Smart did exactly that, not just with his 29 points – 20 of which came in the second half and overtime, a number that by itself would’ve been a new career high – but also with 5 rebounds, 5 assists, and countless clutch moments.

That man, @JavonteSmart, took over today to the tune of 29 points, including 11 straight at one point!#ykdavibe  pic.twitter.com/MgCyhD58N4

“That’s how he is. He’s so tough. I just love him. He’s everything we’re about as a program. He’s from Louisiana. He loves LSU and he loves it.”

The only thing Smart doesn’t love is talking about himself. He’s more than happy to talk trash to opponents, but in front of the microphone, he defers to his teammates.

“We miss Tre,” said Smart. “I can’t wait until he gets back. We just had to step up and make plays at the right time. I guess we did that.”

Where Smart defers, Mays is happy to step in and sing the praises of his freshman point guard. The two Baton Rouge natives have known each other for years.

If the rest of the country didn’t see this showing coming from Smart, Mays saw it coming from miles away.

“I’ve seen him grow up – not like I’m that much older than him,” Mays said of Smart. “I always knew he was a special player. I knew he was going to have a great game today, because he always shows up in the big time moments. I’m so proud, I’m so happy for him. He’s going to keep this upward trend going.”

Perhaps no one can speak to that upward trend like Mays. Two years ago, he, Sims, and former walk-on Marshall Graves – also a high school teammate of Sims’ who buried a 3 and finished plus-3 in seven critical minutes off the bench – played for a team that won just twice in 18 SEC games. (Note: Graves is playing under Sims’ scholarship this season.)

Two years later, they’ve lost just twice with four to play. They sit atop the conference heading into the home stretch. They’ve knocked off two top five foes in the same season for the just the second time in school history, and they’ve done it in the most difficult of circumstances.

The Tennessee win was yet another example of their resilience. Not only was Waters out, but Naz Reid scored just one point after missing most of the first half with foul trouble.

No problem. In stepped Darius Days, who scored 9 points and grabbed 5 rebounds, as well as Bigby-Williams and Emmitt Williams. This, even though ‘Plan B’ without Waters was to feed Reid in the post in heavy doses.

“We had to go to Plan C from there,” Wade joked.

“We overcame a lot of adversity. We had to pretty much flip our game plan in a night on things. We were able to do that, and our guys were really locked in and focused.”

Adversity? It’s shaped them. There are far tougher obstacles to overcome than a sick point guard or a top-five opponent or the pressure of a must-win, title-tilting contest.

The patch on Mays’ shirt, the fingers he throws upward, the legacy he honors – he’s not just remembering Wayde in this moment.

He’s sharing it with him.

“I feel like we are really a part of something special,” Mays said. “I feel like this year is starting to look like a turning point in LSU Basketball. Being a part of the downside of it and seeing the way this team is going, and the fact we have not even peaked yet is something I see as special.”