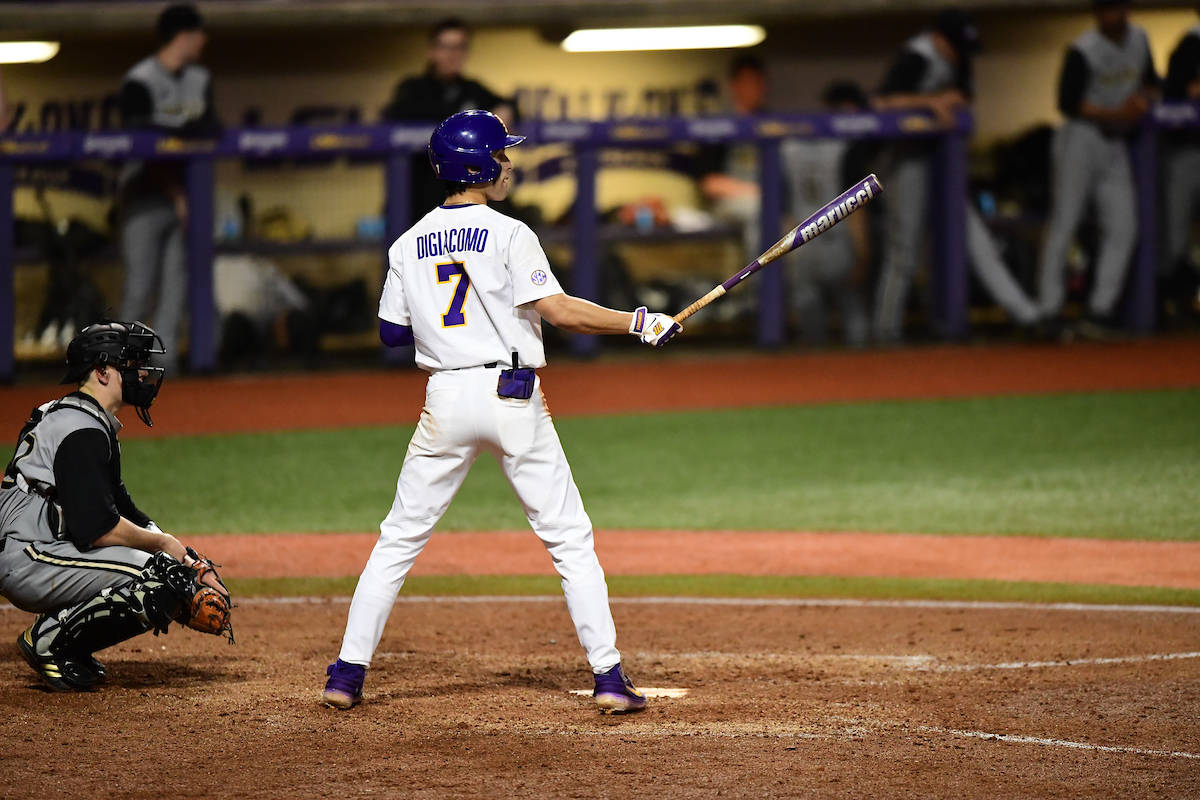 BATON ROUGE—Freshmen Cade Beloso and Giovanni DiGiacomo were inserted into the starting lineup Friday night and provided a spark for the Tiger offense after combining to hit 5-for-7 with three RBIs and scored five runs as the No. 1 LSU baseball team stormed past Bryant in Game 1 of the series, 13-6, in Alex Box Stadium, Skip Bertman Field.

With the win, LSU improves to 5-0 on the season while Bryant drops to 2-2.

The Tigers return to action Saturday at 7 p.m. CT for Game 2 against the Bulldogs at The Box. Saturday’s game will be available online only through the SEC Network+, which is accessible through Watch ESPN and the Watch ESPN app.

“Our hitters were so much better tonight than they were earlier this week against Southeastern. I challenged them yesterday at practice, and I think they responded to it. I was really proud of our team. I hate for the sloppiness to take away from a really good win because we had a good win against a really good ball club. To our credit, we took advantage of the errors they made and we were able to have some good at bats after that.”

Junior Zack Hess earned his first win of the season and improved to 1-0 after firing five innings. The right-hander gave up one run on four hits, walked two and struck out a season-best six batters.

Bryant starter Tyler Mattison suffered the loss and dropped to 1-1 on the season after allowing 10 runs—five earned—on 10 hits with two walks in 4.1 innings of work.

In the bottom of the second, with center fielder Zach Watson on first after being hit by a pitch, first baseman Cade Beloso dropped a single into left field to put runners on first and second with no outs. With the hit-and-run on, the Tigers moved to scoring position, and Watson touched home on the errant throw by the catcher. Third baseman Hal Hughes took the next pitch he saw and placed it into center field for a base hit to give the Tigers the 2-0 lead.

Designated hitter Giovanni DiGiacomo led off the bottom of the third inning with a walk and moved to second on a groundout. After left fielder Cabrera drew a walk and Watson reached on a fielder’s choice to load the bases, Beloso followed with his second hit of the night, an infield single, to drive in DiGiacomo. In the next at-bat, Hal Hughes grounded out to shortstop to bring home Cabrera and extend LSU’s lead to 4-0.

Bryant cut the LSU lead to 4-1 in the top of the fourth after catcher Sam Owens ripped a one-out double to left-center, driving in first baseman Chris Wright who reached earlier in the inning on a leadoff double and advanced to third on a fly ball to right field.

The Tigers struck back in the fourth with its third consecutive two-run inning. With two outs, DiGiacomo and right fielder Antoine Duplantis hit back-to-back singles to put runners on the corners. Cabrera singled to second base, and a throwing error by the second baseman brought home Cabrera. Duplantis scored to make it 6-1 on a wild pitch by Mattison.

In the bottom of the fifth with the bases loaded after Beloso led off the inning with a single up the middle and back-to-back errors loaded the bases with one out, shortstop Josh Smith doubled down the right field line, and Beloso and catcher Brock Mathis touched home. Smith and second baseman Brandt Broussard scored in the next at-bat when DiGiacomo slapped a single to left field to extend LSU’s lead to 10-1.

With the bases loaded and two outs in the top of the seventh after two walks and a hit batter, a wild pitch brought in shortstop Jimmy Titus. On the next play, Wright hit a two-RBI single to left-center to make it a 10-4 game.

To lead off the top of the eighth inning, Owens homered to left field. With the bases loaded and two away, Titus drew a walk to drive in second baseman Jake Gustin, cutting the LSU lead to four runs, 10-6.

In the bottom of the eighth with one out, DiGiacomo was hit by a pitch, and Duplantis slapped a single through the right side to put runners on the corners for Daniel Cabrera, who demolished a ball into the Diamond Deck in right field for a three-run home run, his third dinger of the year. LSU led Bryant 13-6 after eight innings.