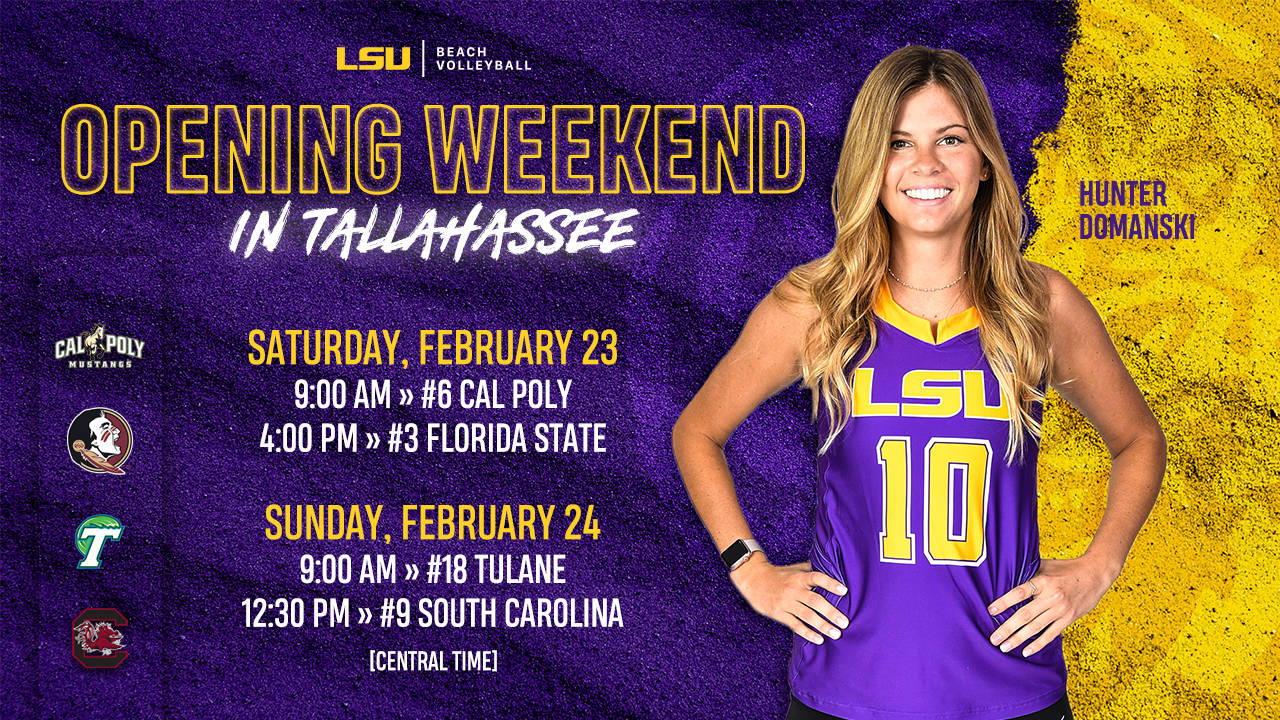 TALLAHASSEE – The No. 7 LSU Beach Volleyball team is set to open its season this weekend at the Home2 Suites Hilton-Tallahassee State Capitol Invitational against four teams in the AVCA Top-20 in No. 6 Cal Poly, No. 3 Florida State, No. 18 Tulane and No. 9 South Carolina.

“We come out every year and try to put ourselves in a position to get a real evaluation of where we are,” head coach Russell Brock said of always scheduling matches against top competition. “We want an honest evaluation and that’s the only way to get it. We know as the season progresses that we’re going to improve, but to know where you’re starting is really valuable and important.”

The Tigers are coming off back-to-back 27-win seasons in which they went the NCAA Championship as one of the final eight teams. LSU returns 12 players, six of which were major contributors on last year’s squad, and adds 11 new players who all have the ability to make an immediate impact.

“I think we’ve shown that we can play at a really high level with a lot of energy and focus,” said Brock. “We’re looking forward to being able to do that when it counts.”

LSU will open its season against Cal Poly for the second consecutive year. The Tigers handled business last year against the Mustangs, winning 3-2 to begin the 2018 season. With first serve slated for 9 a.m. CT, LSU will look to begin the 2019 campaign off with another victory at the FSU Sand Volleyball Courts.

Later on Saturday at 4 p.m., LSU will face the host, FSU. In their last matchup against FSU, the Tigers fell to the Seminoles in the CCSA Championship match, 3-0, last season. LSU will look to notch its first victory over FSU in program history this weekend.

Starting at 9 a.m. on Sunday, LSU will face in-state foe, Tulane. The Tigers swept the Green Wave, 5-0, in their final match against Tulane last season and have reeled off five straight victories against them after starting the series 0-4.

LSU will conclude the weekend at 12:30 on Sunday when it faces South Carolina. The Gamecocks had never beaten LSU before last season when they earned a victory at the Gamecock Grandslam. LSU finished the season series with two-straight wins, including a 3-1 victory in Gulf Shores at the NCAA Championship before being eliminated by the ultimate champion, UCLA.

“It’s been a long stretch of training and our players have done a great job maintaining focus, but you start to get that itch to play somebody else to see how good you are,” said Brock. “That’s exciting that we can get on the road and go and be in somebody’s house and try to replicate what we’ve been doing in training.”