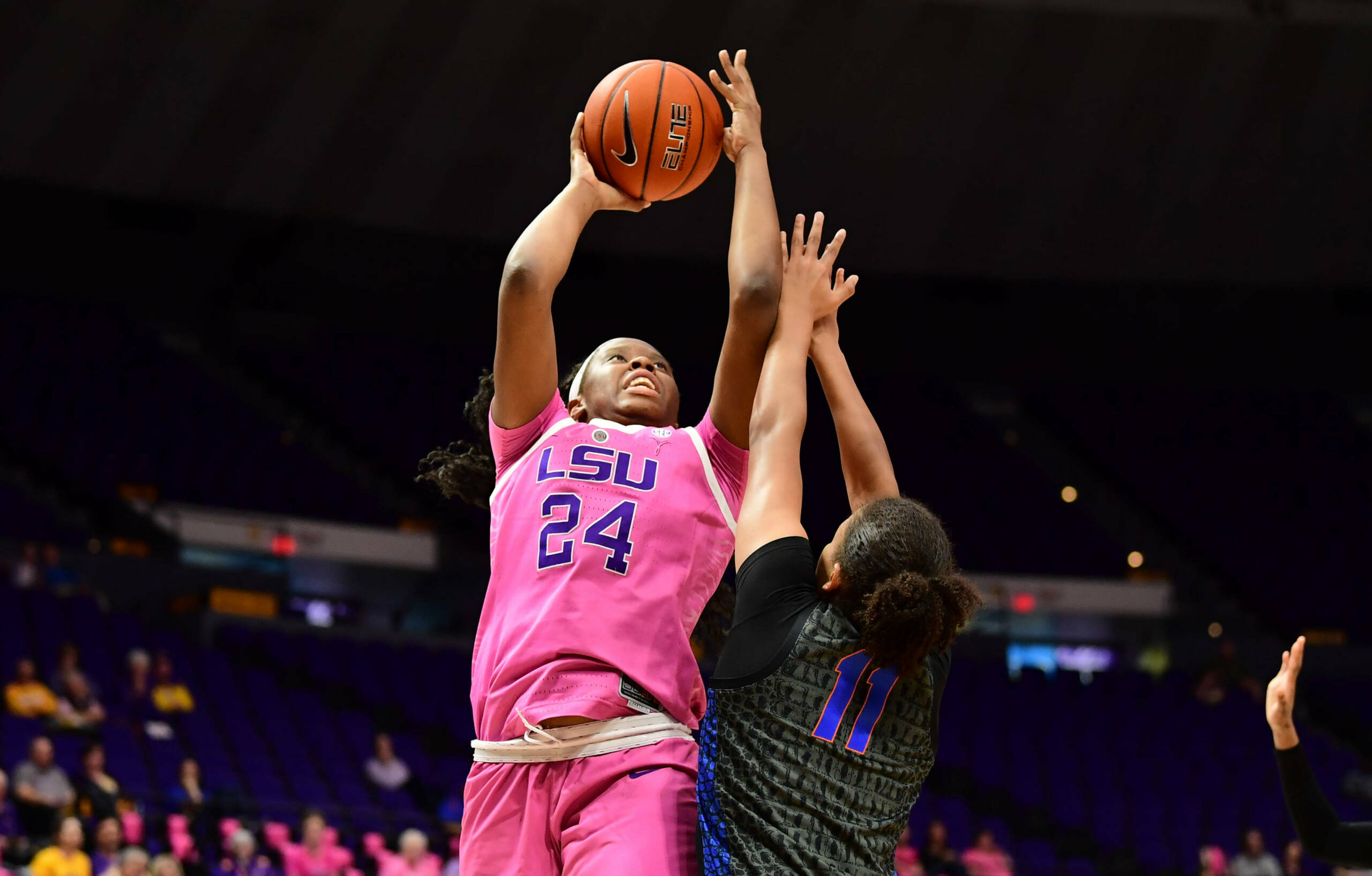 BATON ROUGE – LSU head coach Nikki Fargas has said that Ayana Mitchell and Faustine Aifuwa were a force to be reckoned with. On Thursday night, they were just that.

The LSU women’s basketball team cruised to a 69-51 victory against Florida on Thursday evening in the PMAC.

“They’re being patient,” Fargas said of Mitchell and Aifuwa. “I felt like with the looks that they were getting and the play action that we were calling, they were taking their time and they weren’t feeling rushed. They were scoring in a crowded area in the paint. Faustine Aifuwa and Ayana Mitchell have done a nice job of working and doing extra. We want them to be a dominant post presence.”

Aifuwa put up her third consecutive double-double with career highs of 20 points and 12 rebounds, while Mitchell finished the night with 22 points and eight rebounds.  It was the first time since February 25, 2018 that two LSU players scored 20 points in a game.

“When you have Aifuwa who is setting the tone for us, not only was she scoring the basketball, she was also grabbing rebounds,” Fargas said. “The confidence that she is gaining night in and night out is just going to continue. The play of this team is built on our defensive effort.”

The entire first half was a battle between the two teams as the largest lead from either side was a six-point advantage for LSU when it led 14-8 at the two-minute mark in the first quarter. At the close of the first quarter, Florida went on a 5-0 run to tie the score 16-16.

LSU’s offense really emerged in the third quarter as the Lady Tigers broke open a 9-0 run to pull ahead to a 46-34 lead.

Khayla Pointer scored six straight points to spark the run for LSU. She finished with 12 points and six assists.

“She’s someone we look to push tempo for us,” Fargas said. “She’s very elusive with her ability get in the paint and break defenders down. She’s somebody that we expect to score the basketball for us.”

After Florida’s Ariel Johnson hit a layup to disrupt LSU’s biggest run of the night, Aifuwa sunk back-to-back shots to give LSU a 50-36 lead and put the momentum back in the Lady Tigers’ hands.

The Lady Tigers defense didn’t let up in the final 10 minutes of the game as they held Florida to just 11 points in the final quarter. LSU’s offense didn’t hit the brakes either as Jaelyn Richard-Harris opened the fourth with a three-pointer at the top of the arc to extend LSU’s lead 54-40.

In the final seven minutes of the game, LSU outscored Florida 14-4.

“I really challenged them in the second half to come out with a little more intensity on the defensive side of the basketball,” Fargas said. “For us to lock down in the second half and only them to score 23 points in a half that was huge for us”

LSU forced 22 turnovers on Florida and scored 23 points off of those turnovers. On the other side, the Lady Tigers were able to take care of the basketball and only commit 11 turnovers.

The Lady Tigers were also successful on the boards against Florida, out-rebounding the Gators 40-29.

Next up, LSU will go on the road to face nationally ranked Kentucky in Memorial Coliseum on Sunday, February 24 with tip-off set for 1 p.m. CT.