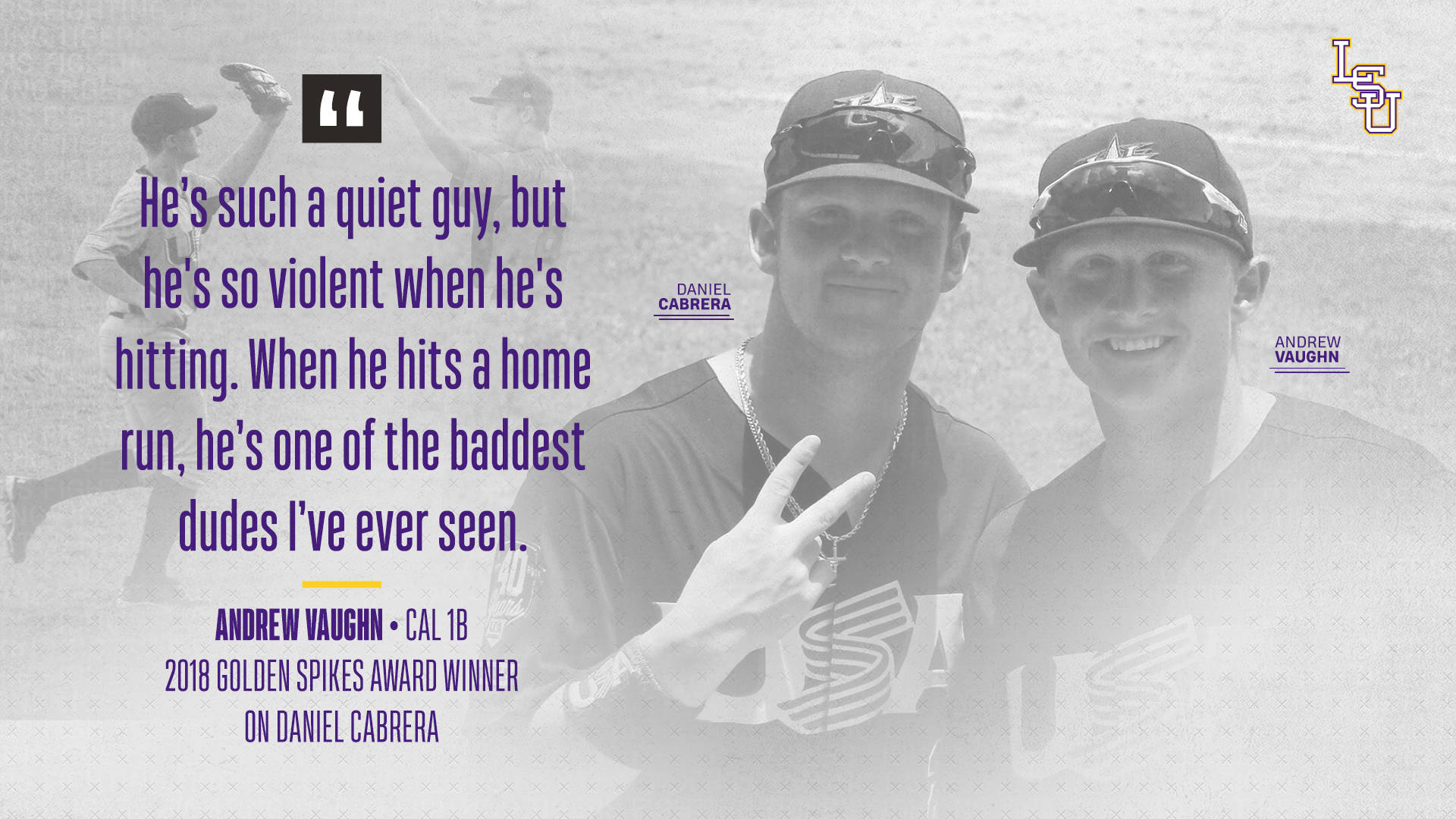 Turning down the offer to play professional baseball, Cabrera cemented his decision to attend LSU and immediately made a splash in the fall of 2017.

His impact in the fall, especially his offensive prowess, carried over into spring practice so much so that LSU baseball head coach Paul Mainieri named Cabrera the starting left fielder for the Tigers.

On opening night, Cabrera showed discipline at the plate, drawing two walks, but the freshman went 0-for-2. Cabrera was 0-for-9 moving into the midweek contest against New Orleans.

Finally, after being 0-for-11, the Louisiana native collected his first hit and then his second.

He still had it in him. It just took longer than he wanted.

On April 15, 2018, with the Tigers trailing Tennessee 7-3 in the bottom of the ninth inning, LSU had pulled the game within one run. It was a 7-6 ball game with Cabrera at the plate and runners in scoring position.

Cabrera watched the first offering from Tennessee right-hander Andrew Schultz pass him by. He had his timing down, and on the next pitch, Cabrera went yard. The three-run blast to right field lifted the Tigers past Tennessee for the series sweep.

“I blacked out,” Cabrera said.

However, the Tiger fans watching saw a side of Cabrera that they were not all that familiar with. The freshman flipped his bat and had an aggressive aura around him running the bases, which was quite different than the quiet and otherwise straight-faced, composed outfielder.

Cabrera finished the season batting .315 with 18 doubles, two triples, eight homers, 54 RBI and 38 runs. He recorded LSU’s second-longest hit streak of the season with a 12-game streak from May 9 through May 25.

After the conclusion of the season, the 2018 Freshman All-SEC selection and Freshman All-American was headed to Bourne, Mass., to play in the prestigious Cape Cod Baseball League, but when LSU teammate Antoine Duplantis had his summer on Team USA cut short due to an injury, Collegiate National Team head coach Paul Mainieri immediately knew who he was calling as a replacement.

Cabrera left the Cape to join the national team and was inserted in the starting lineup as the cleanup guy between All-American Oregon State catcher Adley Rutschman and Golden Spikes Award winner first baseman Andrew Vaughn.

Cabrera held his own, batting .300 in 14 games with one double and a team-best two homers and six RBI.

In Havana, Cuba, Cabrera and Vaughn hit back-to-back solo homers to propel the Red, White and Blue to a 2-0 victory, which was easily the highlight of the summer for each of them.

Throughout the summer, Cabrera would talk Vaughn to learn more about his approach and how the consensus All-American who batted .402 in 2018 for Cal handled himself at the plate with the pressure.

“I would just constantly ask him about his approach and his swing,” Cabrera explained. “I don’t really do anything that he does, but I enjoy learning more about the game and what he does when he plays.

Vaughn reciprocated the brain-picking, eager to learn more from Cabrera.

The friendship between the two all started in an airport in 2013.

Cabrera and his family were catching flights back home after spending time with the USA Baseball 15U National Team.

Vaughn was in the airport as well, waiting to head back to Santa Rosa, Calif., but when his flight was delayed until the next day Cabrera’s mother, Nancy, stayed with Vaughn to make sure that he would make it home safely the next day.

At the time, Cabrera was being highly recruited as a pitcher. He had thrown 13.2 innings and had a 1.98 ERA with 13 strikeouts, good for second-most on the team, a team that featured LSU pitcher Todd Peterson.

Cabrera was not into pitching, though. All he wanted to do was hit, be in the cages, and become aggressive Daniel with the bat in his hand.

Calm, cool and collected always, until he steps in the batter’s box. Then, he’s in the zone.

Cabrera was eager to start his sophomore campaign on a better foot than his freshman year so much so that he got “The Box” rocking with two home runs in last Friday’s season opener versus ULM. Once he got the first hit out of the way, he was able to zone in, settle down and play his game the only way he knows how to.

“He’s just Daniel,” Vaughn said. “But when he’s on the baseball field, he’s a bad dude.”