Tigers Fall to Gators in Overtime, 82-77 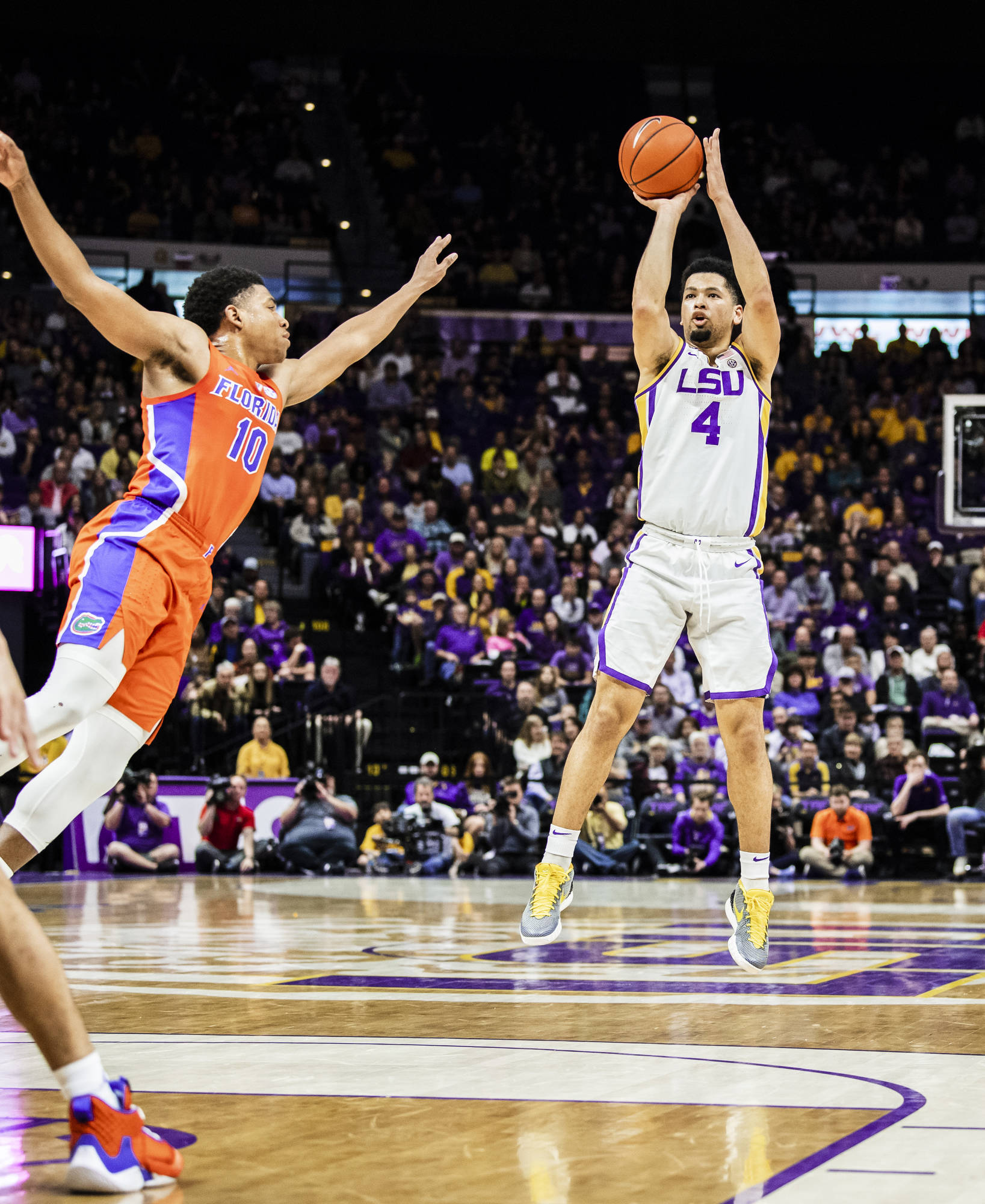 BATON ROUGE – The LSU Tigers allowed the Florida Gators to control the tempo and style of play and Florida helped its post-season chances with an 82-77 overtime win Wednesday night in the Pete Maravich Assembly Center.

The Tigers, ranked 13th in the AP Poll, dropped its second home game of the season and fell to 21-5 overall and 11-2 in the Southeastern Conference. The Tigers are back in a tie for second in the SEC with Kentucky. Tennessee, Saturday’s opponent in Baton Rouge, is one game up at 12-1.

LSU had all five starters finish in double figures, but the Tigers did not have a great night from the field, hitting 27-of-63 shots for 42.9 percent with seven treys. The surprising part was LSU’s inability to capitalize at the free throw line, making just 16-of-25 for 64 percent. It was the worst game of the year as far as percentage in conference play.

Skylar Mays had 18 points, hitting 6-of-12 from the field with two treys and 4-of-4 at the line. Naz Reid had 16 points and 15 rebounds (13 points in the second half) while Kavell Bigby-Williams, Tremont Waters and Marlon Taylor each had 10.

Florida was led by Kevaughn Allen who had 21 points with five treys, while Noah Locke and Jalen Hudson each had three treys and 15 points and Kevarrius Hays added 10. Florida shot 46.2 percent (30-of-65) with 11 treys and 11-of-13 at the line.

LSU out rebounded Florida, 38-36, and 18-15 on the offensive boards, but with both teams making 14 turnovers, the Gators took better advantage getting 21 points off turnovers to just seven by LSU.

There were 13 ties and nine lead changes in the contest in which LSU only led for a combined 6:23.

Trailing at the half by two, 33-31, after being down by as much as eight in the first half, LSU was able to take its biggest lead of the game for the first time after a three-point play by Mays gave LSU a 53-52 advantage with seven minutes to play.

After both teams missed threes, Florida then LSU, Reid got the offensive board and put it back to put LSU up 55-52 with 6:27 to go. But after back-to-back turnovers by the two teams, Allen came down and hit a trey to tie the game at 57-57.

A Reid three-pointer off a pass by Emmitt Williams put LSU up again by three at 60-57 with 3:21 to play but Florida would score five straight to go up 62-60 with 1:57 to play on another Allen three.

Reid was fouled of an offensive rebound of a Mays miss and hit two free throws to tie it at 62-62 with 1:20 left. Johnson would get a layup on the other end with 51 seconds left to put Florida up 64-62.

LSU got a shot by Reid, but he got his own miss and tied the game with 35 seconds left. Florida turned the ball over on a shot clock violation with 5.7 seconds to play but Waters missed a long three-pointer before the buzzer, sending the Tigers to a school record tying fifth overtime game this season.

But the Gators continued to be strong in the overtime, taking the lead for good on a three-pointer by Allen, 73-70, with 2:05 left. LSU turned the ball over and Locke missed a three but got his own rebound and found Allen for another trey and a 76-70 advantage with 1:12 to go in overtime.

LSU took timeout and went to a full court trap, getting a turnover as Javonte Smart came up with the steal. Waters missed a quick three and Florida added two free throws in the final 10 seconds for the final margin.

The Tigers host Tennessee on Saturday at 11 a.m. in the sold-out Maravich Center in a game televised by ESPN and broadcast on the LSU Sports Radio Network.

Opening statement…
“We could just never get in rhythm tonight. The was played at Florida’s pace and their way. We could never get ourselves gong and Florida was able to impose their will and their style of play on us. KeVaughn Allen was phenomenal for them. Obviously hit some big shots in the second half. I thought they really hurt us on the offensive glass in the second half. That was something that came back to bite us. We didn’t finish well enough at the rim; we didn’t shoot free-throws like we normally shoot free throws. We weren’t very crisp tonight. We weren’t as crisp as we needed to be with our execution.”

On what Florida was able to do…
“I thought they beat us to a lot of 50-50 balls. I thought they were more physical. I told our guys all week that Florida was going to give us unbelievable resistance defensively and I don’t think some of our guys believed us. I think some of our guys just thought we would show up and do what we do, but that wasn’t the case.”

On feelings during pregame warm ups and shoot around…
“It was not the level of desperation we needed. They came out more desperate and you could tell in the first few minutes of the game that it was going to be a street fight. Credit to them, they just played harder than us. They got all the 50/50 balls. When things go like that, it is hard to win that way.”

On the physicality of Florida…
“They are a very physical team. That is probably the most physical team we have faced, I do not want to say this year, but in a while. They definitely woke us up. We have to get back to the drawing board and get to work and prepare for Saturday.”

On struggle from the free throw line tonight…
“I would say that is not like us, but obviously we have to shoot better from the free throw line. I do not think that was the only deciding factor in the game. Just going back to how they played harder than us. They got a lot of extra possessions and offensive rebounds. Obviously, missing free throws does not help, but it was a big part of it.”

On using a game like tonight to get better…
“We made a lot of mistakes today. Obviously, we have to go through the process of film and see what we can do better. At the end of the day, we are not getting this game back so we cannot let this game beat us twice. We have done that in the past before, but I think we have matured past that point. We are just going to come out and play a lot harder on Saturday.”

On getting hit in the mouth…
“I just wanted to keep playing. You get nicks and bruises in basketball.”

On physicality of Florida…
“They are a really tough team. I cannot say much besides the fact they clearly wanted it more than us.”

On Tremont Water’s shot on the last possession…
“Just go up and get the ball and fight for box outs. We obviously did not hit and did not get the rebound, so we did not fight hard enough.”

On if he emphasized LSU’s intensity to his team…
“Oh, absolutely. They are as good on the interior as most teams in the country. I know their numbers don’t say it, but I think that they’re as tough to block out and to keep off the offensive glass as anybody in college basketball. There are a lot of reasons: their length, their size, and their depth with that size. I think Will (Wade) is able to keep some guys fresh and put a number of guys in there that can attack the offensive glass. They’ve got big athletic wings that can complement all their 4’s and 5’s. A lot of times their guards draw so much attention with the ball screens, especially Tremont Waters. He is one of the hardest guys in the country to defend. And a lot of times your guards get in your rotational block out with those bigs. It’s crazy to say because I thought we did a great job on the defensive glass, and we still got 18 offensive rebounds. We scrapped and played really hard, which is what our guys do. We continued to battle, you know we’re undersized, continued to play really hard. We held our own.”

On what mentality he saw from his team during the game…
“I thought they played really hard. I don’t want to contradict anything that Will, will say, but I thought both teams played really hard. They got a bunch of 50-50 balls that our staffs were curious about and vice versa. I thought it was a high-level game with a lot ups and downs for both teams. We had a couple of opportunities there to make it just a little bit simpler and put them away. We hit some big shots. They are terrific on the glass on both ends, which shows the level of intensity and physicality. The energy level, the aggressiveness level that they played with defensively, kind of makes you left handed at times. They are in passing lanes, they put a lot of pressure on the ball, and they play really hard.”