Men's Golf Knocks Off No. 1, Wins 'The Prestige'

by Aaron Hyder
The Prestige - Results +0 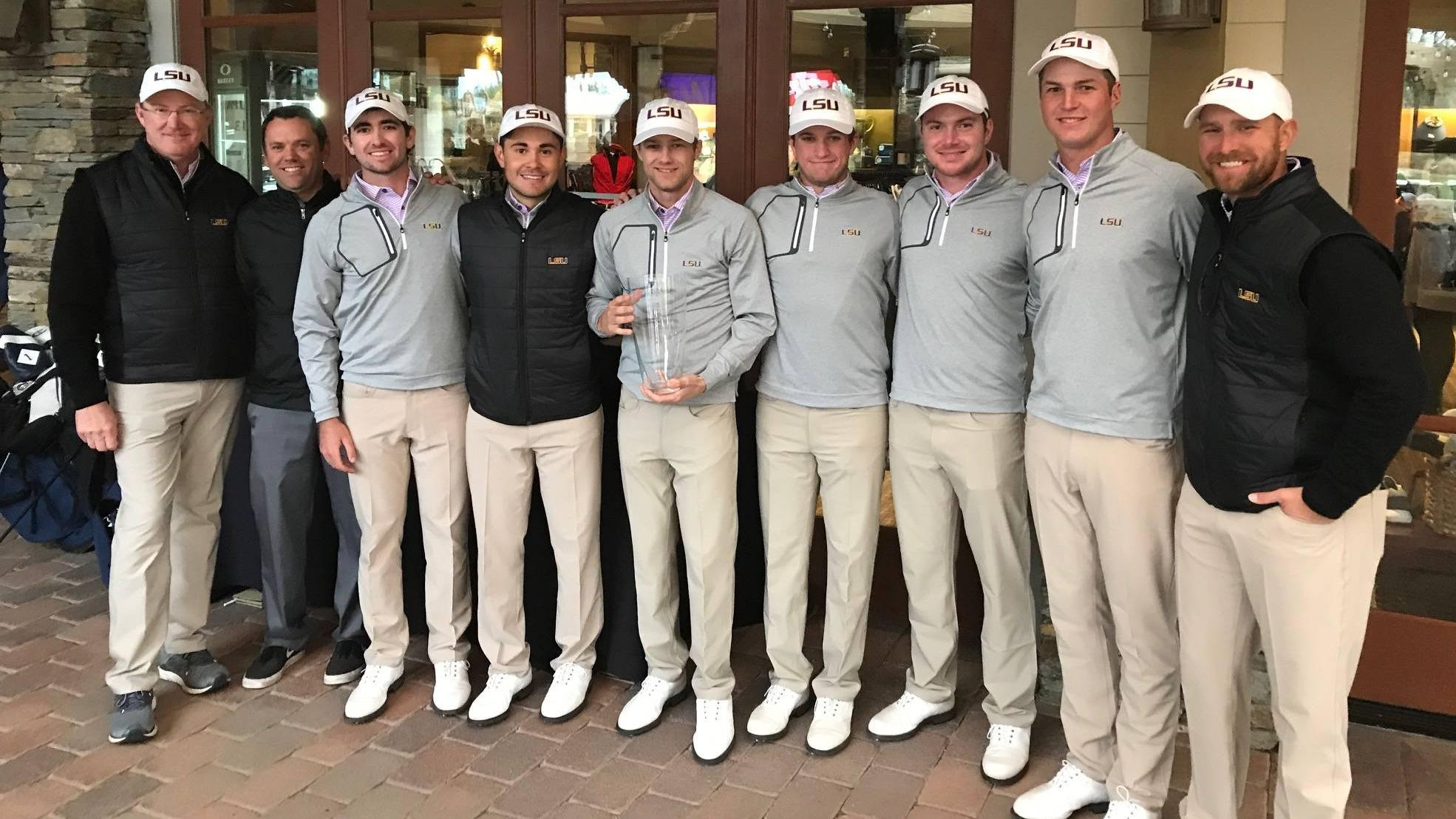 La Quinta, Calif. – The 16th-ranked LSU men’s golf team picked up three top-25 wins at The Prestige on Wednesday afternoon including a victory over the unbeaten No. 1 Oklahoma State Cowboys. The Tigers won the tournament by six strokes over Oklahoma State with a three-round total of 14-under 838 (279-280-279).

Entering the day three strokes ahead of the top-ranked Cowboys at the Greg Norman Course at PGA West, the Tigers got off to a bit of a slow start on their front nine. Only one player, Philip Barbaree, was under par as the upset-minded Tigers made the turn. Falling as many as five strokes behind early in the round, LSU sharpened its play up and started throwing absolute darts at the flags in the latter half of the round. Of the 45 holes played on the back nine by the Tigers, eight were birdies, 35 were pars, and only two were bogeys, and that’s the kind of play that propelled the Purple and Gold to the title.

“To win team events, it takes a true team effort, and that’s what we got out of our guys this week,” director of LSU golf, Chuck Winstead, said. “We showed some resiliency today and I love seeing that out of my guys. We played some really quality golf on the back nine today, and of course, we were led by Philip (Barbaree), who played lights out today.

“I’m proud of how we played this week and this is a great start to the spring portion of our season.”

Barbaree fired a final round 5-under 66, the best of his collegiate career, to star in the victory. The 66 was fueled by an amazing three-hole stretch on numbers 7-9 in which he went birdie-eagle-eagle. The birdie came just two holes after one of his only mistakes on the day, a double on the fifth hole. Following the birdie on seven, Barbaree found himself on the backside fringe of the par 5, eighth hole. He played a perfect pitch and landed it about 10 yards short of the pin and it’s line was money all the way into the cup. Not done yet, the junior from Shreveport found himself in the fairway on the par four, ninth. With 92 yards between him and the cup, the righty holed out for back-to-back eagles to move his score to 3-under for the round. He traversed the back nine wondrously with birdies on No. 12 and No. 17 to go along with seven pars to put the finishing touches on the best collegiate round of his career. His final round 66 moved him up six spots in the individual standings into a tie for third at 5-under 208 (73-69-66) – the best finish of his collegiate career. He finished the tournament with three eagles to make him the only player in the field with multiple eagles.

Back to back eagles by @PBarbaree_PGA on holes No. 8 and No. 9 at The Prestige at PGA West!

His final round charge (5-under 66) helped @LSUMensGolf knock off No. 1 Oklahoma State and claim the team title.#SCtop10 #GeauxTigers

The other three scorers on the day for the Tigers were Luis Gagne, Garrett Barber and Trey Winstead – all three of those guys carded even par 71s. Gagne had the best overall finish of those three with a tie for sixth at 2-under 211 (71-69-71). His final round was a rollercoaster on the front nine that included three birdies, three pars, two bogeys and a double. He steadied up for the final nine and rolled in a birdie on the par four, 11th hole. Gagne’s highlight of the final round was a chip in for birdie on No. 14, and he even made a par save with his ball halfway submerged in the water on No. 16. The tie for sixth was Gagne’s best finish of the season.

Winstead carded his final round 71 even though at one point he was at 3-over in the round. After three straight bogeys on holes 5-7, the lefty rebounded and birdied three of the next five holes to get back to even and he closed out the round with six pars on the way to the clubhouse for tie for 11th place at 1-over 214 (71-72-71). Barber had the steadiest hand of anyone today with 14 pars, two birdies and two bogeys. The freshman from Stuart, Fla., finished tied for 14th at 2-over par 215 (68-76-71)

Senior Nathan Jeansonne picked up the sixth top-10 finish of his career with a final tally 1-under 212 (69-70-73); his final positioning of tied for eighth place was the best of his senior year. Chris Woollam finished the tournament as an individual tied for 63rd at 16-over 229 (78-74-77).

The Tigers will be back in action at the Querencia Cabo Collegiate on March 3-5 in Cabo San Lucas, Mexico.