Men's Golf in Lead After 36 Holes at The Prestige 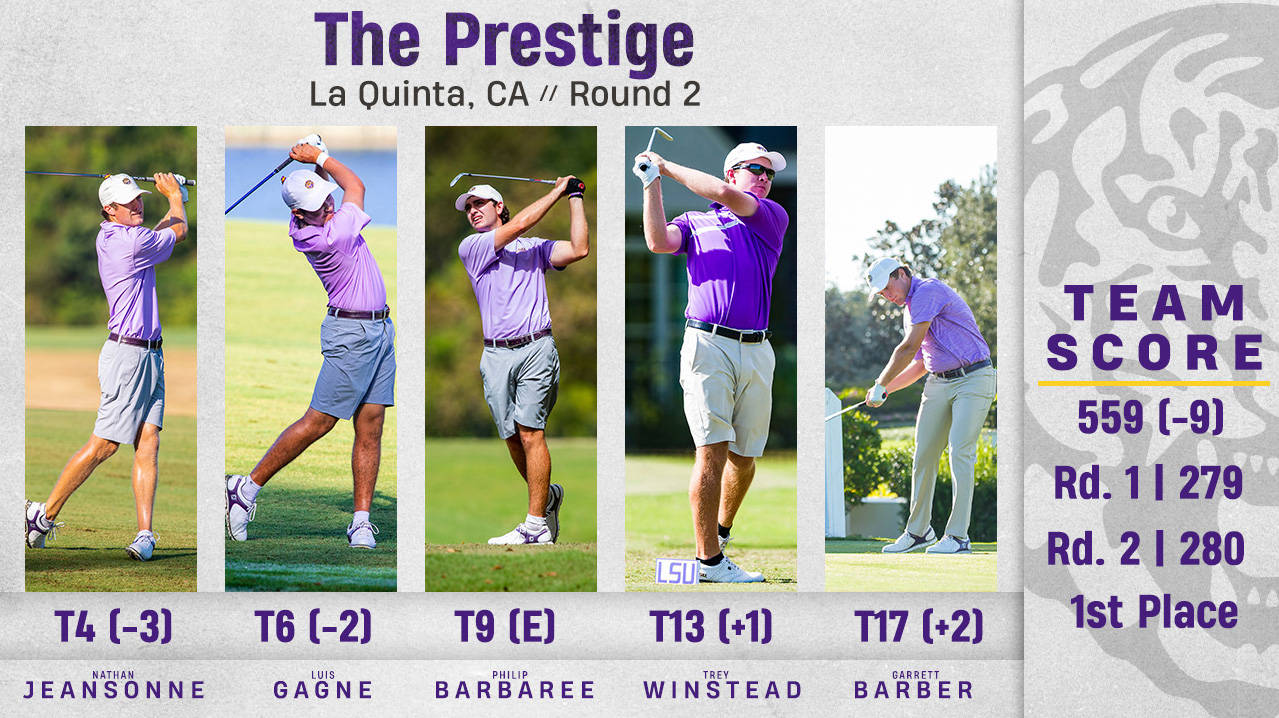 La Quinta, Calif. – Low team round of the day. Five guys in the top 20. That’s a recipe for success, and with that the 16th-ranked LSU men’s golf team sits alone at the top of the leaderboard with a five-stroke lead over No. 1 Oklahoma State at The Prestige at PGA West.

A trio of upperclassmen led the charge for the Purple and Gold on Tuesday afternoon at PGA West with senior Luis Gagne and junior Philip Barbaree carding 2-under 69s, and senior Nathan Jeansonne turned in a card of 1-under 70. Trey Winstead‘s score of 1-over 72 also counted towards the team score.

Jeansonne holds the highest standing of any of the Tigers in the field with a two-round total of 3-under 139 (69-70) through 36 holes to sit in a tie for fourth place. Jeansonne’s second round was highlighted five birdies, four of which came in a five-hole span from Nos. 8-12.

Gagne used the second-best round of his senior season, a 2-under 69, on Tuesday. After bogeying the third hole, Gagne final 15 holes perfectly with three birdies and 12 pars to close out his round; he is in a tie for sixth place. Barbaree rebounded from his tough day one and only had to use 69 strokes for his second round of the tournament. He went out in 36 strokes (1-over) on the front nine and he even bogeyed No. 10 to push his round total to 2-over par, but that was the end of giving away strokes to the field. He proceeded to eagle 337-yard par 4 11th by driving the green and rolling in a put. Pair that with a birdie on the par 5 12th hole and his round was back to 1-under. He carded his last birdie of the day on the No. 16 to move to 2-under for the day. The eagle on No. 11 was the third of the season for Barbaree, a category in which he leads the squad.

Winstead’s round featured four birdies, 10 pars, three bogeys and a double bogey for his 1-over 72; he is in a tie for 13th. Garrett Barber shot a 5-over 76 on day two, but he still sits in a tie for 17th. Chris Woollam, who is playing as an individual, is tied for 56th in the tournament after shooting a second round tally of 3-over 74.

The final round of The Prestige will start for the Tigers at 11:20 a.m. CT. Garrett Barber will go off No. 1 at 11:20 a.m. CT and he will be followed by Trey Winstead, Philip Barbaree, Luis Gagne and Nathan Jeansonne in 11-minute increments. The final will be streamed on Golfweek.com.