LSU Welcomes SLU to 'The Box' at 4 p.m. Tuesday 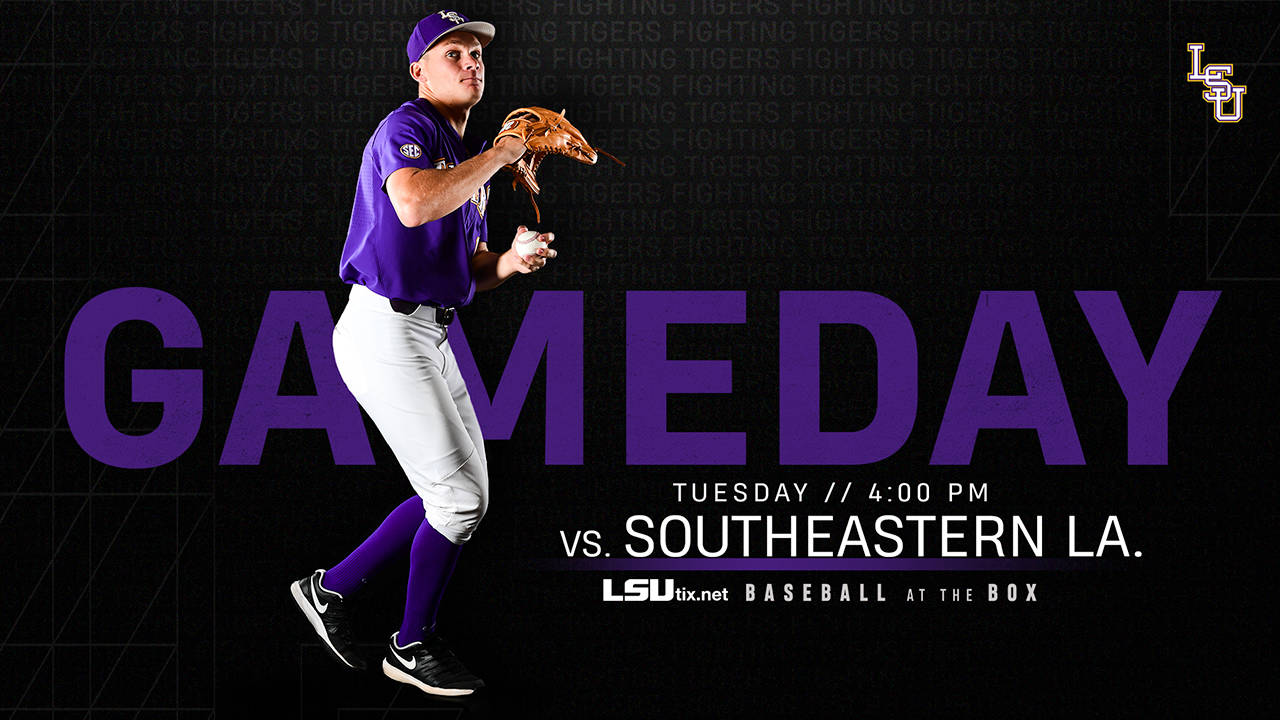 SERIES RECORD VS. SOUTHEASTERN LOUISIANA
LSU leads Southeastern Louisiana, 70-18, in a series that began in 1937, and the Tigers have won 24 of the last 26 meetings between the schools. The teams split two games last season – SLU posted a 5-4 win in Hammond before the Tigers defeated the Lions, 4-2, in Baton Rouge. LSU has a 43-4 mark against Southeastern Louisiana since 1990.

QUOTING PAUL MAINIERI
“I thought the opening weekend showed a lot of different facets of our team, and I was pleased with the way our players competed. Everything was very positive, but we have a lot of games ahead. Southeastern has an excellent program with a lot of very talented ball players, and they’re going to present a tremendous challenge. We did what we needed to do over the first weekend, but we’re a long way from accomplishing anything. We have to continue to make progress, beginning on Tuesday against an outstanding Southeastern club.”

ABOUT THE TIGERS
• Top-ranked LSU opened the 2019 season last weekend with three straight victories over Louisiana-Monroe, Army and Air Force … the games drew a total attendance figure of 35,463, which was the largest three-game total for a season-opening weekend in the history of Alex Box Stadium, Skip Bertman Field
• Senior outfielder Antoine Duplantis led LSU in the season-opening weekend by batting .385 (5-for-13) with one double, two homers, 10 RBI and four runs scored … in Friday’s 12-7 win over Louisiana-Monroe, Duplantis blasted a two-run homer in the seventh inning to break a 5-5 tie, and after ULM knotted the game 7-7 in the top of the eighth, he launched a grand slam in the bottom of the inning to highlight a five-run outburst … the grand slam was the second of Duplantis’ career; the first came on April 22, 2016, versus Mississippi State … in the Tigers’ 17-5 win over Air Force on Sunday, Duplantis was 3-for-3 at the plate with a double, three RBI and two runs scored … Duplantis now has 273 career hits, 79 shy of matching former LSU first baseman Eddy Furniss (1995-98) as the all-time SEC hits leader with 352.
• Junior shortstop Josh Smith got off to a torrid start over the weekend, batting .667 (8-for-12) with two doubles, two RBI and six runs scored … sophomore leftfielder Daniel Cabrera batted .500 (5-for-10) in three games with two homers, six RBI and four runs scored … in Friday’s win over ULM, Cabrera launched two homers, marking the first multi-HR game of his career … Cabrera also produced a career-high five RBI in Friday’s contest.
• The Tigers hit .349 (47-for-106) as a team over the weekend with nine doubles, six homers and 35 runs scored … all nine doubles came in the Tigers’ 17-5 win over Air Force on Sunday, just one double shy of the school record of 10 set on March 22, 1998, versus Arkansas.
• Among the hitting highlights over the weekend was a three-run, walk-off home run by freshman first baseman Cade Beloso on Saturday versus Army … LSU entered the ninth inning trailing 5-3, but the first two Tiger hitters drew walks and Beloso launched the first pitch he saw into the right-field bleachers to give LSU the victory … the walk-off HR was LSU’s first since April 15, 2018, when Daniel Cabrera accomplished the feat versus Tennessee.

ABOUT THE LIONS
• SLU was swept in three games by Louisiana Tech to open the 2019 season, allowing 40 runs on 43 hits in 27 innings.
• The Lions were led at the plate versus Louisiana Tech by senior outfielder Nathan Pilutti, who batted .636 (7-for-11) with one homer, three RBI and four runs scored … sophomore utility player Preston Faulkner hit .400 (6-for-15) with two doubles, six RBI and five runs.
• Southeastern senior infielder Kyle Schimpf, the younger brother of former LSU infielder Ryan Schimpf (2007-09), collected two doubles and five RBI in the Louisiana Tech series … Ryan Schimpf helped lead LSU to the 2009 College World Series title, and he played in the MLB with the San Diego Padres and Los Angeles Angels.