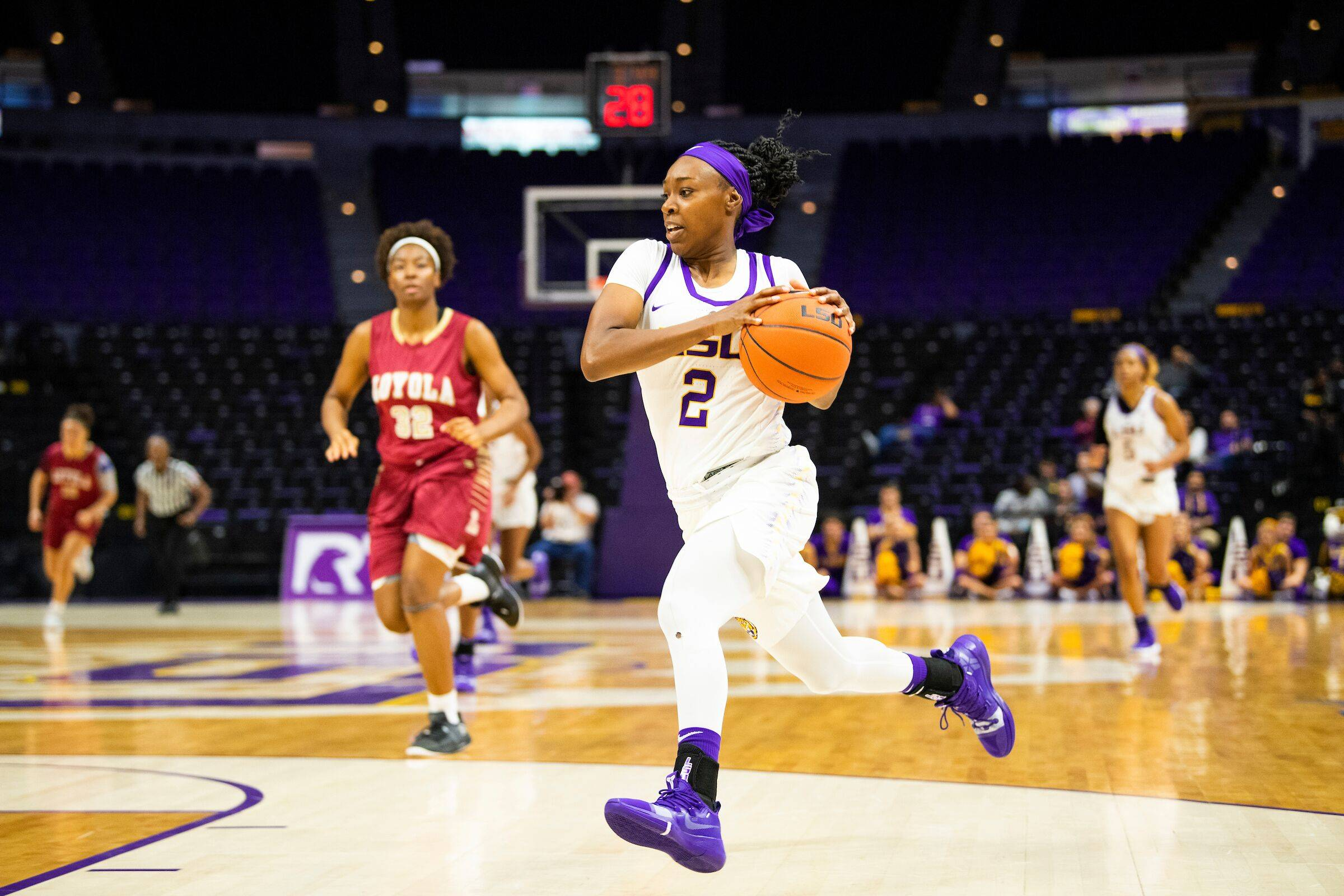 NASHVILLE – The LSU women’s basketball team defeated the Vanderbilt Commodores, 79-68, on Sunday evening at Memorial Gymnasium behind a career night of 21 points from senior Shanice Norton and sophomore Faustine Aifuwa‘s third double-double of her career.

The Lady Tigers struggled early against the Commodores in the scoring category as Vanderbilt held a six-point advantage at the four-minute mark and led by three at the end of the first quarter, 15-12.

But the Lady Tigers showcased their top-ranked scoring defense in the SEC during the second quarter, forcing nine consecutive turnovers by Vanderbilt. Meanwhile, the LSU offense kicked into gear and went on an 18-0 run to take the lead. LSU took a 38-29 lead into halftime after shooting 12 of 13 from the field in the second quarter.

LSU was without Ayana Mitchell in the first half as she left 30 seconds into the game with an ankle injury. She returned in the second half and immediately got to work. Mitchell finished with eight points and five rebounds.

Without Mitchell, LSU looked to its bench for support which scored 16 points with Karli Seay leading the way. She had seven points on the night.

“I thought our fight was definitely there especially when Mitchell went down at the very beginning of the game,” Fargas said. “This group is resilient. The play off the bench of LaToya Ashman and Karli Seay really was a difference maker. We had to go to them in the early part of our game.”

LSU forced a total 24 turnovers on Vanderbilt and scored 24 points off of those turnovers.

“We were able to change the tempo of the game with our defensive pressure,” Fargas said.

Norton scored 10 of her career-high 21 points in the first half and was all over the floor on the defensive side of the ball making stops for the Lady Tigers with three steals.

“Her hard work is paying off for her,” Fargas said of Norton.

Fargas put an emphasis on guarding Vanderbilt’s Mariella Fasoula who gave LSU trouble early on and finished with 24 points for the Commodores.

“She’s very efficient with her scoring around the basket,” Fargas said of Fasoula. “I thought our ability to disrupt the ball before it got to her was key for us.”

At the half, LSU held a nine-point lead. Vanderbilt came out of the break and quickly cut LSU’s lead to four behind three free throws and a layup before the Lady Tigers were able to score again.

It was Aifuwa who was able to get in the paint and put LSU back up by six before the Commodores answered with a three-pointer.

Aifuwa notched the third double-double of her career in back-to-back games with 15 points and 11 rebounds for LSU.

In the third quarter, LSU and Vanderbilt traded field goals and the Commodores were able to pull within four points late in the quarter. The Lady Tigers were able to pull away behind layups from Pointer and Mitchell to hold a seven-point lead before the final 10 minutes of the game, 58-51.

The Lady Tigers held a 10-point advantage with 7:08 remaining in the game, 66-56, but it wasn’t until the final two minutes of the game that LSU was able to pull away. LSU was perfect from the free throw line down the stretch to put away Vanderbilt.

“The way we played tonight especially with the adversity that our team was hit with, I’m very pleased with how we played and supported each other even in the midst of Mitchell being out in the first half,” Fargas said. “It’s what you want to see out of your group.”

It was LSU’s first win at Memorial Gymnasium since January 23, 2005, snapping a 7-game road losing streak against Vanderbilt. With the win, LSU improves to 15-9 overall and 6-6 in league play. Vanderbilt falls to 6-19 and 1-11 in the SEC.

LSU will return home to host Florida in the PMAC on Thursday, February 21 for the annual Play4Kay game with tip-off set for 6:30 p.m. CT.