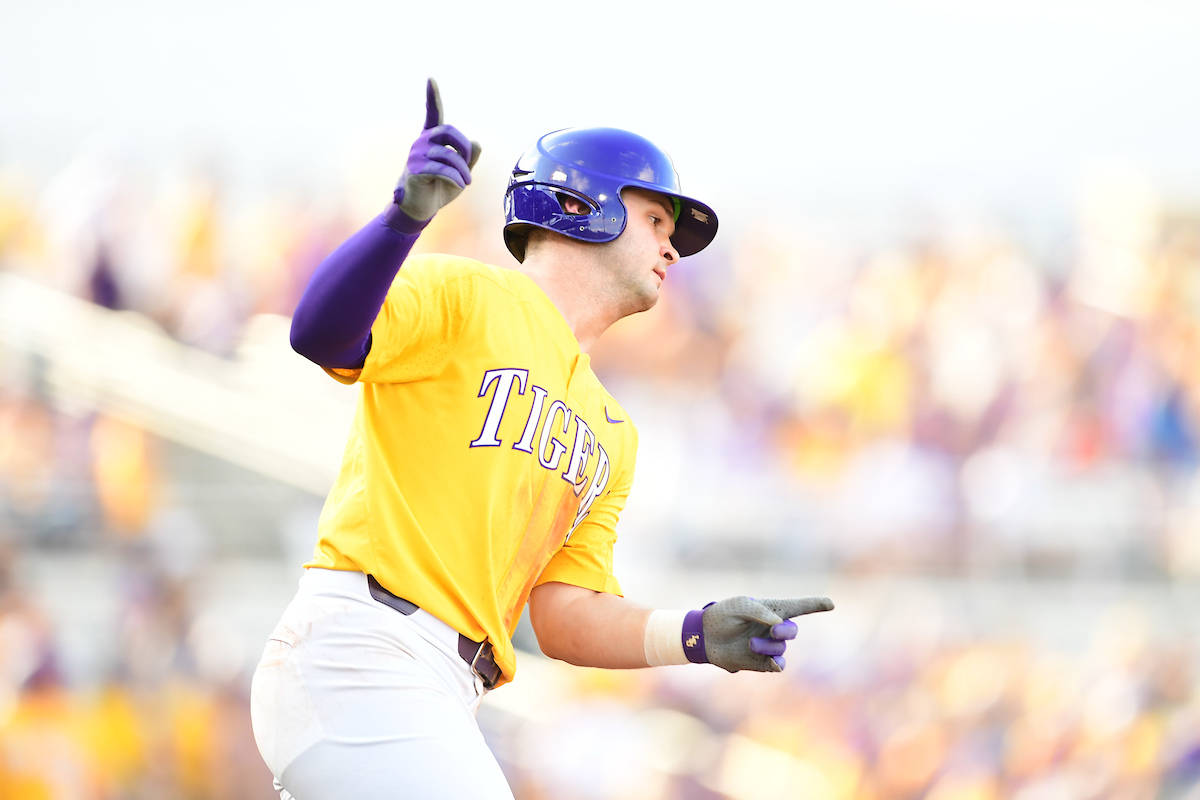 There were 35,463 fans in attendance for the weekend, which set the attendance record for a season-opening weekend at Alex Box Stadium, Skip Bertman Field.

For the 11th time in coach Paul Mainieri‘s 13 seasons, the Tigers have started the season 3-0. Air Force drops to 1-2 on the year with the loss.

“Having the huge crowds all weekend was phenomenal,” said LSU coach Paul Mainieri, “and it really opened the eyes of all of our new players of how special LSU Baseball is. I’m glad we were able to win all three games – I’ve think we’ve got chance to win with our bats when we need to, we can be dominant on the mound, and we’re going to have a very solid defensive team as well.”

The Tigers return to action at 6:30 p.m. Tuesday against Southeastern Louisiana in The Box. The game will be available online only through the SEC Network+, which is accessible through Watch ESPN and the Watch ESPN app.

The LSU-SLU contest may be heard on the affiliates of the LSU Sports Radio Network.

In his LSU debut on Sunday, freshman right-hander Jaden Hill was nearly flawless in firing five innings. The freshman allowed one run on four hits, walked one and struck out eight to earn the win and improve to 1-0 on the year.

“What a tremendous start for Jaden’s college career,” Mainieri said. “He struck out the side to start the game, and he was outstanding through each of his five innings.”

The Tigers opened the game with a seven-run first inning. Shortstop Josh Smith led off the bottom half of the frame with a single to second base, and second baseman Brandt Broussard dropped a bunt for a single of his own before right fielder Antoine Duplantis drew a walk to load the bases. With the bases loaded and no outs, left fielder Daniel Cabrera took a walk of his own to bring in Smith.

Center fielder Zach Watson ripped a double to right field to drive home Duplantis and Broussard. With one out and runners in scoring position, designated hitter Saul Garza smashed a two-run double off of the right field wall, and catcher Brock Mathis followed with a double of his own, which scored Garza.

There were two outs for Smith in his second at-bat of the inning when he slapped a RBI single to right field to bring in Mathis, finalizing the frame at 7-0.

“Everyone just did their job in that first inning,” said Mainieri, “and after two very close games to start the weekend, it felt kind of good to get a big lead early today. It was nice to have the kind of game where we could play a lot of guys who made their first appearances of the season and gained some confidence.”

LSU added to its score in the bottom of the second when Cabrera drilled a one-out double down the right field line and moved to third on a balk. Freshman first baseman Drew Bianco crushed a homer into left field to make it a 9-0 game.

In the bottom of the third, third baseman Hal Hughes doubled to left field, and Smith doubled in Hughes to increase the score to 10-0.

With Air Force left fielder Christian Gambale on second after a leadoff double in the top of the fourth, designated hitter Daniel Jones singled up the middle to make it a 10-1 game.

The Tigers tacked on three runs in the bottom of the fifth inning to extend its lead to 13-1. Hughes doubled to left field with one out, marking his first career game with multiple doubles in a game. In the next at-bat, Smith ripped a double to left field to put runners in scoring position. With two outs, Duplantis drove in Hughes and Smith with a double to right-center. In his first career at-bat pinch hitter Gavin Dugas slapped a single to third base, which put runners on the corners for Watson. An errant throw by the shortstop allowed Duplantis to score and cap the inning at 13-1.

In the bottom of the sixth, Garza singled to right field, and freshman Giovanni DiGiacomo singled through the right side to put runners on first and second. A walk loaded the bases for senior Chris Reid, who hit a sacrifice fly to drive in Willis, the pinch runner for Garza. With the bases loaded after a base hit by Braden Doughty, Duplantis singled through the right side to drive in DiGiacomo.

Dugas reached on a fielding error by the third baseman and was credited with an RBI after driving in Huges, and pinch hitter Cade Beloso scored Doughty on a sacrifice fly to right field to increase the lead to 17-1.

With one out and the bases loaded in the top of the second, center fielder Drew Wiss hit a sacrifice fly to centerfield that scored Alexander Pup. Third baseman Nic Ready hit a two-run single to cut the Tigers’ lead to 17-3.

Air Force Rob Dau led off the top of the eighth inning with a double to left field, and Ben Hauser entered to punch run for the catcher. With one out and Hauser on second, first baseman Gabe Martinez hit an RBI single up the middle. Martinez advanced to third on a ground out and then scored on a wild pitch to make it a 12-run game.