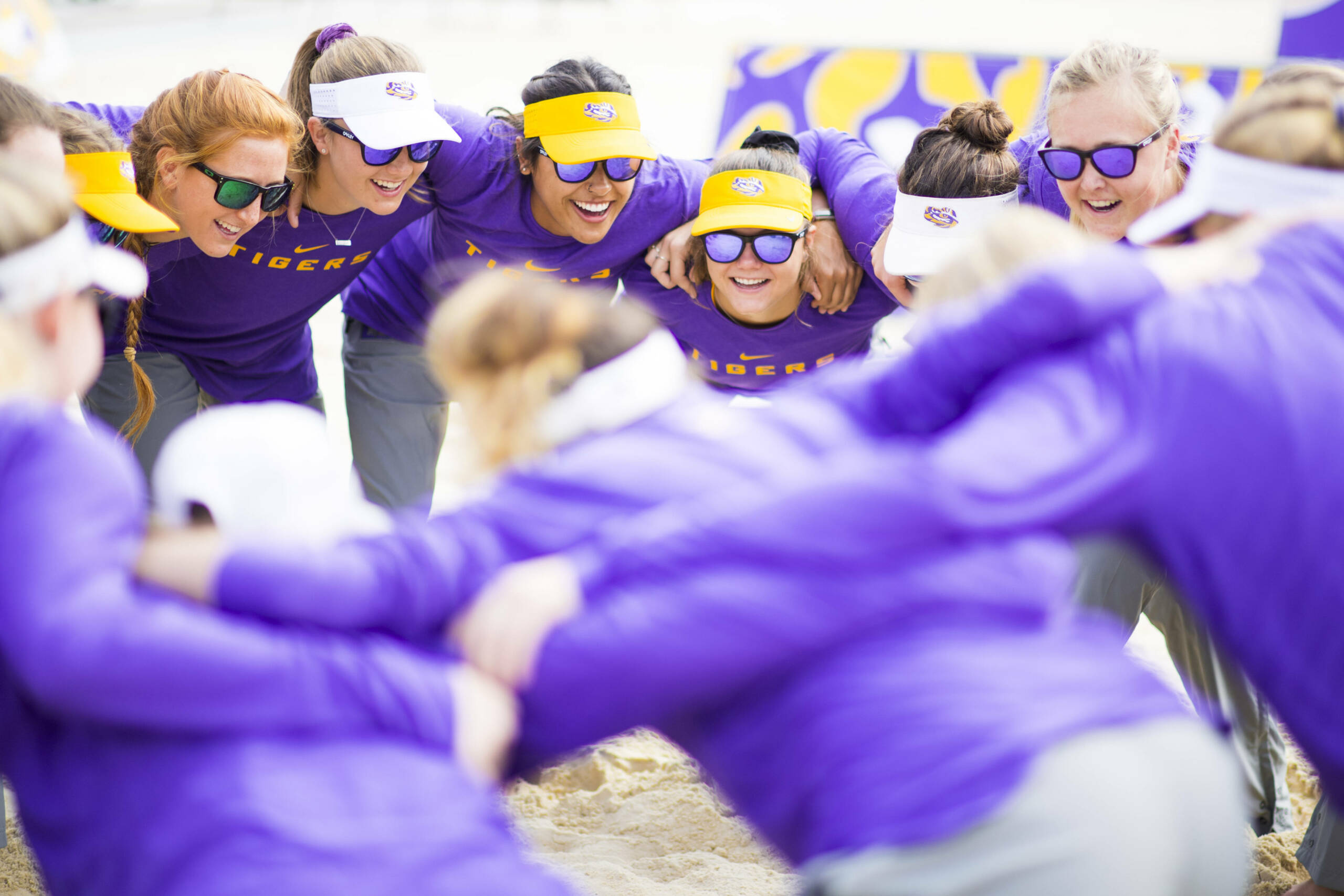 BATON ROUGE – In a tightly contested match, the Gold team came out on top by a set score of 11-9 in the Purple vs. Gold Scrimmage on Saturday.

The scrimmage consisted of two rounds of two sets each on five courts. Whichever team won the most sets out of 20 was crowned champion.

“The competition and environment brought a little more out of us,” said head coach Russell Brock who was impressed by his team’s depth today. “It’s super exciting. I don’t think today could have gone any better today.”

After the first round, both teams were knotted at five apiece. Melia Lindner and Kristen Nuss on Court 1 and Allison Coens and Hunter Domanski on Court 3 swept the two sets for Gold. For Purple, Toni Rodriguez and Kelli Agnew on Court 2 got the sweep. Purple also earned a sweep on Court 5 with Nicole Decker and Tatum Ballard in the first set and Decker and Alexis Toney in the second set.

Olivia Beyer and Megan Davenport with Purple and Caitlin Broadwell and Katie Kampen on the Gold team split the first and second set to leave the scrimmage tied at five after round one.

After getting swept in Round One on Court 2, Olivia Powers and Ashlyn Rasnick-Pope returned the favor on Court 2, picking up two points for the Gold team. Coens and Domanski finished with a sweep on Court 3 for the gold team as well.

Broadwell and Kampen kept Purple in the match though with a sweep on Court 4. Lindner and Nuss took the first set of Round Two on Court 1, but Rodriguez and Agnew stood tall with a win in the second set.

Despite Decker and Toney taking the second set on Court 5 for Purple, Gold was able to clinch the 11-9 set win when Savannah Wininger and Jeni Clark took the first set.

“I think our pairs did a good job of being responsible for where they were in the lineup,” said Brock. “We had people pushing the boundaries on every level.”

After the scrimmage was over the team lined up for autographs for the more than 290 people that showed up to LSU Beach Volleyball Stadium. The day concluded when all the kids in attendance were invited on the courts for a beach volleyball clinic.

“It’s awesome to have the opportunity to give back on the sport that we’ve gotten so much for,” Domanski said of the Kids Clinic. “It’s great seeing the kids develop as they grow up.”

“It’s awesome to see how many kids came to our match today and were out to support us,” said Coens. “It’s so nice to be able to give back to them and grow the sport here in Louisiana.”

The Tigers will kick off their season next weekend at the Home2 Suites Hilton-Tallahassee State Capitol Invitational hosted by No. 3 Florida State. Along with the Seminoles, LSU will face three other ranked opponents in No. 6 Cal Poly, No. 18 Tulane and No. 9 South Carolina.

LSU will hold its first home match on March 15 at 7 p.m. against Coastal Carolina for the LSU Beach Volleyball Stadium Dual.