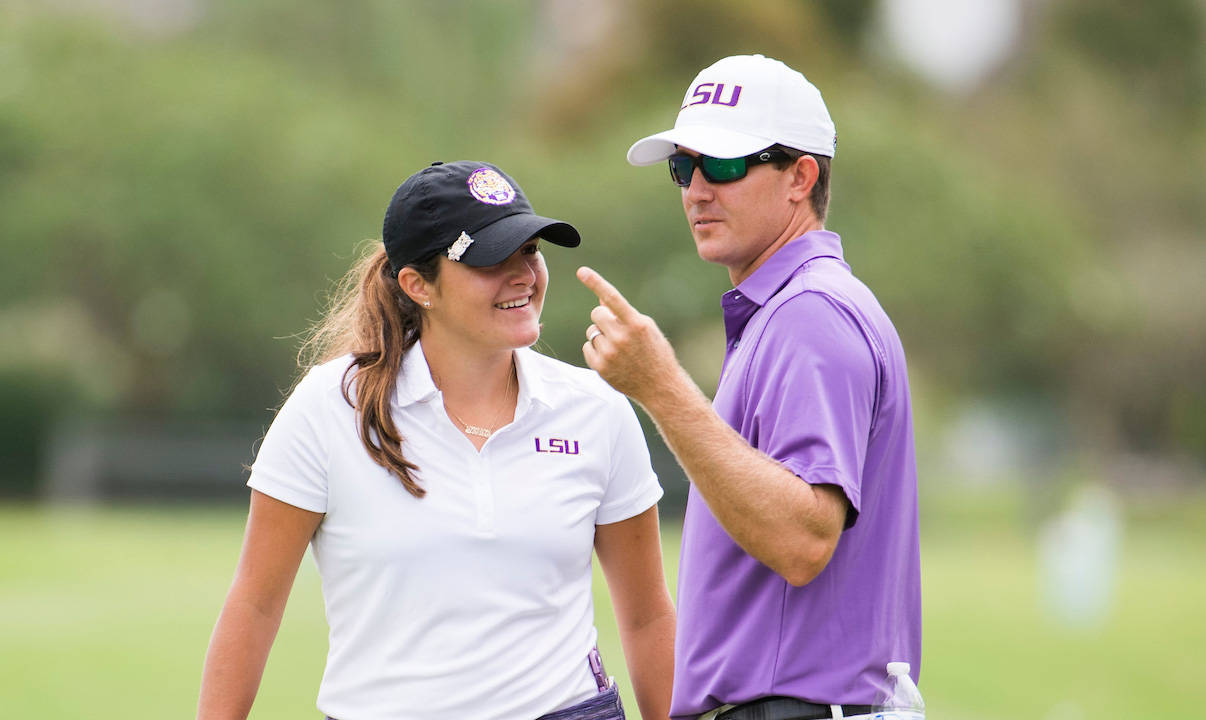 BATON ROUGE, La. – The LSU women’s golf team is geared up to start the 2019 Spring season at the Allstate Sugar Bowl Intercollegiate in New Orleans on February 17-19. The first two rounds at the English Turn Golf & Country Club begin at 9 a.m. CT with Tuesday’s third round action starting at 8 a.m. CT.

Kathleen Gallagher, Kendall Griffin, Monica Dibildox, Presley Baggett and Alden Wallace will be the lineup for the Tigers with Mary Frances Chauvin competing as an individual.

The team, under the direction of first-year head coach Garrett Runion, has made great strides through the first half of the season. LSU is currently averaging 297.78 per round, down from last season’s 301.96 average, over the first nine rounds of the season. After losing three rounds due to weather challenges in the Fall, LSU has added the Clemson Invitational to the calendar, April 7-9.

“Monica, by far, had the biggest improvement from last season to this season,” said Runion. “We’re looking for her to carry that over into the Spring after lowering her average by over four shots. That is pretty monumental and having every round under 75 and counting every round is a big reason why we had the success we had.”

“Alden’s trajectory has started off on a nice path,” continued Runion. “We hope it keeps going, because she is going to be a rock star, not only on the golf course but also in the classroom as well, making the Dean’s List her first semester.”

“Kathleen is motivated this semester as the backbone of the team. All of her teammates look up to her as the ‘grizzled’ vet. She had some meaningful rounds in the Fall that kept us in tournaments. They weren’t super low rounds, but when others were struggling, she was the one that kept us together and helped us have some of the finishes we did.”

The 18-team field includes host Tulane, and nine nationally-ranked teams – No. 1 USC, No. 3 Texas, No. 5 Duke, No. 8 Florida, No. 11 Auburn, No. 14 Arizona State, No. 16 South Carolina, No. 18 Washington, and No. 25 Miami (Fla.). Completing the field are SMU, Oklahoma State, UC Davis, North Carolina State, Houston, Michigan State, and North Carolina. Rankings are based on the February 12 Golfstat Team rankings.

“This is a really, strong field with nine of the top 25 teams in the country and several others sitting just outside the Top 25,” said Runion. “Any time you get a chance to play against the best teams, it let’s you know where you stand right away. We’ve talked to the team about this being our state and we don’t want those teams coming in and beating us. This is our state. We’re preparing our players to be mentally tough and view it as an opportunity who may not be showing us much respect right now.”

* Golfweek has the Tigers strength of schedule ranked No. 29 going into this week’s competition.

* Gallagher (Sr.) tied her career low in the first round of the Magnolia Invitational with a 68 and posted her best individual finish of the season. Her current scoring average is 74.33 on the season.

* Dibildox (Jr.) earned her second top-15 finish of the season at the Magnolia Invitational and has shot par or lower in three of her rounds played this season. She hit a career-low 70 in the first round of the Mason Rudolph Women’s Championship. Dibildox leads the team with a 73.22 scoring average, four stroke down from last season’s average.

* Griffin (So.) had her best individual finish of the season at the Magnolia Invitational and shot a season-low in the opening round. She also picked up an ace on October 18 in a practice round at LSU’s home course, the University Club, on Hole No. 8.

* Wallace (Fr.) has hit par or lower in 33 percent of her rounds as a rookie. She posted her career low of 68 in the second round of the Mason Rudolph Women’s Championship. Wallace finished that tournament with the first top-5 finish of her collegiate career, 5-under in a tie for fourth place. With her 73.78 scoring average, she is the No. 8-ranked freshman in the SEC.

* LSU’s tie for fourth place at the Magnolia Invitational gave the Tigers some crucial wins over SEC competition early in the season (Auburn, Mississippi State and tied Ole Miss).