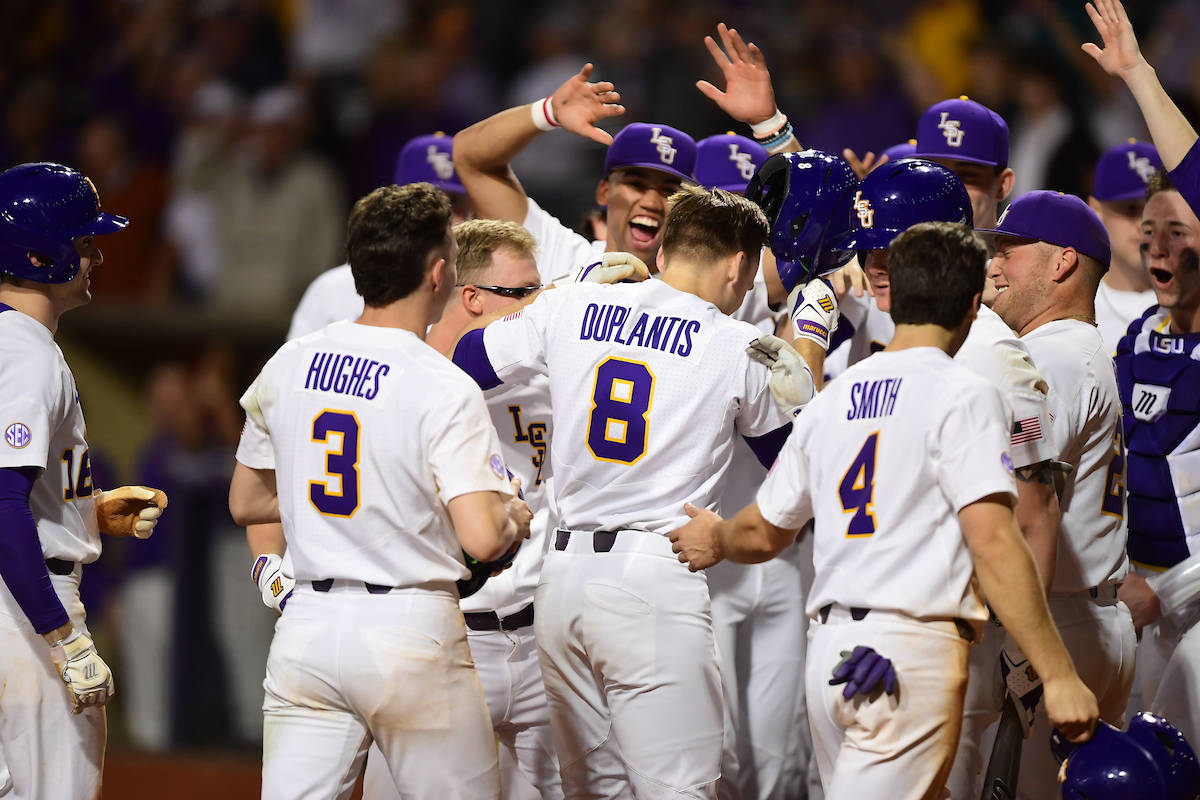 BATON ROUGE — Outfielders Daniel Cabrera and Antoine Duplantis each launched two home runs and combined for 11 RBI to lead the No. 1 LSU baseball team to an Opening Night victory with a 12-7 win against UL-Monroe Friday in Alex Box Stadium, Skip Bertman Field.

Cabrera’s two home runs in a game and five RBI were both career highs. It was the first multi-home run game for senior Duplantis. His grand slam in the bottom of the eighth was the second of his career. The first was on April 22, 2016, against Mississippi State.

LSU improves to 1-0 on the season while ULM drops to 0-1. It is the 18th-consecutive season that the Tigers have opened the year with a win.

The Tigers return to action Saturday against Army at 2 p.m. CT in The Box. The game will be available online only through the SEC Network+, which is accessible through Watch ESPN and the Watch ESPN app.

Due to LSU men’s basketball’s 5 p.m. CT game at Georgia, the LSU Sports Radio Network broadcast of LSU vs. Army will be carried locally on 100.7 FM and streamed worldwide for free at www.LSUsports.net/live.

“Daniel Cabrera was carrying the team on his back for the first five or six innings,” said LSU coach Paul Mainieri. “Then Antoine came through with a big home run in the seventh, and we had the huge rally in the eighth highlighted by Antoine’s grand slam.

“It was a hard-fought win,” Mainieri said. “I told our guys after the game that these are the types of games you’re going to have in an NCAA regional. ULM played very well tonight and gave us all we could handle.”

Right-hander Devin Fontenot earned the win for the Tigers after firing one inning and allowing two runs, one earned, on two hits. The sophomore struck out one.

Trent Vietmeier was the first Tiger out of the bullpen and closed the fourth inning.

For the first time on the mound since 2017, right-hander Eric Walker one-hit the Warhawks in 2.1 innings of work and struck out two.

ULM’s Ryan Humeniuk opened the game with a walk and stole second. The left fielder scored when right fielder Trent Tingelstad doubled to center field. In the next at-bat third baseman Chad Bell laced a ball over the left field fence to give the Warhawks a 3-0 lead.

The Tigers responded in the bottom of the first with two runs. With runners in scoring position and one out after shortstop Josh Smith reached on an error and second baseman Brandt Broussard, left fielder Cabrera hit a laser to left-center for a base hit to drive in both runners and cutting the ULM lead to 3-2.

With one out in the top of the third, Tingelstad hit a solo home run to right field. Prior to the right fielder’s dinger, Hess had retired seven-straight Warhawks. A single to right by first baseman Cameron Horton and an error put runners on the corners with two outs for designated hitter Andrew Beesley, who singled up the middle to drive in Horton and make it a 5-2 game.

Once again, the Tigers responded in the third inning. This time, with Broussard on first with one out after an infield single to second, Cabrera hit his first homer of the night. The two-run blast to left field put LSU within one run, 5-4.

LSU knotted the game in the sixth when Cabrera led off the bottom half of the inning with an opposite field blast.

The Tigers added to their lead in the seventh, making it a 7-5 game when Duplantis recorded his first home run of the night. He drove in Smith with his two-run bomb to right field with one out. Smith led off the inning with a single up the middle and advanced to second on a sacrifice by Broussard.

In the top of the eighth with one out and runners in scoring position, Humeniuk had his second hit of the night, a single up the middle, to tie the game 7-7.

That tie did not stay intact for long because the Tigers put up a five-spot in the eighth inning. With two outs, catcher Brock Mathis reached on a throwing error and moved to second on a wild pitch. Mathis moved to third on another wild pitch, which also put third baseman Hal Hughes on first with a walk.

Smith drew a walk to load the bases, and Broussard slapped a grounder straight at the third baseman, who was unable to field the ball, to score Mathis. Duplantis followed with a grand slam to put the Tigers up 12-7.

“Broussard gave us a tremendous at-bat in that situation,” Mainieri said. “He just smashed the ball, and their third baseman couldn’t make a play. Brandt had a very poised, competitive at-bat, and he smoked a ball to give us the lead.”

Freshman Cole Henry made his LSU debut and tossed 0.2 innings, allowing one hit, and Matthew Beck fired the ninth inning. The junior struck out two and walked two.