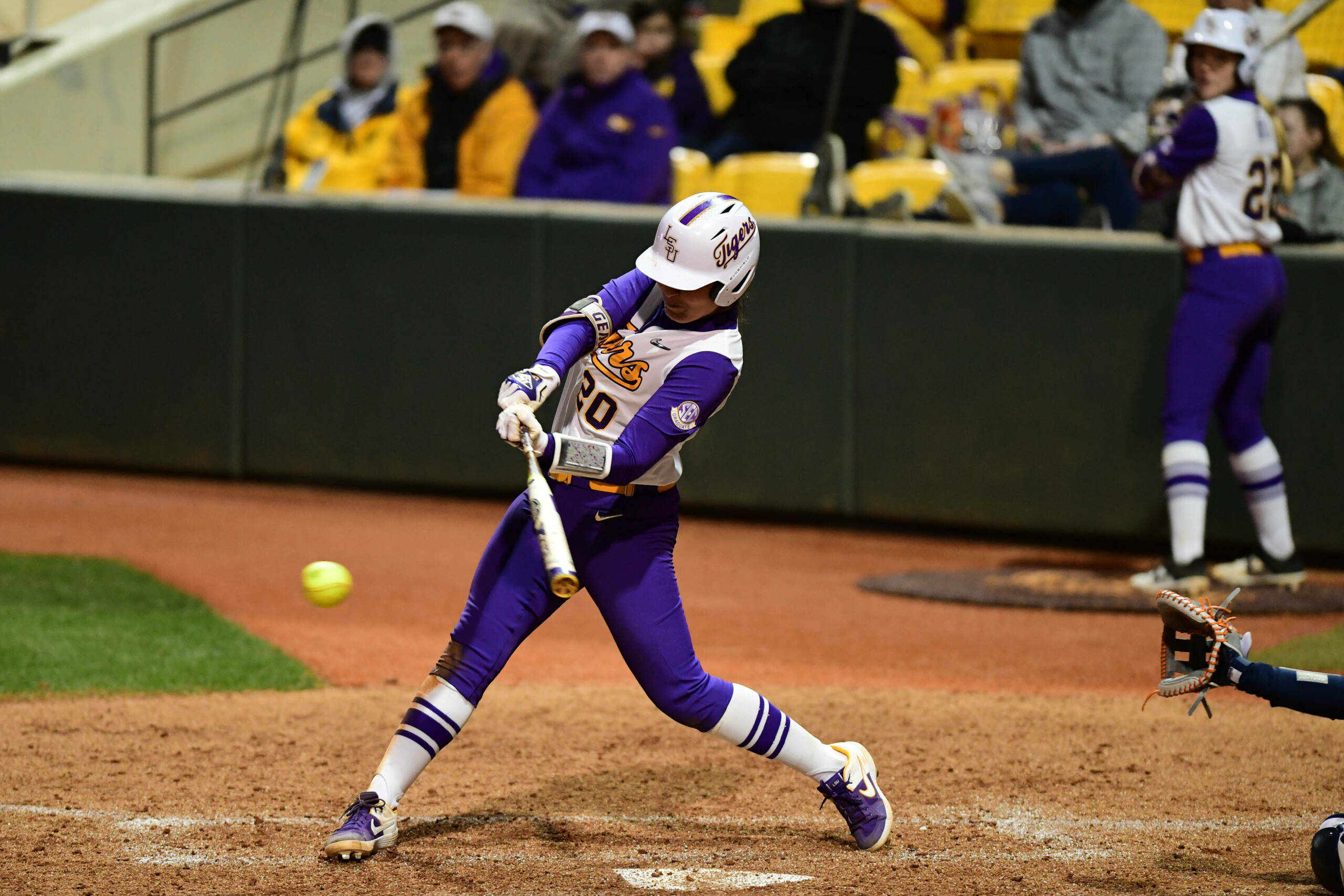 CLEARWATER, Fla. – The seventh-ranked LSU softball team split day two of the St. Pete/Clearwater Invitational giving up their first loss of the season to No. 19 Oregon, 8-5, and picking up the win against No. 12 Texas, 7-1. The Tigers are now 8-1 on the year.

Michaela Schlattman led the Tigers on the day with a .600 batting average. Amanda Sanchez, Shelbi Sunseri and Shemiah Sanchez all hit home runs and all had three RBI apiece.

The Ducks got on the board first in the top of the first inning, but it didn’t take LSU long to put up a run. With three Tigers on base, Shelbi Sunseri recorded an RBI, scoring Shemiah Sanchez.

In the bottom of the fifth inning, Aliyah Andrews reached first base with a single to shortstop, and was brought in to score by an Oregon wild pitch. With the ducks leading 4-2 and Amanda Doyle on third base, Sunseri hit her sixth dinger on the year to left field, tying up the game 4-4.

LSU had another chance to score in the sixth inning as Michaela Schlattman hit a double to right field with one out. Oregon held off the LSU bats.

Sunseri took the loss in the circle, dropping to 2-1 on the year. She had three back-to-back strikeouts in the top of the fourth inning, finishing with a career-high seven total strikeouts in the game. Jordan Dail earned the win for the Ducks, allowing two hits in seven innings.

Amanda Sanchez gave LSU an early 2-0 lead on a two-run homer in the first inning. Aliyah Andrews led off the inning with a single to first base then stole second to put herself in scoring position before Sanchez stepped up to the plate.

LSU put two more runs on the board in the third inning to extend its lead to 4-0. Andrews singled, Taryn Antoine reached on an error and Amanda Doyle was hit by a pitch to load the bases. Sanchez was then walked to push Andrews across home plate which resulted in a pitching change from Texas. Michaela Schlattman singled to shortstop to score Antoine.

Shemiah Sanchez put LSU ahead by seven in the fifth inning with a three-run homer over the center field wall. The Longhorns scored their first run in the sixth inning to cut LSU’s lead to 7-1.

Shelby Wickersham earned the win in the circle throwing 93 total pitches in 5.1 innings. Wickersham was relieved by Maribeth Gorsuch in the sixth inning. Gorsuch handled business and shut out the Longhorns in the final two innings to secure the 7-1 win. Wickersham is now 3-0 on the year.

On Deck
LSU continues into day three of the St. Pete/Clearwater Invitational, taking on Ohio State Saturday at 9 a.m. and No. 1 Florida State at 12 p.m. The second game will air on ESPN 3.