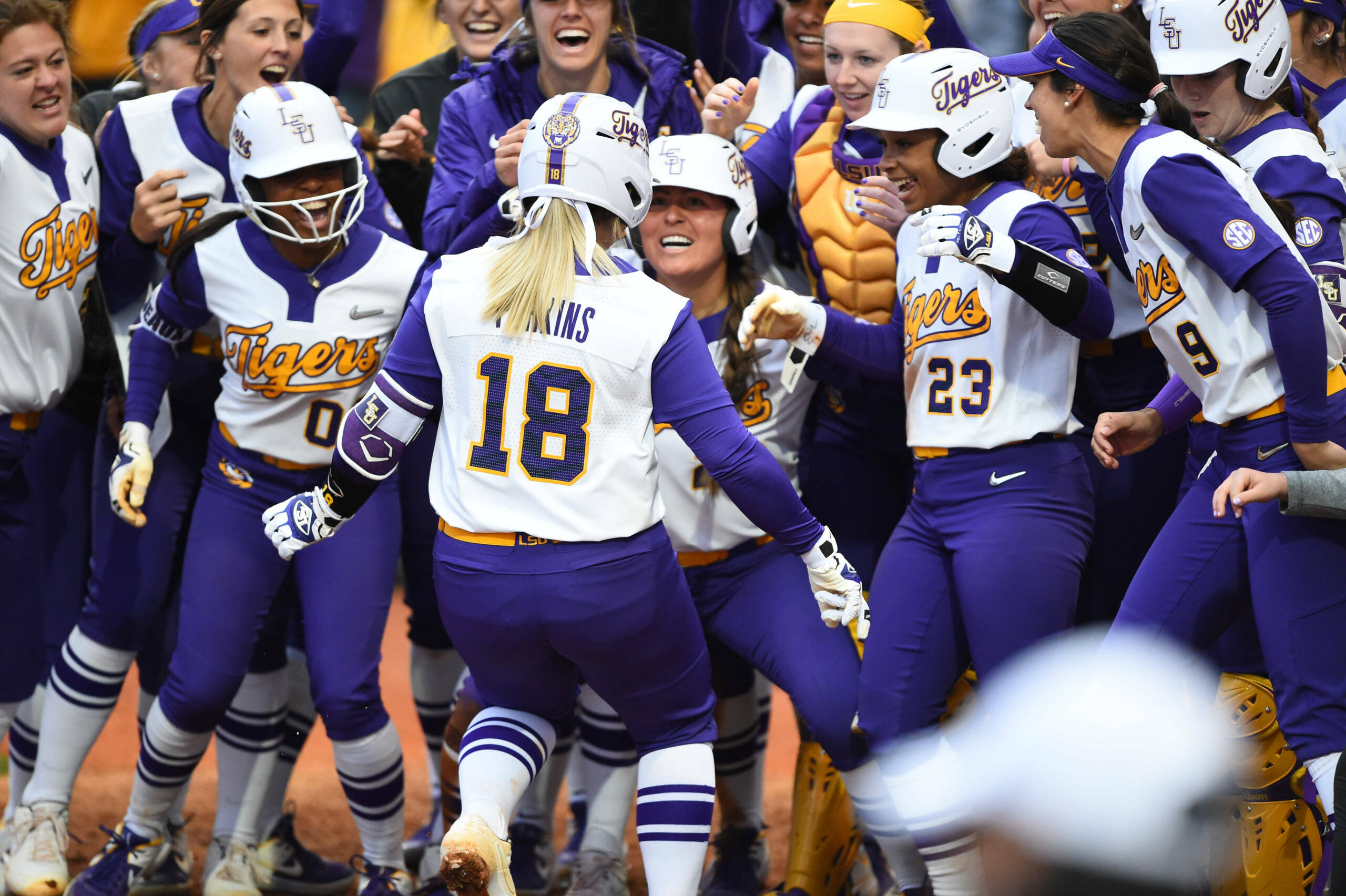 BATON ROUGE – The LSU softball team continued its offensive surge by defeating both Iowa, 16-1 and Bucknell, 10-0 in five innings on day three of the 2019 Tiger Classic. The Tigers improve to 5-0 on the year and remain undefeated in Tiger Park.

The offense put together a total of 23 hits on the day and had no errors in the field. Two Tigers went 3-for-3, freshman Morgan Cummins and Elyse Thornhill, with Thornhill collecting a total of four RBI.

Junior Maribeth Gorsuch and freshman Ali Kilponen secured both games in the circle. Gorsuch claimed her second win on the season and Kilponen recorded her first career win in her freshman debut.

On Kilponen’s performance…
“I thought she did a great job. I think she was able to pitch under a little bit of pressure and got us scoring early. She kind of had the luxury of having runs on the board the whole way, but she was able to keep it in check. She did a really good job. I was proud of her.”

Game 1
Taryn Antoine recorded three RBI in the bottom of the second inning after hitting her second triple on the season to right-center. Amanda Doyle doubled to left-center, allowing Antoine to score, followed by an RBI double from Amanda Sanchez.

The Tigers had a 6-0 lead on the Hawkeyes going into the third inning when a single from Morgan Cummins added two runs to the board. Singles from Aliyah Andrews and Amanda Sanchez brought in three more runs, giving the Tigers an 11-1 lead. Freshman Jordyn Perkins hit a three-run home run in her second career at-bat, giving LSU three more runs to raise the lead 15-1.

In the bottom of the fourth inning, Georgia Clark doubled to center field. A single from Sydney Bourg sent Clark home, the Tigers leading 16-1.

Maribeth Gorsuch held her ground in the circle, pitching a one-hitter on the day. She to ended the game in strikeout fashion, claiming her 13th career-victory in the circle. Gorsuch is now 2-0 on the year.

Game 2
After two scoreless innings, Andrews got on base in the bottom of the third inning with a single through the left side. Shelbi Sunseri ripped the ball up the middle, bringing Andrews in to score the first run of the game.

The Tigers picked up the momentum in the bottom of the fourth inning, starting with a single from Michaela Schlattman to center field. Elyse Thornhill drove the ball to right center, scoring two runs. Amanda Sanchez collected her fourth RBI on the day with a single through the left side, allowing Claire Weinberger to score. Back-to-back doubles from Amber Serrett and Thornhill upped the lead 10-0.

In her debut as a Tiger, freshman Ali Kilponen struck out the first three batters she faced in the top of the first inning. She pitched a two-hitter and finished with six strikeouts, improving to 1-0 on the season.

>> Kilponen put together her first career shutout in her debut, finishing with six strikeouts.

>> The two five-inning run rules brings the run-rule streak to five on the weekend, which is tied for the second longest streak for run-rule games in program history. The Tigers had five consecutive run-rules wins in 2015 and the record in seven from 2007.

The Tigers continue the 2019 Tiger Classic on Sunday, taking on Bucknell at 11 a.m. The game will stream live on SECN+.