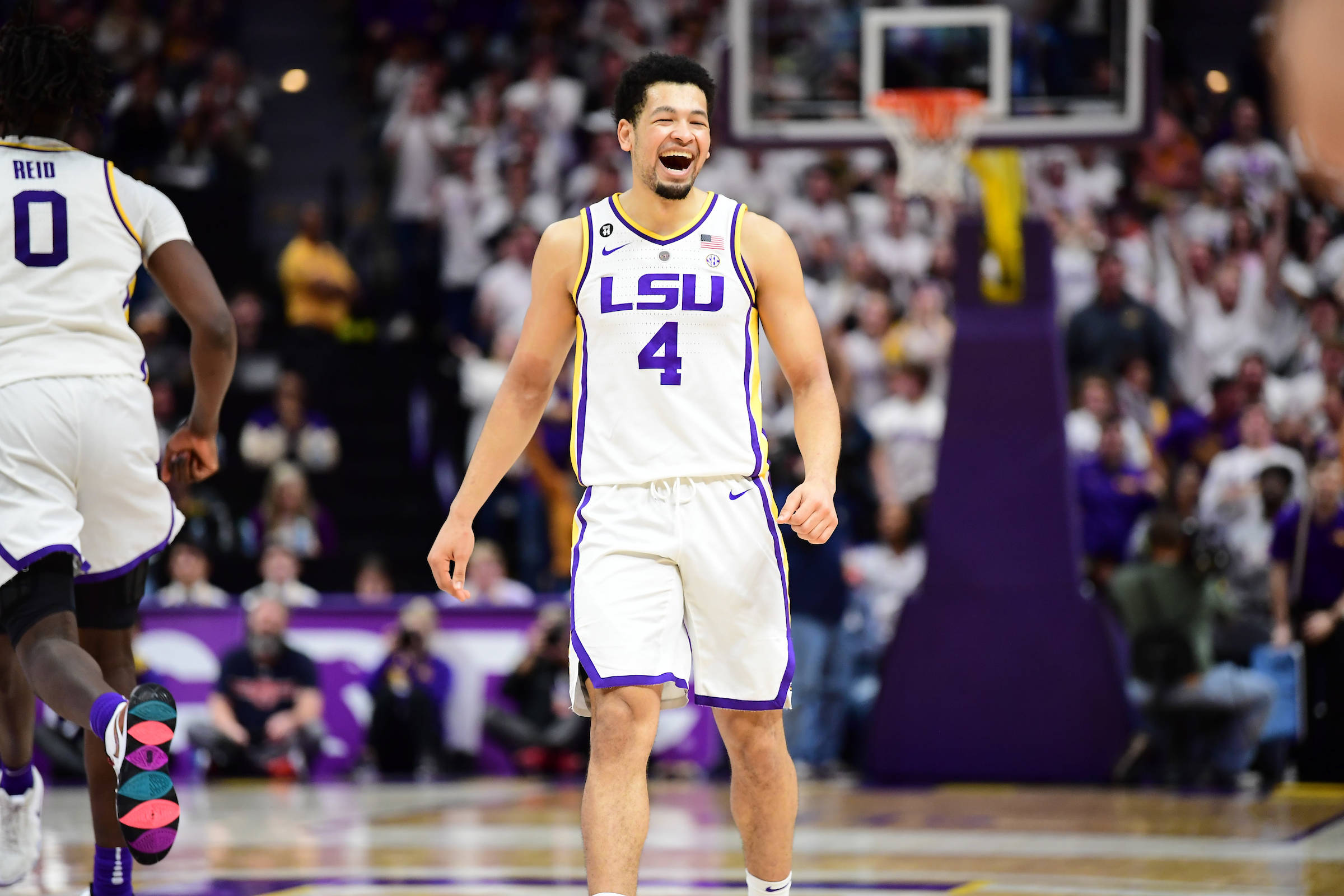 Most plays show up in the stat sheet.

Offensive rebounds? LSU had 22 of those on Saturday against Auburn, leading to 29 second chance points.

Turnovers? LSU forced 19 of those and turned them into 31 points.

Other plays, usually the most important ones, aren’t quantifiable. Yes, the game-tying attempt from three hoisted by Auburn’s Jared Harper – who’d already sunk five of his team’s 16 makes on the day – shows up in the box score as a miss.

What doesn’t show up, though, is who was guarding him, and, critically, how he knew exactly what Harper was about to do.

It was 6-foot-11 Naz Reid on the coverage, the product of a ball screen switch. Reid has a foot on Harper, but Harper has a step on Reid. As they engaged in their dance with the game on the line, LSU leading 81-78 with seconds to play, Reid had the critical, invisible edge.

“He knew when Harper puts the ball in his left hand, that thing’s going up,” said head coach Will Wade.

Sure enough, into Harper’s left hand went the ball. Into Harper’s space went Reid, contesting the attempt, forcing a miss, and icing an 83-78 win for the Tigers (19-4, 9-1 SEC).

A 6-foot-11 big with the ability to stay in front of a jitterbug like Jared Harper — special. pic.twitter.com/WL9ciVPcAx

“Once I saw the ball go in his left hand, I was just waiting for the jump shot,” said Reid, who also finished with 13 points and 10 rebounds. “He shot it, and I was able to touch it.”

The physical nature of Reid’s defense was impressive enough. To watch a near 7-footer slide step for step with a sub-6-foot jitterbug like Harper jars the senses.

But it was Reid’s mental discipline, combined with a scouting report detailed so finely as to be predictive of the future – that thing’s going up – that impressed his teammates and coach the most.

“We know that mentally and physically, he is perfectly fine being able to move,” said Tremont Waters, who joined Reid with a double-double of his own, scoring 16 points and handing out 10 assists. “He keeps them in front of him. But to have the discipline to back up and know he is going to shoot and keep the hand up, that just shows his level of maturity.”

Not that LSU didn’t impose its will physically, too. After falling behind 26-12 on a barrage of Auburn three-pointers, Wade’s Tigers clawed their way back in by dominating on the glass and in the passing lanes.  Kavell Bigby-Williams (7 points, 11 rebounds) led the charge on the former, securing seven of the Tigers’ 22 offensive rebounds. Marlon Taylor chipped in from the wing, too, with five of his seven rebounds coming off Tiger misses.

That effort crashing the boards combined with just 11 LSU turnovers fulfilled a common Wade axiom for this season: just get the shot up before turning it over, and the Tigers are so good on the glass that they’ll probably get a second crack at it.

So it was Saturday, as LSU – the conference leader in offensive rebounding percentage – rebounded half of its misses.

“It’s pretty simple: We just go (to the offensive glass) every time,” Wade said. “We chart how many times you go. You have to go 80 percent of the time, plus. Most of the battle is just getting your guys to go and go hard.

“When you don’t shoot it great, you better make up for it in other ways. We create turnovers and get on that offensive glass.”

The late stop by Reid, who grabbed four of those offensive rebounds, wasn’t his only play done injustice in the postgame stats. He also threw home a thunderous reverse dunk with 8:42 left that gave LSU a 64-54 lead and brought a crowd of 12,004 to its loudest roar of the night.

“I tried to break the rim, to be honest,” Reid said.

He wasn’t the only Tiger to pass a test with flying colors Saturday. Skylar Mays, a pre-med student fresh off exams Thursday and Friday, overcame a recent shooting slump to pour in 20 points. It was his first 20-point night since Jan. 26 at Missouri.

“My shot hasn’t been falling for a while,” Mays said. “The biggest thing for me was continuing to stay in the gym and stay with my routine and taking shots I’m comfortable with and trusting that they’ll fall based on all the work I’ve put in.”

Wade, who talks as much about his players’ mentality as he does their physicality, sees the connection between the two facets of his players, particularly one like Mays, whose coursework is so rigorous.

“Guys, he had a physics test Thursday,” Wade said. “He had an anatomy test last night at 7 o’clock. Who in here can perform well when you’re studying for those things?

“It’s just a matter of lightening his load a little. You could see the weight of the world off his shoulders this morning after those tests. These kids have other stuff going on. It’s like he’s wearing a weight vest when he’s shooting.”

In the middle, Wade was happy to add this aside: “He did very well on both tests.”

Through 10 SEC tests, LSU has done exceedingly well, too, remaining a game back of league leaders Tennessee heading into a Tuesday road matchup with Kentucky, also 9-1 in the conference. This, despite falling behind by double digits for the fourth time in five games.

“I like that our team hangs in there,” Wade said. “Sometimes we’re hanging by a fingernail.”

Fingernails don’t show up in the stats. Neither do shots contested, scouting reports mastered, or physics exams aced.

But they work together, silently, unquantifiably, to produce very quantifiable results: wins. Nineteen of them, to be exact.