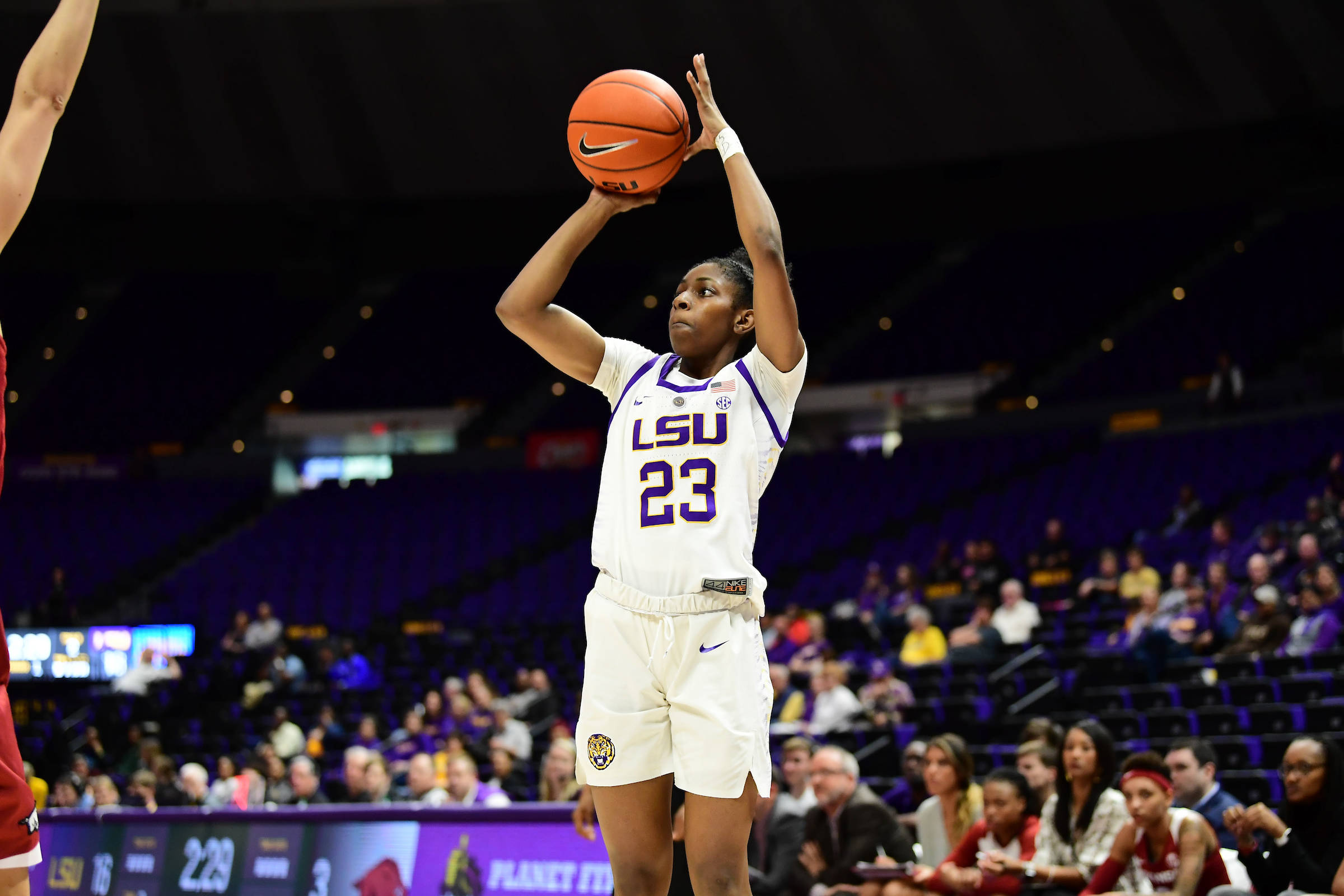 BATON ROUGE – The LSU women’s basketball team was firing on all cylinders as it took down Arkansas 71-34 on Thursday night in the PMAC.

It was a balanced attack from the Lady Tigers as the entire roster scored and four players scored in double-digits with Ayana Mitchell leading the charge.

Mitchell finished with 21 points and 17 rebounds. Shanice Norton scored 13 in the win while Khayla Pointer and Karli Seay put up 10 points each. It was a career-high for Seay.

The Lady Tigers dominated in every aspect of the game from scoring to board play. LSU out-rebounded Arkansas 46-26. With their 13 offensive rebounds, the Lady Tigers were able to score 15 second chance points.

“We were clearing all those defensive boards which allowed us to keep [Arkansas] off of the offensive glass,” said LSU head coach Nikki Fargas. “They are a good, offensive rebounding team. When you keep them off the glass, you’re able to control the tempo of the game.”

Fargas said that the pace and tempo was in LSU’s favor for almost the entirety of the game which gave the Lady Tigers the advantage in executing their game plan.

“The pace that we wanted to play at was very much in our favor,” Fargas said.

Coming into the game, Arkansas averaged just 10 turnovers per game in conference play. LSU was able to force 18 turnovers on the Razorbacks and score 25 points off of those turnovers.

“It was a great effort on our part just staying locked in to the game plan and executing,” Fargas said.

LSU pulled away early in the first quarter going on a 10-0 run sparked by a layup from Mitchell. At the end of the first, the Lady Tigers led 18-5.

LSU continued to build on that lead in the second quarter holding Arkansas to five points for two consecutive quarters. At the break, LSU led 36-10.

Arkansas put together their best offensive effort in the third quarter, outscoring LSU 17-13.

The Lady Tigers went on a 16-0 run in the fourth quarter and held a 40-point lead with two minutes remaining in the game.

“We just played tough,” Fargas said. “Arkansas is a very explosive team. They do a great job of pushing tempo. We really locked in defensively and we tried to push tempo back at them.”

Up next, the Lady Tigers will travel to College Station to face Texas A&M on Thursday, February 14 with tip-off set for 6:30 p.m.