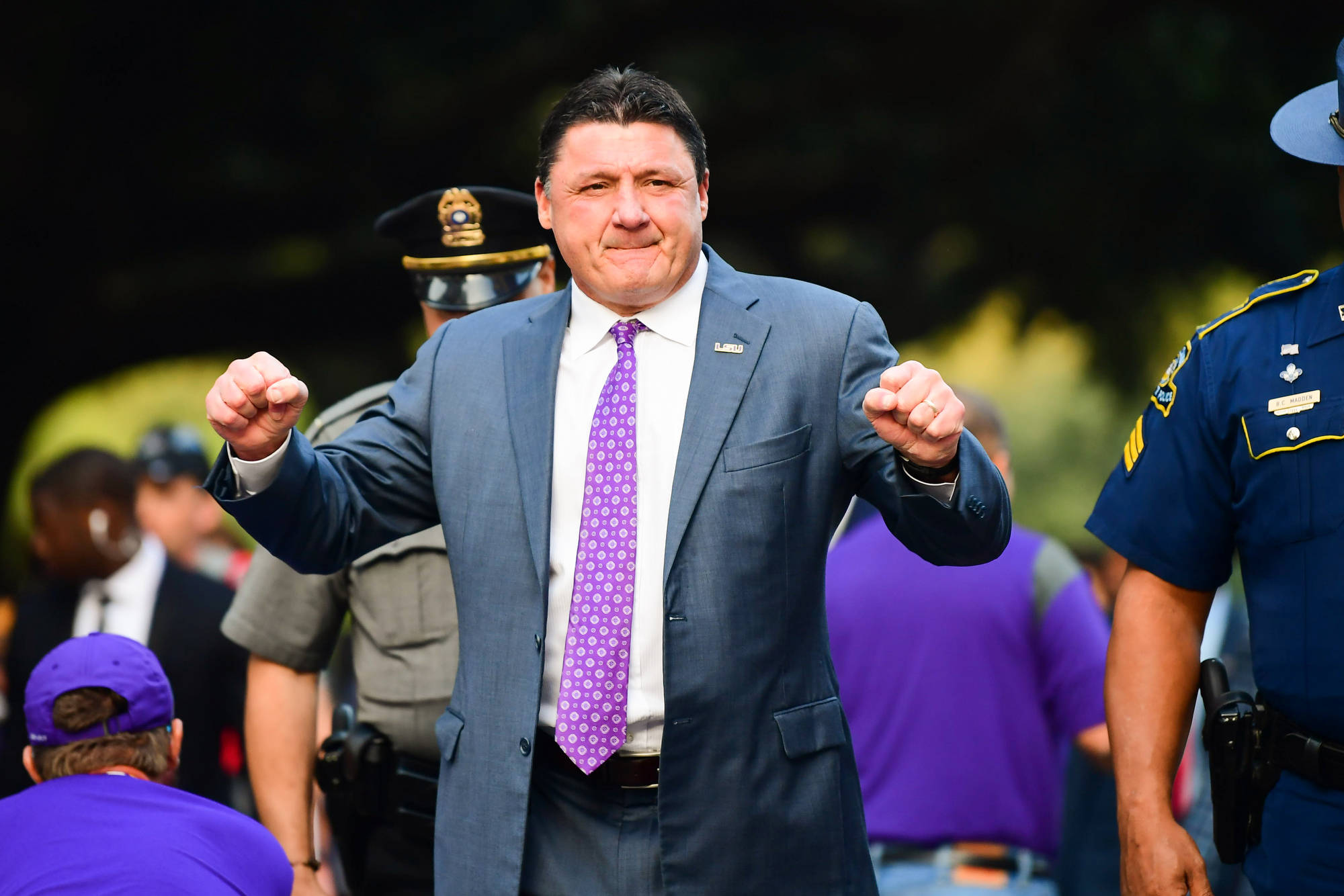 After signing six more players to LSU’s highly-ranked 2019 recruiting class, head coach Ed Orgeron met with the media on National Signing Day to talk about the new additions to his class. Here are a few takeways.

“There were some other schools coming after him hard,” Orgeron said. “Him not signing in December, I got a little nervous about it.”

Orgeron, however, leaned on a pinch-hitter in the recruiting process for Hampton, who is also one of the top baseball recruits in the country. At the suggestion of safeties coach Bill Busch, Orgeron teamed up for a dual-pitch meeting with baseball coach Paul Mainieri to close with Hampton.

The Class of 2019 is Official
Hold That Tiger! pic.twitter.com/gt1DbMiS76

Orgeron called it “the turning point” in Hampton’s recruitment, and the 6-foot, 210 pound defensive back/outfielder signed with the Tigers on Wednesday.

Neither Mainieri nor Orgeron is a stranger to two-sport athletes. Mainieri coached Jared Mitchell, Chd Jones, and Jared Foster, all of whom played football and baseball at LSU, while Orgeron is currently coaching Kary Vincent, who spends his springs with the LSU track program.

“He had a nice plan,” Orgeron said of Mainieri. “He had done it before. We worked together. I invite two sport athletes. I thought it worked out great. We have guys who work out at track. We work well with the track coaches, and I do believe we’ll do the same with Coach Maineiri.”

While LSU no longer has to worry about SEC rivals courting Hampton away from Baton Rouge, there is one hurdle left to clear: the Major League Baseball Draft taking place June 3-5. Hampton is the No. 27 prospect eligible for the draft, according to MLB.com.

“We did our research,” Orgeron said. “We talked to his parents. If he’s drafted very high and gets some big money and it’s good for him and his family, God bless them. We don’t know if that’s going to happen. I think we’re going to have to wait it out.”

Remember with cornerback depth was a concern for LSU, both to start and to finish the 2018 season?

Consider that concern put to rest.

On Wednesday, LSU added two more defensive backs – Hampton and Georgia native Jay Ward – to bring their total haul for the 2019 class to five. That duo joins No. 1 overall prospect Derek Stingley, Cordale Flott, and Raydarious Jones to give defensive backs coach Corey Raymond five corners to work into his rotation next season.

Orgeron said Hampton can play safety or nickel but will start his career as a corner. Ward, meanwhile, was a late addition to the class who pledged to LSU on Wednesday morning.

“He wanted to compete at the highest level,” Orgeron said of Ward. “He was one of the best players available for us. He probably would’ve started for us in the bowl game.

“We cannot have enough corners. Here’s what happens here at the corner position. Corey does such a good job of recruiting them and coaching them that we have them three years and they’re out. So the turnover is very fast, so the more good players we can get in that position, the better.”

Stingley, an early enrollee, is already impressing just weeks into his LSU career. Orgeron said he could solidify a starting position at cornerback by the end of spring practice.

The four-star prospect is the first Amite player to sign with the program since 2002, and Orgeron couldn’t have been happier about landing the 6-foot-2, 212 pounder.

“We’re excited about that,” Orgeron said. “We watched the tape of the state (title) game, and we felt Devonta was the best athlete on the field. We watched him play basketball. I want to commend Mickey Joseph for an outstanding job. Devonta is going to do some great things for LSU.”

Hold that Tiger! Congrats to Amite’s own Devonta Lee on signing to play football with LSU! Donna and I are looking forward to the many great things you will do on and off the field for #LSU and Louisiana. #TangiProud #NationalSigningDay pic.twitter.com/I8uP9byums

– “We feel we found a diamond in the rough in Desmond Little. He’s 6-6, 220. Plays basketball, runs track. Runs the 100, runs the quarter (mile), ran a 23.3 200 meter. He has a 12-foot, 9-inch long jump. Outstanding athlete. He silently committed to us a while ago, and we’re glad we signed him.” – Orgeron on Little, a three-star prospect from Alabama who was a long time silent commit to LSU

– “Game changer. Joe is a game changer. We researched Joe, since he came here last summer. The Saints came in, and we wanted to research the run-pass option game. Joe just took it over. We could tell right there – this guy is special.” – Orgeron on new passing game coordinator Joe Brady

– More on Brady: “When we signed him, (Mississippi State head coach) Joe Moorhead texted me and said, ‘Wow. You’ve got yourself a home run there.’ Joe’s very bright. He’s dynamic. He’s an expert in the RPOs. It’s something we always wanted. Our staff is gelling together with him. We are re-tooling our offense. It’s exactly what I wanted from the get-go. I think Joe Brady and Steve Ensminger are going to work well together. The first day we announced him, I thought the players went crazy. I’ve never seen them go crazy for an assistant coach like that. They like him. He’s 28 years old. He’s just as old as our punter, so I’m sure he knows how to relate to them.”

– Orgeron said tight end Ray Parker is going to be academically eligible, which is why LSU was able to add him on National Signing Day. He also compared Soni Fonua, a junior college edge rusher signed on Wednesday, to former defensive lineman Lewis Neal: “I love Soni. I think he’s going to come in and play. He reminds me of Lewis Neal. He can play 3-4 end, play a four technique. He has the athleticism to play a six technique, play on the edge.”