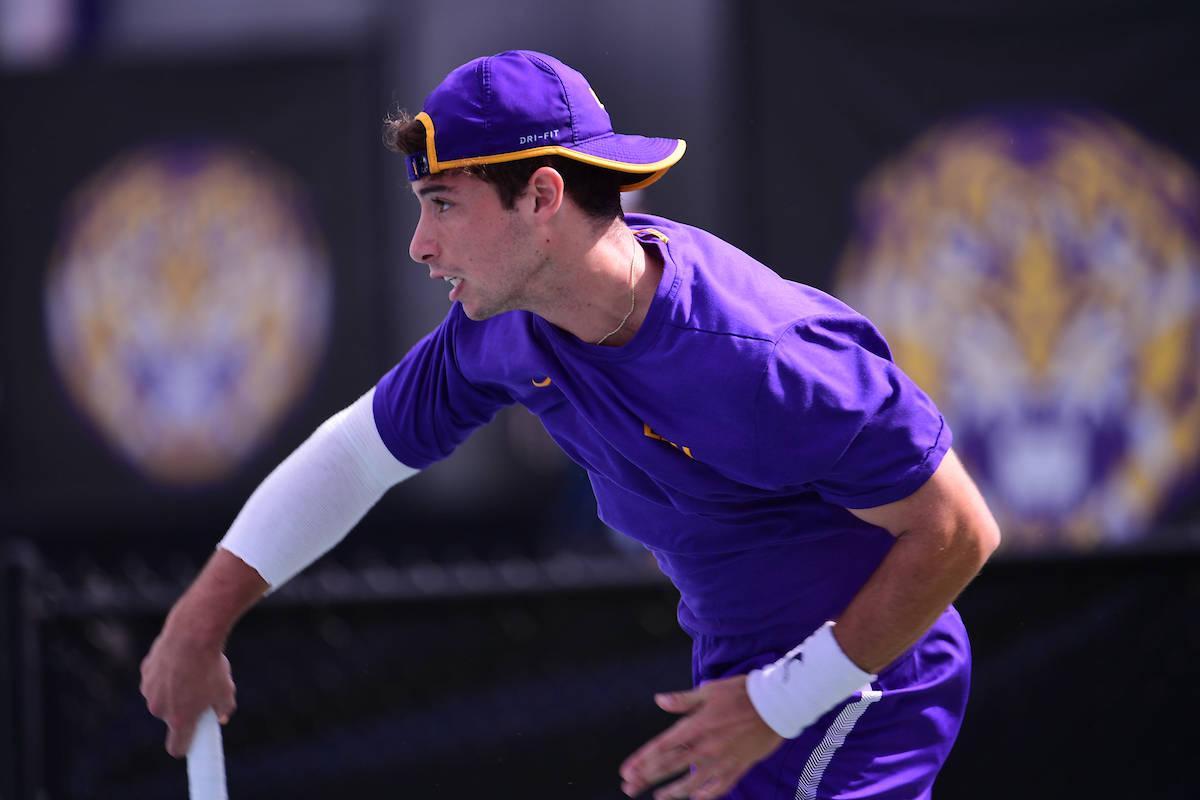 BATON ROUGE — The LSU men’s tennis team handed Rice its first loss of the season with a dominating 6-1 victory Sunday afternoon at the LSU Tennis Complex.

Co-Head Coach Chris Brandi on the Match
“Our guys did a great job on the road in a tough environment Friday at Tulane, but we needed to make sure that we were prepared for this match,” co-head coach Chris Brandi said. “Rice has beaten us pretty often in the past few years, and we were excited to get a chance to have them come in town and do a men’s and women’s tennis match again, which was a lot of fun. Our guys did a great job. They took care of business. Rice is a better team than they were last year. They beat us 4-3 in Houston, but I think we are a lot better this year. We are starting to compete really well. Our guys are taking care of business. We did a great job today. I really don’t think there’s a lot that we would have asked them to do differently today. Top to bottom, we had great effort and finally got some momentum.”

Doubles Point
Freshman duo Boris Kozlov and Nick Watson took a 6-2 win from Jacob Eskeland and Daniel Warren on court three to get the match started for the Tigers.

On court one, Rafael Wagner and Joey Thomas fell for the first time this season after dropping their match to Sumit Sarkar and Eric Rutledge, 6-3, forcing the doubles decision to court two.

Daniel Moreno and Shane Monroe started off the match with a 3-1 lead one court three and gave up only one more game to Mohamed Abdel-Aziz and Conrad Russell to secure the doubles point with a 6-2 win.

Singles Results
The Tigers jumped out to the 2-0 lead after Watson swept Adam Oscislawksi, 6-2, 6-2, on court six.

Sarkar pulled the match within one after he defeated Monroe on court one in straight sets, 6-1, 6-2, but the Tigers were quick to make it a 3-1 game when Kozlov worked a 6-3, 6-1 match against Abdel-Aziz on court four.

Thomas clinched the match for the Tigers on court five, easily taking the first set from No. 111 Russell 6-1 and showed grit in the second with a 7-5 set.

Bhatnagar extended the Tigers’ lead to 5-1 with a 6-2, 6-4 victory on court three against Rutledge, and Wagner wrapped the LSU victory with back-to-back 6-4 sets against Eskeland on court two.

Next Up
LSU will go on a three-match road swing. The Tigers will start their road trip facing Memphis on Sunday, Feb. 10 at noon CT. They will then travel to SMU on Feb. 15 and Tulsa on Feb. 17.