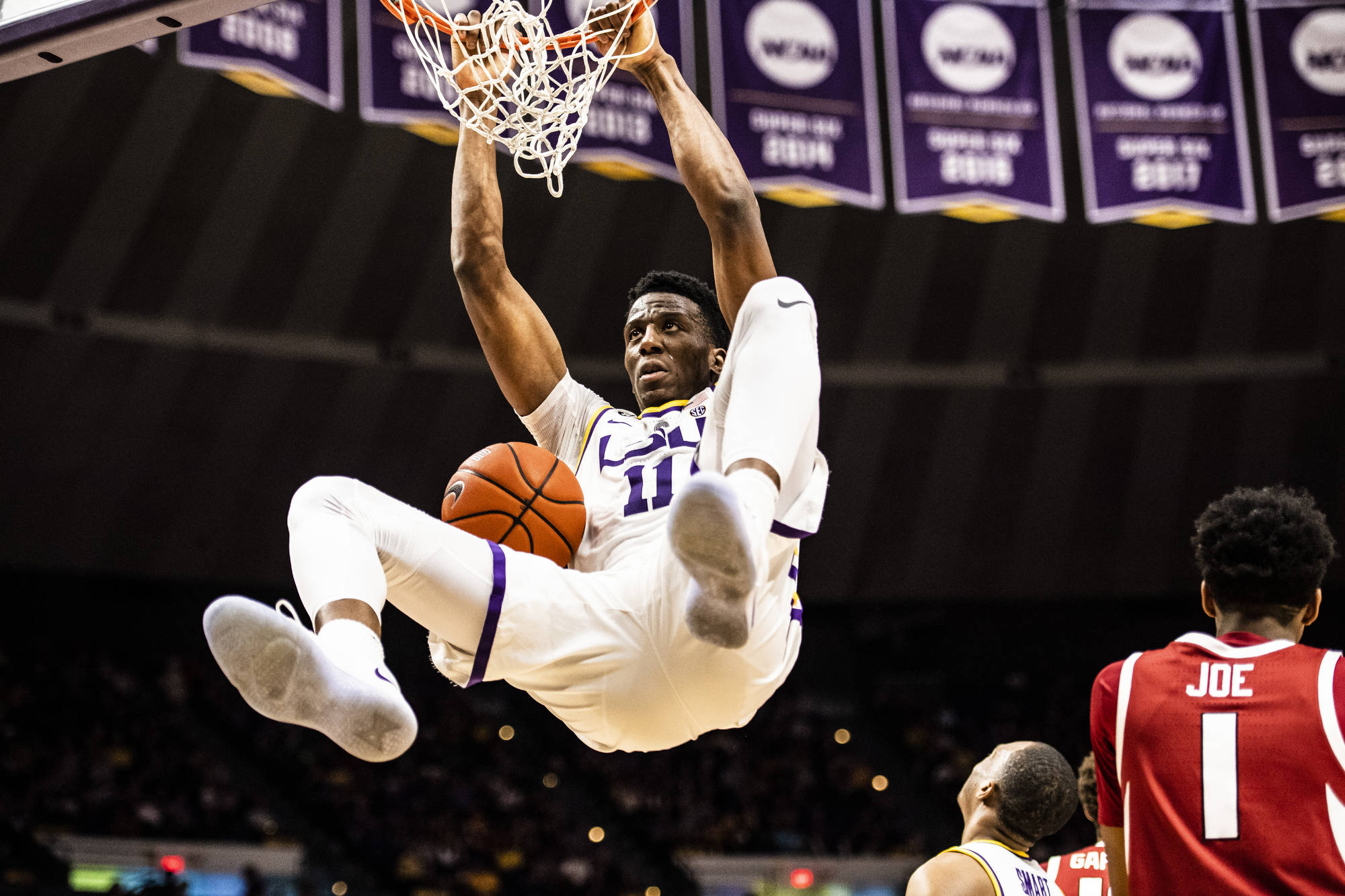 Trailing Arkansas by 18 in the second half on Saturday, LSU performed its high wire comeback act yet again.

This time, however, the tightrope gave way.

A week after roaring back from 14 down with two minutes left to knock off Missouri on the road, the Tigers pressed, rebounded, and clawed their way back from a 66-48 hole with 13:45 to take a one-point lead with less than a minute to go. Their efforts brought a sellout crowd of 13,311 to their feet, as LSU appeared to have, once again, overcome a wobbly start with a late rally.

Appearances can be deceiving, though. Defy gravity for long enough, and it’s bound to exact revenge.

On Saturday night, that revenge took the form of a 90-89 Arkansas win, as LSU (17-4, 7-1 SEC) went scoreless on its final two possessions to drop its first conference decision of the season. Arkansas, meanwhile, used a Mason Jones jumper with 22 seconds left to restore its long-held lead and snap the Tigers’ 18-game home winning streak.

“We’ve been cruising for this for a while,” head coach Will Wade said after the game. “This was kind of the same as Missouri. We escape that one.

“When you walk a tight rope like we’ve been walking for two weeks, you’re eventually going to fall off.”

After the Missouri win, Wade joked his team was out of mulligans. A week later, it looked as his team had found one more in the bag.

It was then Wade went to the same diamond press that caved Missouri in, with similar effect.

Arkansas coughed it up eight times in the final 12 minutes against the Tiger press, while simultaneously going cold (8-of-20) from the field. LSU outscored the Razorbacks 30-12 over a six-minute stretch, pulling ahead improbably on a near-impossible layup from Javonte Smart with 3:39 left.

All the while, the PMAC crowd grew to its loudest in years, spurred on by the energy of Smart and Naz Reid, who combined for 23 points in the second half.

“I thought the fans were awesome,” Wade said. “They almost willed us back. I thought they were phenomenal. That was as loud as I’ve heard the arena since I’ve been here.”

Smart showed his competitive nature throughout the comeback, pumping up the crowd even when the deficit was in double digits and making a number of hustle plays.

“When we were down, we knew they would help bring us energy,” said Smart, who finished with 18 points, 3 rebounds, and 2 steals. “The energy helped us come back.”

So, too, did Reid, who played one of his best games as a Tiger, finishing with 19 points on 5-of-9 shooting and grabbing 10 rebounds. After dropping 27 in Fayetteville last month with a heavy dose of three-pointers, Reid used his back-to-the-basket game on Saturday, getting to the line nine times and making eight.

He also led the charge for LSU on the glass, where the Tigers outrebounded Arkansas 44-20, including 19 offensive rebounds.

“I knew rebounding was going to be a big part of today’s game,” Reid said. “Obviously it was not enough, but rebounding the ball and taking control of the game with my size and strength happened toward the end of the game. I just had to do my job.”

It was enough to retake the lead, but not enough to hold on to it. After Jones put Arkansas back ahead with 22 seconds left, LSU had three looks at the basket, but none fell.

It’s easy to dwell on the late mistakes – a turnover here, an ill-advised shot there – and they are learning experiences.

But Wade remained more concerned about the hole his team dug for itself early rather than its failure to escape from it.

“They played harder than we did for a majority of the game,” Wade said. “We cranked it up there with 14 minutes left…We didn’t guard them nearly as well as we needed to.”

“Just a tough loss for us.”

With the loss comes a lesson, though Wade rebuffed a reporter’s question on if a loss now can lead to a win later.

Losing stinks, but there’s value in learning. And Reid, at least, has learned.

It’s time to pack up the tightrope and find another act – preferably one with a better start.