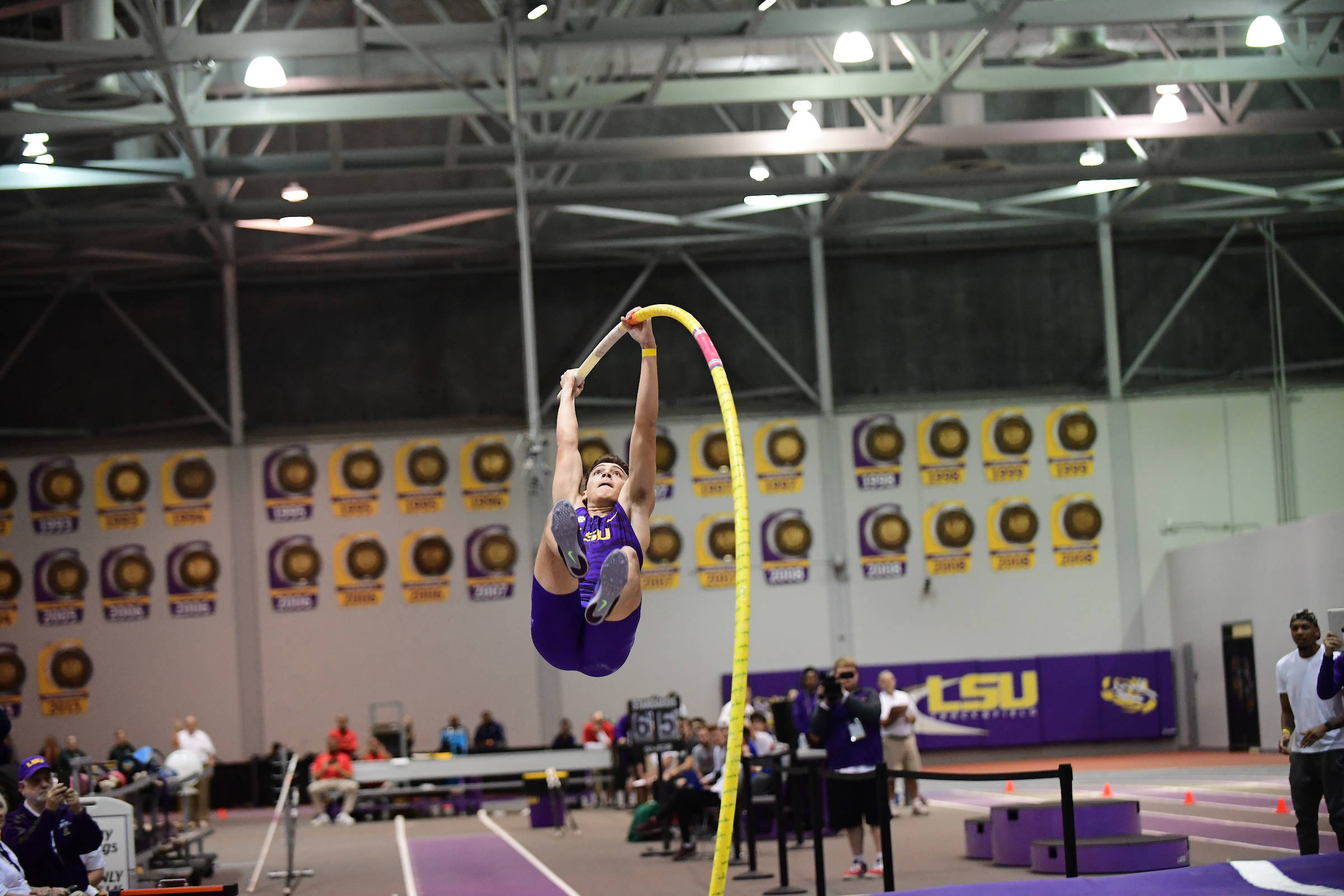 Baton Rouge, La. – Mondo Duplantis delivered an epic performance to the hometown crowd on day two of the Bayou Bengal Invitational at the Carl Maddox Field House on Friday night.

Competing for the first time as a collegian in the city of Baton Rouge, Duplantis set a Carl Maddox Field House record of 5.87 meters (19′ 3”). Duplantis started his evening with a clearance at 5.52 meters (18′ 1.25”) before he progressed to a height of 5.67 meters (18′ 7.25”). The height gave him a little bit of trouble initially before he cleared it on his third and final chance at the height. After Southeastern Louisiana’s Devin King bowed out at that same height, Duplantis set his sights on the 2019 world lead with a bar height of 5.87 meters (19′ 3”).

Piotr Lisek, a native of Poland, owned the world lead entering Friday after he cleared 5.85 meters (19′ 2.25”) on Wednesday, but obviously, that didn’t last long. Duplantis missed his first attempt at 5.87 meters before he re-upped his school record on the way to setting the second-best mark in NCAA indoor track and field history with a clearance of 5.87 meters. The clearance enabled him to pass Jacob Davis of Texas (5.85m/1999). Not calling it a night, Duplantis attempted to set the collegiate record with a bar of 5.92 meters (19′ 5”), but he was unable to clear that height.

A pair of LSU sprinters registered 2019 NCAA top-10 marks on day one of the New Mexico Collegiate Classic. Jaron Flournoy, who was making his season debut in the 200 meter dash, clocked a time of 20.63 to claim gold and the fifth-fastest time in the nation; his time technically translates to a 20.70 due to altitude. On the women’s side, Kortnei Johnson used a season best of 23.15 (converts to 23.22 for altitude purposes) to claim gold and register the seventh-fastest readout in America.

In addition to the event winners, Akanni Hislop took second on the men’s side with a personal best of 20.92. The women’s squad swept the top-four spots with Sha’Carri Richardson (23.53/PR) taking second, Rachel Misher (23.59) taking third, and Ariyonna Augustine (23.62/PR) placing fourth.

Day two of the New Mexico Collegiate Classic will take place on Saturday.