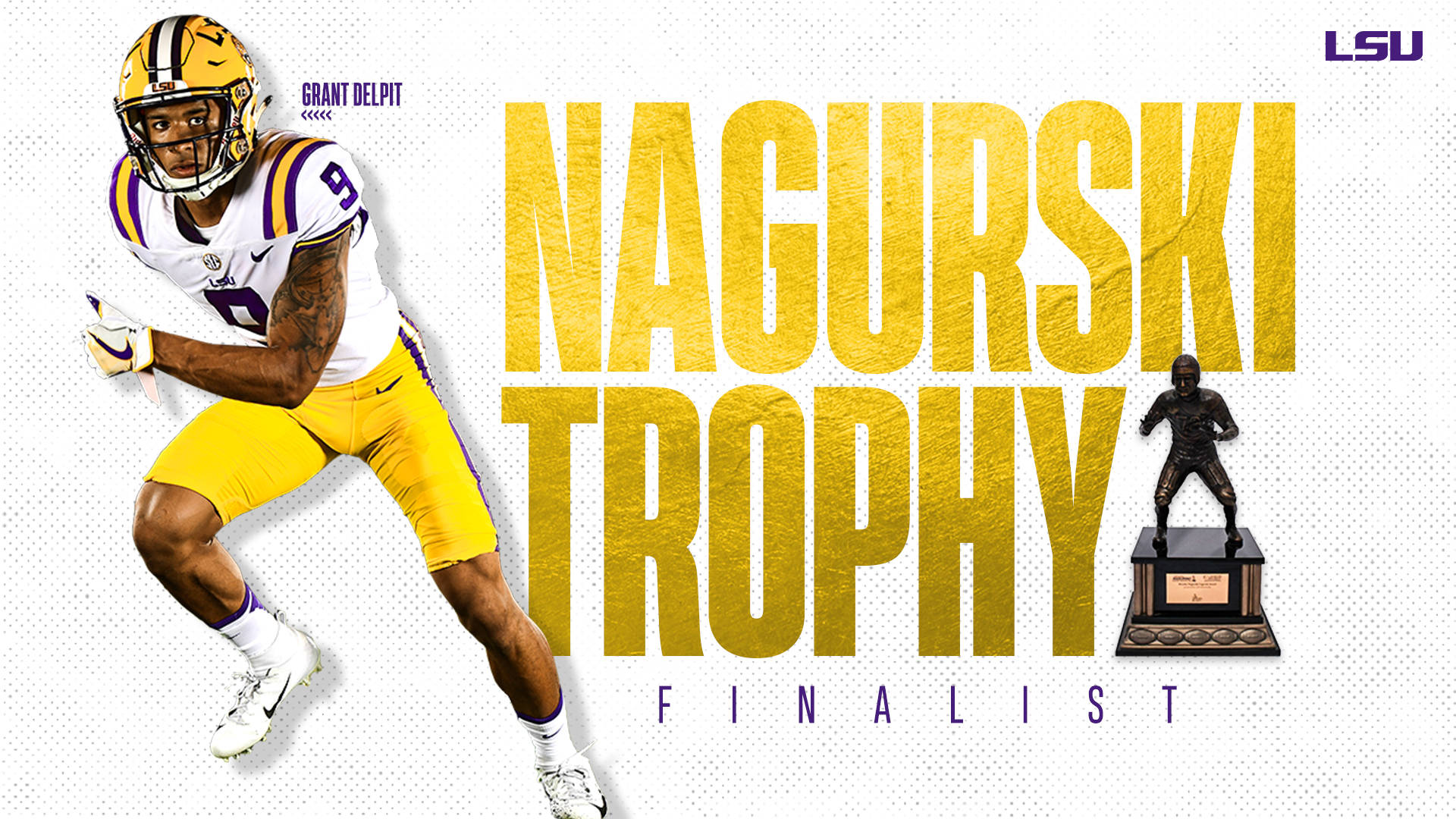 In a season full of highlights, there’s one Grant Delpit covets most of all.

Of course, there aren’t many more plays Delpit could make in 2018 that he hasn’t already. In 12 games, Delpit has 73 tackles, 9.5 for loss, 5 sacks, 5 interceptions, 9 passes defended, a forced fumble and a fumble recovery.

That sort of production is, quite literally, unprecedented. According to Sports Reference data, the list of players with 5 sacks, 5 interceptions, a forced fumble, and a fumble recovery since 2000 is quite short.

It’s Grant Delpit, and nobody else.

“He can rush, cover, play man-to-man,” says head coach Ed Orgeron. “It’s like having three players. That’s how much he means to our defense.”

There’s nothing Delpit can’t do – but there is one thing he’s yet to do in a game, and it eats at him. Drives him crazy. Makes him stay late after practice doing extra work with the jugs machine. Keeps him up at night watching YouTube videos.

Delpit’s toughness is unquestionable – he elected to play defense over offense at a young age, because, he says, “I’d rather hit than be hit.”

But there’s another side to Delpit, too, and it’s that aspect of his personality that has him hoping for that one, elusive highlight.

“I’m a finesse guy,” Delpit says. “I’ll come down and hit hard, too, but I like finesse plays. And I always wanted a clean, one-handed pick.”

The award for the top defensive player in the country. @showtime9_ is a finalist for the @NagurskiTrophy! pic.twitter.com/FccHFYXnox

It’s true – Delpit’s needed 10 hands for his five interceptions this season. But he’s got a thing for one-handed grabs. Maybe it’s generational, inspired by Odell Beckham Jr. Maybe it’s competitiveness, a final, unchecked box at the bottom of a long list of memorable moments.

Most likely, though, it’s his childhood love for another sport, where one-handed grabs are the norm.

He was a centerfielder, of course, roaming the outfield and chasing down fly balls like a safety tracking down ill-advised passes into a loaded secondary. He grew up a huge St. Louis Cardinals fan, mimicking Pujols’ batting stance while idolizing players like Andrew McCutchen, Curtis Granderson, and Jose Reyes.

He gave up the sport after his sophomore year of high school to focus on football, a wise but sometimes unpopular decision in his family.

“My mom loves baseball – still loves baseball,” he says. “She’s always talking to (LSU athletic trainer) Jack Marucci, trying to put in a word for me for (LSU Baseball) Coach Paul Mainieri. I may try to go out there, try out next year, get on the team. Maybe be a pinch runner.”

Delpit’s mother, at least, would like to get a photo of her son in a baseball uniform. She isn’t alone – there are plenty of SEC offensive coordinators who would love to see him in anything but a football jersey.

Don’t count on that anytime soon, though. Coach Mainieri will have to find another pinch runner elsewhere.

There’s another coach on campus with still yet more designs for Delpit on the gridiron.

DELPIT’S DESTINY WAS decided in Destin.

Well, maybe not Destin. Dave Aranda can’t remember exactly where the idea to utilize Delpit in a new role this season emerged.

He just remembers it was a beach – a beach his family quite enjoyed while LSU’s third-year defensive coordinator stayed inside, devising a scheme that would terrorize the Tigers’ opponents in the season to come and help establish Delpit as college football’s premier defensive back.

Aranda’s summer scheming came after a spring of searching for a pass rush. After LSU ranked third in the SEC and 14th nationally in sacks in 2017, Aranda faced the dilemma of replacing two-thirds of his sack production heading into 2018, as well as finding an heir to Donte Jackson at nickel.

When Aranda took his annual self-inventory and graded out LSU’s talent after spring practices, it became clear he needed “a true threat” on the edge. Not simply a good athlete who could win some matchups but not others. Someone who could rush, stop the run, cover, even drop into the middle of the field on motion to cover. Someone who could take on tackles, backs, tight ends, and receivers.

Someone who could do it all.

“You’re talking about a guy who’s basically playing outside linebacker, nickel, and safety in that one spot,” Aranda says. “That limited who those guys could be on our team.”

What Aranda needed was Troy Polamalu. So, he asked LSU’s video team to pull the future Hall-of-Famer’s last two years of Steelers film, and while his wife and kids frolicked in the sand, he buried his head in tape.

“I think we were somewhere like Destin,” Aranda says. “Not Destin, but something like that. And I’m just in the house they rented, breaking down Steelers film, seeing how they were bringing him off the edge. He was just causing so much disruption, just as a fourth rusher. It wasn’t even five guys. It was just him. It just made sense – that’s one of their best players, and they’re bringing him all the time.”

Eventually, Aranda stopped seeing Polamalu in the film, and started seeing Delpit, instead. So when he returned from vacation and actually saw Delpit in person at the start of fall camp, he pitched him the idea of a position change.

“The beginning of fall camp, he came up to me and said, ‘We have a position I might need you to play,’” Delpit says. “’It’s called quarter.’”

Quarter, as in, a bigger nickel – the fifth defensive back on the field for a defense. Facing modern spread offenses week in and week out, LSU’s base defense under Aranda in his first two seasons at LSU was essentially a nickel package. He used corners in that fifth spot because they were the best fit, but corners near the line come with consequences.

“The nickel, that position, when it was a corner, could help you when they were throwing it, but it was a detriment at times when they’re running it, because the body type wasn’t there,” Aranda says. “The quarter was just a bigger nickel. You wanted a safety in that spot. That was the reason for looking at the Steeler film, trying to find ways to take advantage of a bigger guy in there, the matchups that came with it.”

Two things happened, foreshadowing the season to come: either Delpit got favorable one on one matchups, or he drew the attention of the offense and opened up a lane for a free rusher elsewhere.

“He took to it right away,” Aranda says. “We were getting free runners, we were getting him winning on backs. He became a threat right off the bat.”

The success in scrimmages gave Delpit unprecedented confidence. He’d been very good as a freshman free safety playing center field in the middle of LSU’s secondary, but getting closer to the line of scrimmage allowed him to use all of his talents – the speed, the physicality, the coverage skills – in a new way. He hinted at that self-assurance when talking with reporters during an August media session.

“Year two,” Delpit said, “should be my breakout year.”

BOY, WAS DELPIT right about that.

There has been no defender in college football quite like him – not this year or any prior. By every statistical measure, his sophomore season has been – for lack of a better word – ridiculous.

Only two other players since 2000 even have, as Delpit does this year, five sacks and five interceptions. Neither forced and recovered a fumble, as Delpit has done this year.

Just as impressive as his production is his snap distribution: 49 snaps at edge rusher, 162 snaps in the box, 281 snaps in the slot, 358 snaps at free safety, 23 snaps in kick and punt return, 31 snaps in punt and kick coverage, and 29 snaps on field goal/extra point block. A total of 938 snaps – 150 more than any other finalist for the Bronco Nagurski Award – literally all over the field.

Even when he’s not the one actually making the play, Delpit making life easier on the rest of the LSU defense.

“The productions we get with Grant, people are ID’ing where he’s at, and it’s opening up stuff inside,” Aranda says. “Or we’re showing opposite and bringing Grant. He’s getting one on ones and beating them.

(PFF let me down on the sack numbers)https://t.co/pXsYB2xgEx

Delpit says the highlight he is asked about most is the fake field goal he snuffed out in the first quarter of LSU’s 36-16 win over No. 2 Georgia in October, but his favorite play was his first interception of the season against Auburn. On the second play of the game, he intercepted Jarrett Stidham to set up LSU’s first score, a vital touchdown in a 21-19 upset on the road.

“It was cool catching a pick in enemy territory, hearing that crowd,” he says. “They were No. 7 at the time. That was the third game of the season, my first pick of the year. I’ll never forget it.”

That Delpit caught the ball – and the four that have followed – was just one of the benefits of a new position coach. LSU brought in safeties coach Bill Busch during the offseason, which allowed defensive backs coach Corey Raymond to focus all of his attention on the Tigers’ corners. Busch’s focus became the safeties, nickels, and, yes, the quarter.

“I give a lot of credit to Bill,” Aranda says. “Bill’s a technician. He’s been able to really help with Grant’s understanding of the game. Grant’s got a good idea of what’s coming when we put a new defense in, we’re doing it because of this reason. This is what we’re trying to stop. This is the strength of it. Bill does a great job with that. The relationship between those two guys is very good. It bodes well for the future.”

Busch has also helped with Delpit’s hands. The first-year safeties spent much of the fall with brooms in the faces of his players, who dropped – he was happy to remind them, time and time again all fall – 22 interceptions in 2017. Delpit had a few of them, including one late in the first half against Syracuse that still occasionally keeps him up at night.

“It would’ve been clean,” he laughs. But the broom work, he says, has “definitely worked. Those drills banged in our mind, don’t drop picks.”

Delpit hasn’t caught every potential interception this season – he recalls one in the opener against Miami that he was happy the television broadcast decided not to replay.

It’s perhaps the lone and forgotten blemish on a remarkable season in which he’s made just about every type of play imaginable, a centerfielder turned utility player, a jack of all trades who’s mastered them, too, a quarterback-haunting quarter with a fully-loaded highlight feel featuring every possible play.

Except, of course, the elusive one-hander.

“It hasn’t come yet,” Delpit says, “but I really need that one-handed pick.”