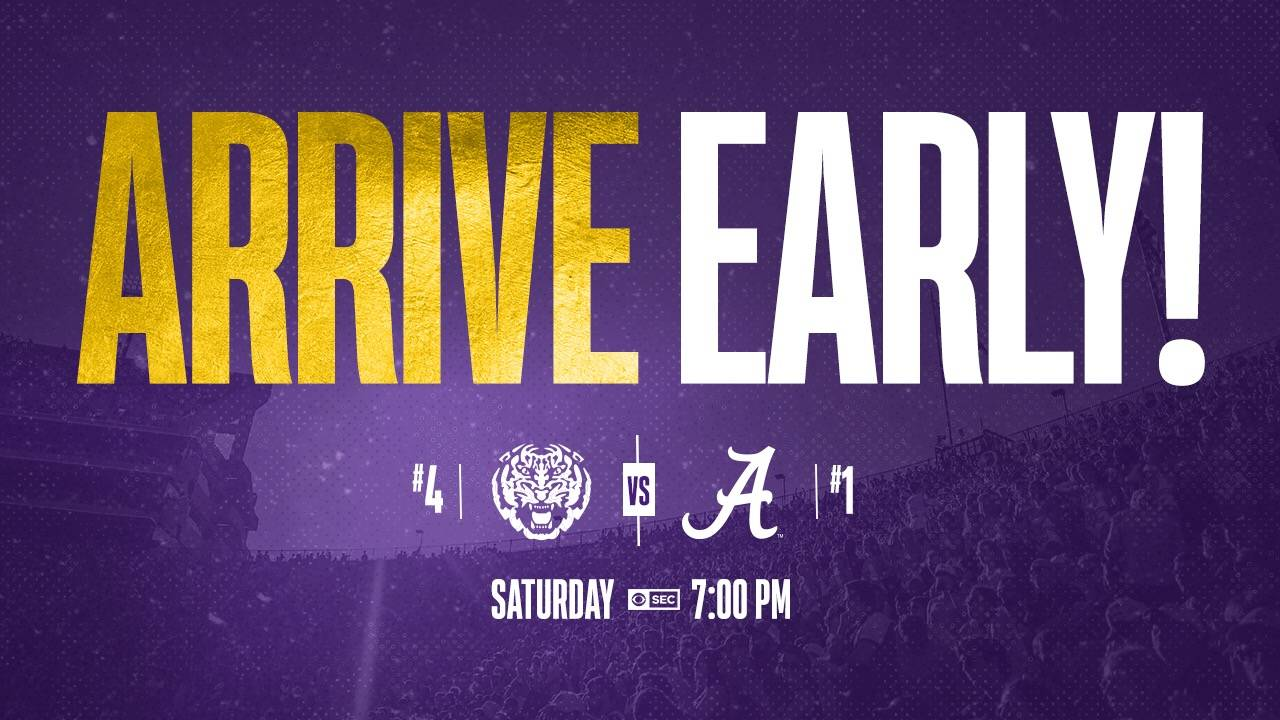 BATON ROUGE – LSU is advising fans to head to campus in the early afternoon and plan to enter Tiger Stadium at least an hour early for the matchup against No. 1 ranked Alabama as the school is expecting one of the largest crowds ever on campus.

Kickoff for the matchup of top-five teams is set for 7 p.m. on CBS. The game is completely sold out and the matchup is fifth featuring teams ranked in the top-5 in Tiger Stadium history.

There are many events going on around campus Saturday, including College GameDay, LSU Salutes, Nissan Heisman House and College GameDay Radio. Fans are asked to be patient in making their way on to campus and arrive in the early afternoon for ample time to prepare for the game. Gates to Tiger Stadium will open at 4:30 p.m. on Saturday.

Parking on Tower Drive will also be reserved for the ceremony. Gameday parking sales at the Dalrymple at Highland location on the north east side of campus will be offline until after the ceremony. Day of game parking at Highland and South Stadium will remain open during the ceremony. Click here for more information on LSU Salutes.

Arrive Early
Fans are encouraged to arrive early and to carpool when possible to reduce the number of vehicles on the LSU campus. Lyft is the Official Ride Share Partner of LSU Athletics, and fans can use RIDEBTR for $5 off rides on Saturday to the game. Heavy traffic is anticipated for the 7 p.m. kickoff so fans are encouraged to plan ahead by locating their parking area at LSUsports.net/gameday to determine the best route. The Waze app will provide real-time traffic updates and suggested routes to campus. Follow @LSUsports and @LSUgameops on Twitter for pregame and post-game traffic and parking alerts.

Parking lots open at 7 a.m. on Saturday. Day of game parking for purchase is available on a first-come, first-serve basis on the east side of campus. There are many free lots available on the south side of campus – Old Front Nine, Lot 413, Hayfield Lot, Golf Course, Gourrier South and Levee South.

Ticket Advisory
The LSU-Alabama game is officially sold out. Fans should beware of counterfeit tickets which are common for major sporting events such as Saturday’s game between the Tigers and Crimson Tide. Fans should only purchase tickets from family or close personal friends or through Stubhub, which is the official marketplace of LSU Athletics at LSUsports.net/marketplace. Tickets can also be authenticated by taking them to the LSU Ticket Office.

College GameDay Live From The Quad
ESPN’s College GameDay will be live from Baton Rouge and specifically The Quad on the LSU campus on Saturday. GameDay airs from 8 a.m. to 11 a.m. CT on ESPN, and the show is hosted by Rece Davis, who is joined by Lee Corso, Kirk Herbstreit, Desmond Howard, David Pollack and Maria Taylor. This is LSU’s 28th appearance on GameDay and the show’s 12th visit to the LSU campus. It’s the second time that College GameDay will be located in The Quad, which is considered “the most beloved LSU landmark”.