The Truth: Tigers Confident Preparation Will Pay Off 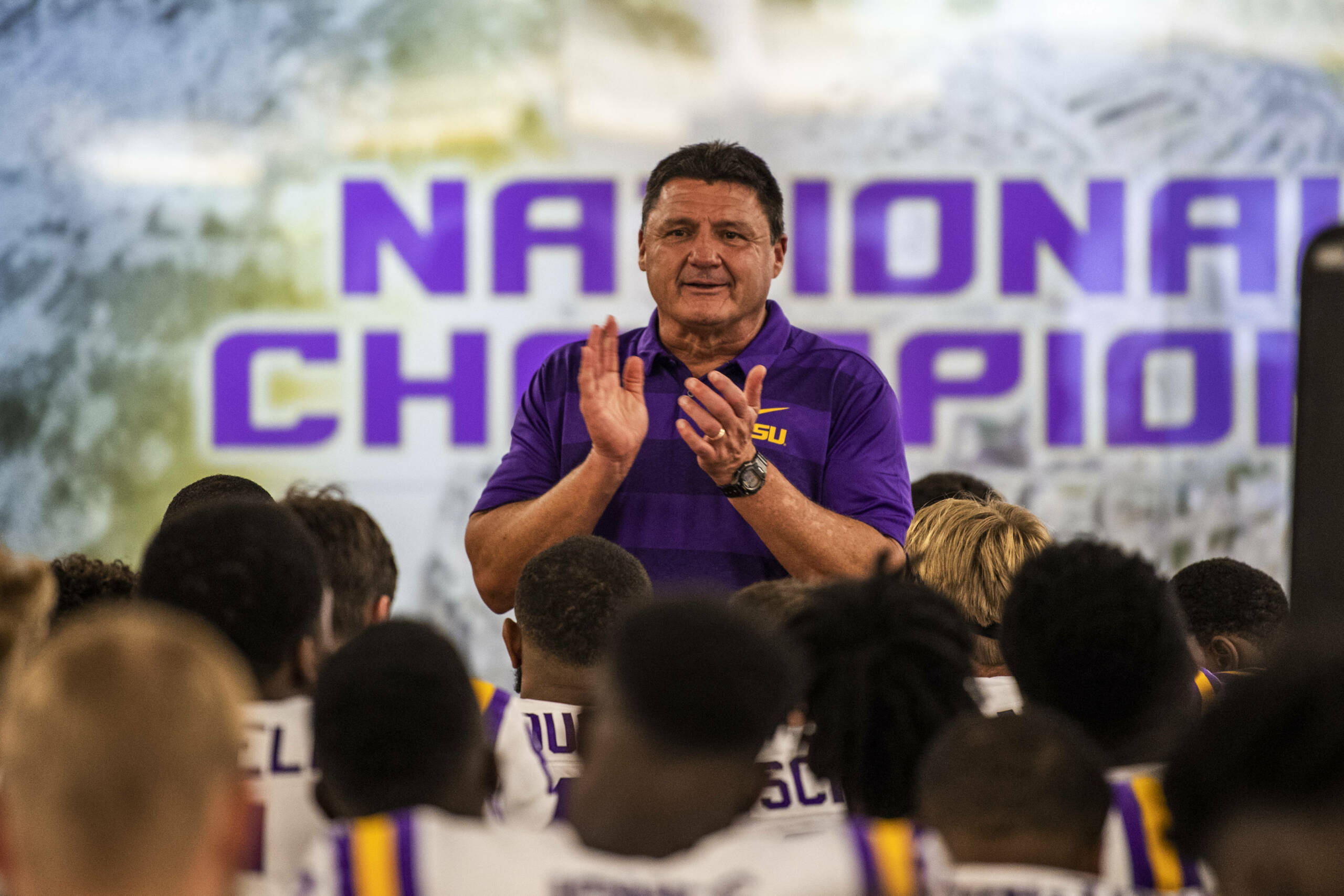 Ed Orgeron‘s reputation as a motivator is unparalleled in college football.

But as he prepares his fourth-ranked Tigers for a primetime CBS matchup with No. 1 Alabama, LSU’s head coach knows his team won’t need much help getting up for Saturday night.

“Now, when it comes down to game time, there’s going to be an excitement in the air that’s going to be different for this game. This just happens this way. That’s how it is, LSU versus Alabama. There’s nothing I need to say or do this week to get these guys fired up.”

Instead, this week’s focus is preparation, as No. 4 LSU (7-1, 3-1 SEC) enters its annual clash with the Tide as ready as they’ve been in any recent season, thanks to a number of factors.

First and foremost is the nation’s toughest schedule, which the Tigers have navigated far better than most on the outside expected. LSU is 4-1 against ranked foes this year, including a perfect 3-0 against top-10 opponents. Both win figures are the most in the country.

Preparing each week for the next challenge with virtually no breaks in between makes getting ready for Saturday’s matchup easier, the Tigers say.

“He’s just trying to keep that same mindset we had when we lost to Florida and we had No. 2 Georgia,” said edge rusher Michael Divinity, who is tied for the team lead with four sacks. “A lot of people were asking what we would do and how we would take this game. Then when we beat Georgia, we had Mississippi State, and everybody was like, ‘How are you going to transition from playing the No. 2 team to playing this team? Are y’all still going to be high, or play lower for this team?’

“We’re going to treat every team the same, no matter what. Alabama is No. 1, we’re No. 4. Numbers don’t matter when it’s Saturday and y’all are next to each other, one-on-one.”

“When the season started, a lot of people were like, ‘LSU has a really tough schedule,”’ added sophomore linebacker Jacob Phillips. “People were really down on that. But I think it’s actually prepared us really well. You get to come here and play big teams, the young guys come in and play big teams. Now, the moment’s not too big for anybody, because we’ve already done this. It’s just another game.”

LSU is also more equipped from a scouting perspective, thanks to an increased investment in off-field analysts. The Tigers have 10 analysts this year whose preparation for each game, including Saturday’s, dates back to the summer.

That’s been a huge boost to defensive coordinator Dave Aranda, as has the addition of safeties coach Bill Busch. The effect is that LSU’s scouting efforts are well ahead of where they were a year ago.

“Dave has appointed each analyst a different section for them to study,” he said. “Think about this: Kevin Coyle is studying something as an NFL coordinator would for 15 years, or defensive coordinator for 15 years. He brings a wealth of knowledge, especially in the back end. Him and Bill Busch have been an excellent addition to our team.”

The players have noticed the edge in the scouting reports, too.

“Pretty much now, there’s an analyst or two for every position,” said Fehoko. “While we’re in our meetings, they’re in their offices typing up scripts, game plans, everything. The next day in our meetings, we have all this information: these are the protections you’re going to get. These are the blocks you’re going to get. It’s broken down: first down versus this front. If we come out in 4-3, this is what they’re going to run on this down or distance.

“They’re basically giving us cheat sheets. You’re not going to go into any game dumbfounded. You know exactly what you’re going to get.”

Or, as senior running back Nick Brossette says, “They write up a book for you.”

The preparation extends to the individual level, too. Quarterback Joe Burrow is prepared to hit the deep ball, an area he’s felt he’s been inconsistent with this season and an area the Tigers failed to exploit against Alabama a year ago.

“It’s hard to win big games like this if you can’t make explosive plays,” Burrow said. “That’s going to be my focus this week of practice, continuing that connection.”

On 40 deep attempts this season, Burrow has been accurate on just 37.5, but he’s been good for a 95.9 NFL passer rating on such throws.

“We had a really good week of practice last week,” said Burrow. “On our down field passing, I think we were 10 for 10 on Wednesday. It was really good going into the weekend having that good practice on Wednesday.”

“Nervousness comes from lack of preparation,” he said. “I’m going to prepare hard this week like I always do, look at every situation, look at every coverage, and try to visualize what they’re going to try to do to us.”

The Tigers will also need to be prepared to play for a half without All-American linebacker Devin White, who is suspended for the first 30 minutes after being called for targeting in the second half of the win over Mississippi State two Saturdays ago.

“Everybody has got to pick it up, starting with me,” Orgeron said. “Everybody knows that. This team plays well when they are mad. I coach better when I’m mad. I like it. That’s good. We need to be that way.”

A large burden will also rest on Phillips’ shoulders. After playing just special teams in last year’s matchup with Alabama, he’s eager to feature in a far more significant role come Saturday. He’ll be responsible for getting the calls in on defense and getting the unit organized in White’s absence, and it’s a role he’s ready to tackle.

“When you’re playing special teams, you don’t have as much to focus on,” he said. “You get to take in the experience, see the crowd, watch the game, support your teammates. Now, I’m a vet. People are going to be depending on me to help us win the game. It’s definitely going to be a little different.