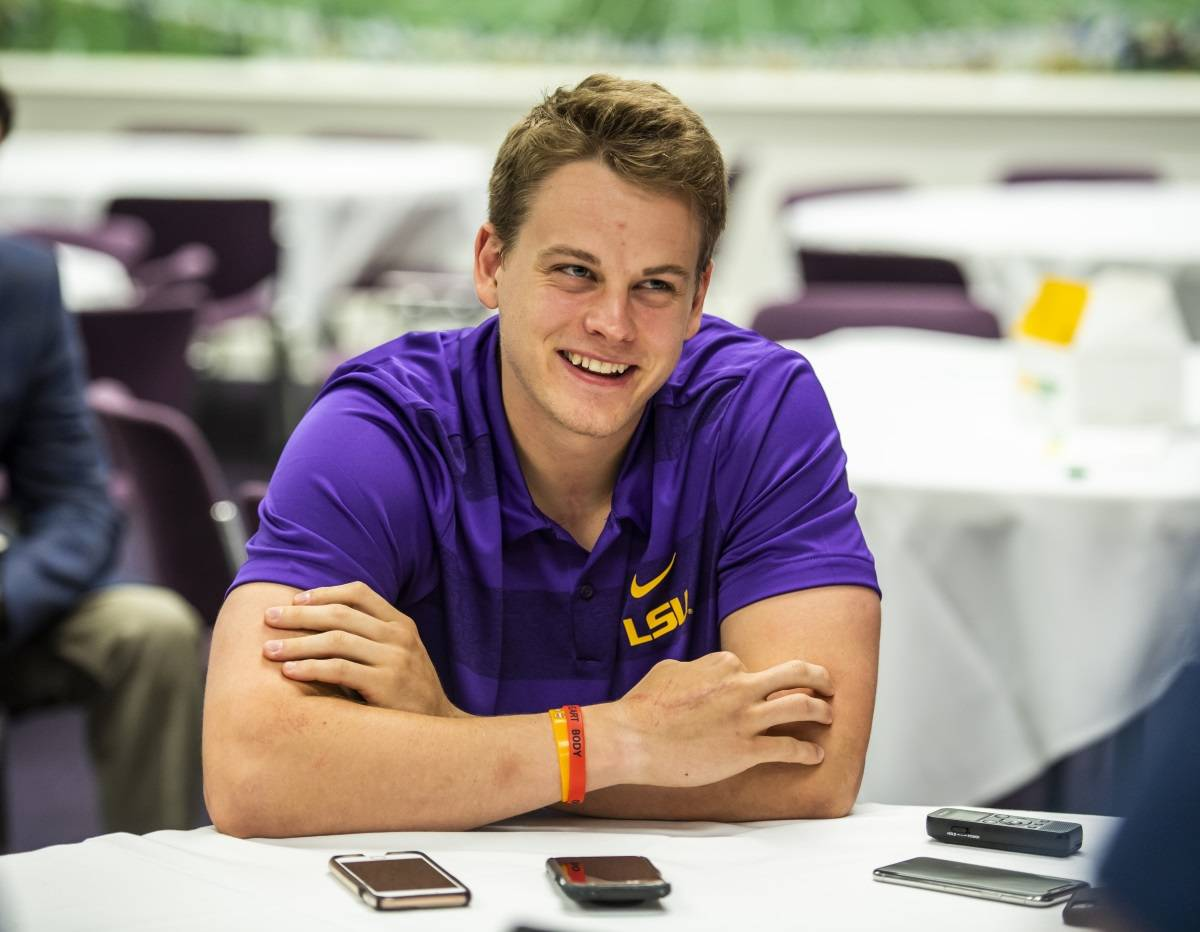 It’s the biggest game of the year, and it’s consuming Joe Burrow‘s thoughts.

A win means an almost certain playoff berth. A loss – well, he won’t even tolerate the thought of a loss.

Not to the Nelsonville-York Buckeyes.

Sure, Burrow has a big game of his own in 10 days, but after helping No. 4 LSU navigate the nation’s toughest schedule to a 7-1 start, Burrow, like his teammates, is enjoying a well-deserved bye week.

For the Athens, Ohio native, that means a weekend trip home to see his alma mater take on their biggest rival.

“If they win this one, they have a chance to make the playoffs for the first time since I’ve been there,” said Burrow.

He’s got a playoff-deciding game of his own coming up, too. Though he’s pumped for Friday night, Burrow’s primary focus is next Saturday’s clash with No. 1 Alabama in Baton Rouge. He’s already begun studying film of the No. 1 Tide, spending Monday watching their wins over Missouri and Tennessee.

But the majority of this week has been focused on LSU. Burrow said his calculation of the bye week’s work is “60 percent self-scout, 40 percent Alabama,” with an eye on finding not just what the Tide defense likes to do, but also on what the Tigers tend to do themselves.

“We have some tendencies we’re going to have to break,” Burrow said. “Alabama’s a really well coached team, so they’re going to know when we’re in certain formations, we’ve been doing this or that. We’re going to try to break those tendencies.”

One specific trend he’d like to help reverse in LSU’s red zone scoring. The good news is the Steve Ensminger‘s offense ranks third in the SEC in points per red zone trip (4.38), but Burrow knows the unit has left points on the table, scoring touchdowns on just nine of 24 drives inside the opposition 20 (13 others resulted in Cole Tracy field goals).

Perhaps the biggest boost of the bye week is the break from game preparation. Taking on top-25 team after top-25 team takes a toll, mentally and physically. LSU isn’t taking its foot off the gas, but the team is taking the chance to catch its breath before pushing on.

Nothing but respect for Joe Burrow and his fashion sense. pic.twitter.com/N129xW45gA

“The main thing is you get a chance to take a deep breath,” Burrow said. “You don’t play Florida, Georgia, Mississippi State back to back to back then have to play Alabama all in four weeks. You get a little break. That’s the biggest thing for us. My mind needs a break, my body needed a break, and it’s been great so far.”

Everything about Burrow’s approach – to the bye week, to the games that preceded it, and to the stretch of November games that follow – has been professionally tailored. After three years as a Big 10 backup, he’s approaching his time in Baton Rouge like it’s “his first job out of college.”

“That means you’ve got to be a pro,” he said. “No nonsense, no parties, nothing like a normal college guy. I’m looking at this like a professional job.”

He’ll go no better taste of pro football at this level than what’s on the menu next weekend. LSU’s annual matchup with Albama always features a score of future pros. He’s seen enough film of the Tide to know this year’s matchup will be no exception.”

Burrow likes big games. Just ask Nelsonville-York, who probably doesn’t relish the memory of Burrow quite the way Burrow relishes the memory of them.

Something to mull over, as Baton Rouge awaits its own big game.