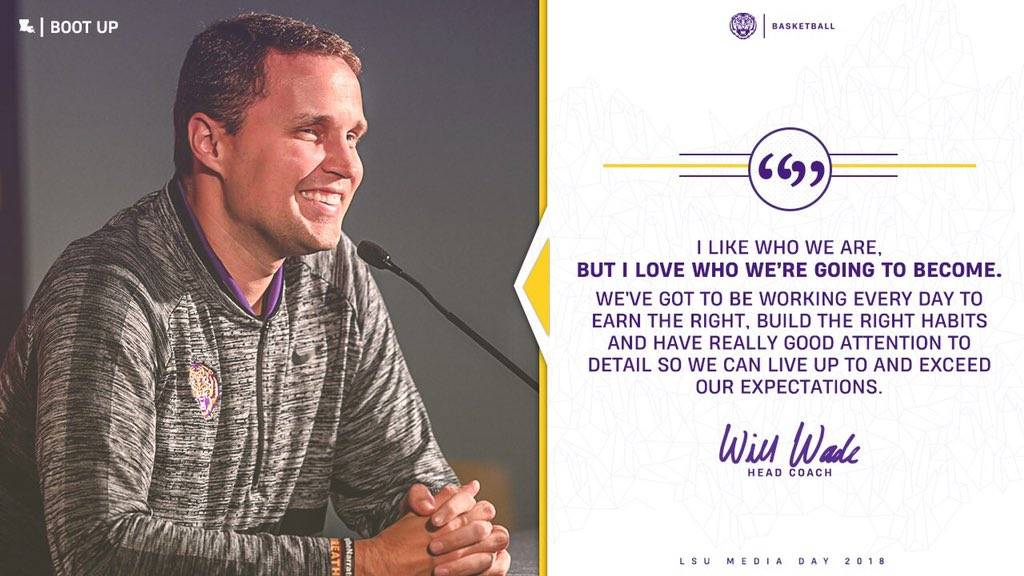 LSU’s senior center knows what postseason success looks like, having made the trip to Glendale, Arizona just 18 months ago with Oregon, for whom he was a reserve before transferring to Baton Rouge last summer.

So he knows what it takes to reach the pinnacle of college basketball – and what can keep a team from getting there.

“Consistency,” he said Monday at LSU Basketball Media Day, “and not getting bought into the hype. We have to prove it. On paper, we’re a top 25 team, but we have to prove it on the court. I feel like consistency and building good habits is what’s going to bring us to our goals.”

If there’s a theme to the Tigers two weeks out from the season opener, it’s about habits, not hype.

Sure, LSU debuted at No. 23 in the AP poll just hours before media day, and sure, the combination of a top-five recruiting class and a returning core of proven SEC veterans has the hype train rolling full steam ahead.

But the tracks stop outside of the LSU Basketball Practice Facility. Head coach Will Wade called the ranking “probably a bit generous.” It’s not that he doesn’t believe his team can justify that ranking.

It’s that, right now, the rankings aren’t worth much more than the paper they’re printed on, because votes don’t buy victories.

LSU doesn’t know where it’s going yet, but Wade knows what it will take to get there. A man of routine himself, Wade and his staff are working this preseason to develop good habits for his players.

“Our big emphasis here moving forward is we’ve just got to build better habits every day, and we’ve got to have a better attention to detail, something you guys have heard me talk about quite a bit,” he said. “I think that’s really important when you’re going to have a younger group and you’re going to be relying on some younger guys that your attention to detail is really good and that we build habits and earn the right to win.”

On the court, the focus of that habit development is on the defensive end. The Tigers ranked 11th in the SEC in defensive efficiency last season, 13th in defensive effective field goal percentage, and last in two-point field goal defense. The overhauled roster should help – as should the rim protection provided by the likes of Bigby-Williams and five-star freshmen Naz Reid and Emmitt Williams.

But talent only goes so far. Wade is looking for solidarity – five that defend as one.

“We’re not playing solitaire, so it’s a team — you’ve got to have team defensive concepts,” he said. “It’s not necessarily just one-on-one. The biggest thing we’ve got to focus on is our guys know their jobs, now we’ve got to get them to work as one and act as one and play as one defensively because every time that ball moves, every time that ball is dribbled, everybody has got a job to do, and everybody should be moving.”

That message is getting through. Wade’s efforts are key, but the defensive talk is also coming from the players, too.

“People tend to think basketball is all about offense, but you win on defense,” said senior Daryl Edwards. “It’s about getting them to understand every defensive possession is important.”

Those good habits are also manifesting themselves on an individual basis. Take sophomore point guard Tremont Waters, for example. A First Team Preseason All-SEC selection, Waters spent the offseason refining his eating and sleeping habits in an effort to take his game to the next level.

“This year he knows how he takes care of his body and how he eats and how he sleeps and how he recovers and the cold tubs, and all that stuff will have a direct correlation with how he plays,” Wade said. “He just has a more mature approach, which is what you’d expect from somebody who’s been here a year.”

The young players have picked up on that, too. Wade’s words and Waters’ example – as well as the leadership of the rest of the returning core, like junior Academic All-American Skylar Mays – have made an impression on a group of incomers willing to learn.

“I think the steps that we’ve taken and the progress we’ve made in such a short amount of time, especially with the freshmen, how well they listen and are able to apply,” Mays said. “It’s obviously a lot of attention to detail, but we’ve been able to go through practice efficiently and get a lot of work done.”

There’s plenty of work left to do, too. The Tigers may be ranked in the preseason polls, but they’re not where Wade wants them to be.

“I said this at the SEC media days, and I think this is true,” Wade said. “I like who we are but I love who we’re going to become. So we’ve got to be working every day to earn the right and build the right habits and have really good attention to detail so we can hopefully live up to that and be even better than that.”