Parker Leads LSU to Victory Over No. 8 South Carolina 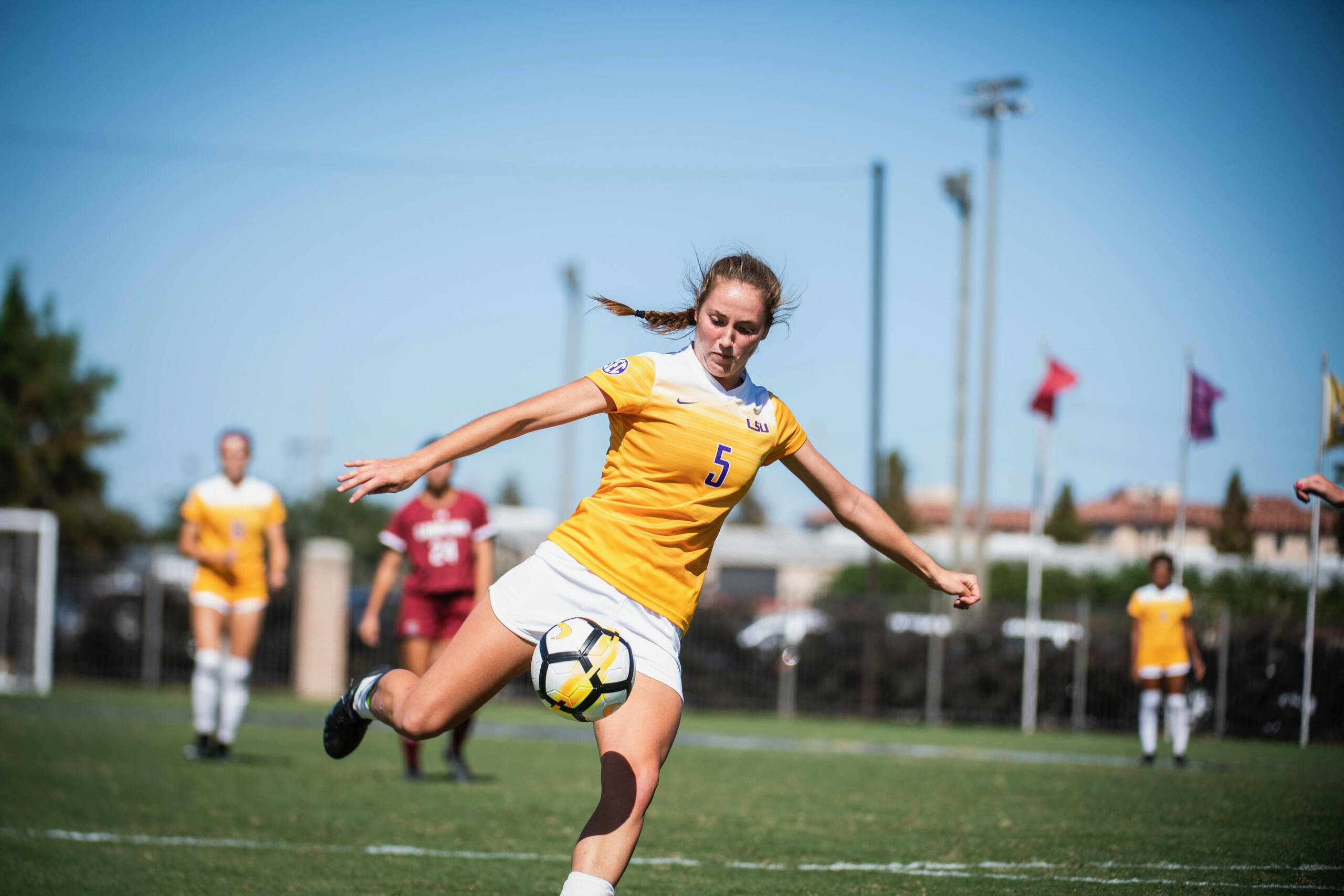 Baton Rouge, La. – Two goals from Lucy Parker, one in the 89th minute and another in the 106th minute of play, pushed the LSU soccer team to an epic 2-1 comeback victory over No. 8 South Carolina on Sunday at LSU Soccer Stadium.

The sequence all started with a goal kick from Caroline Brockmeier. Marlena Cutura positioned herself wonderfully under the kick and won the ball to the foot of Alex Thomas. Thomas dribbled a time or two before drawing a pair of South Carolina defenders to her. Sensing the pressure, Thomas found a trailing Parker in the middle of the pitch with a nice pass. Parker saw the pass and didn’t hesitate one bit ripping a shot from 30 yards out. Right off the foot the shot swung out to the right of a defender before curling hard to the far left post and it beat a diving Mika Krzeczowski in the 106th minute. It was Parker’s first multi-goal game as a member of LSU.

“After I hit it, I knew I had hit it well and I watched it hit the back of the net and it was just pure relief,” Parker said of the game winner. “I don’t think the game could of gone any better. We deserved to win that game. It had been coming. We have had our fair share of losses in overtime and this was our chance to get some revenge.”

With just over a minute left in regulation the English duo of Shannon Cooke and Lucy Parker teamed up to level the score. Cooke found herself on the left side of the pitch near midfield and she sent in a boomer of a ball in the right side of the box. After the ball ricocheted off a South Carolina defender, Parker chested the ball down and let it take one hop before she ripped a volley to the far left post for the equalizer in the 89th minute of play. The goal by Parker in regulation was the first goal that South Carolina had allowed in 629 minutes of play.

89′ | THE EQUALIZER! A deep ball in by @shann_cooke finds @Lucy_Parker98 and she finishes it off! We’re headed to overtime.

The Gamecocks got on the board first in the 66th minute with a penalty kick after LSU committed a foul in the box. Lauren Chang was the beneficiary of the penalty kick and she netted her sixth goal of the season.

Caroline Brockmeier came up big on Senior Day with four saves in the match. The most important one of the day came in the 44th minute of play just before half. South Carolina’s free kick from the right side of the pitch was sent in on the ground and a streaking Ryan Gareis got a left-footed shot off from just outside the six but Brockmeier cleaned it up without any trouble.

The Tigers will close out their regular season slate with a road trip to Starkville, Miss., on Thursday night. First kick against the Bulldogs is scheduled for 7 p.m. CT.