Speed Read: Defense Dominates, and Delpit Does It Again 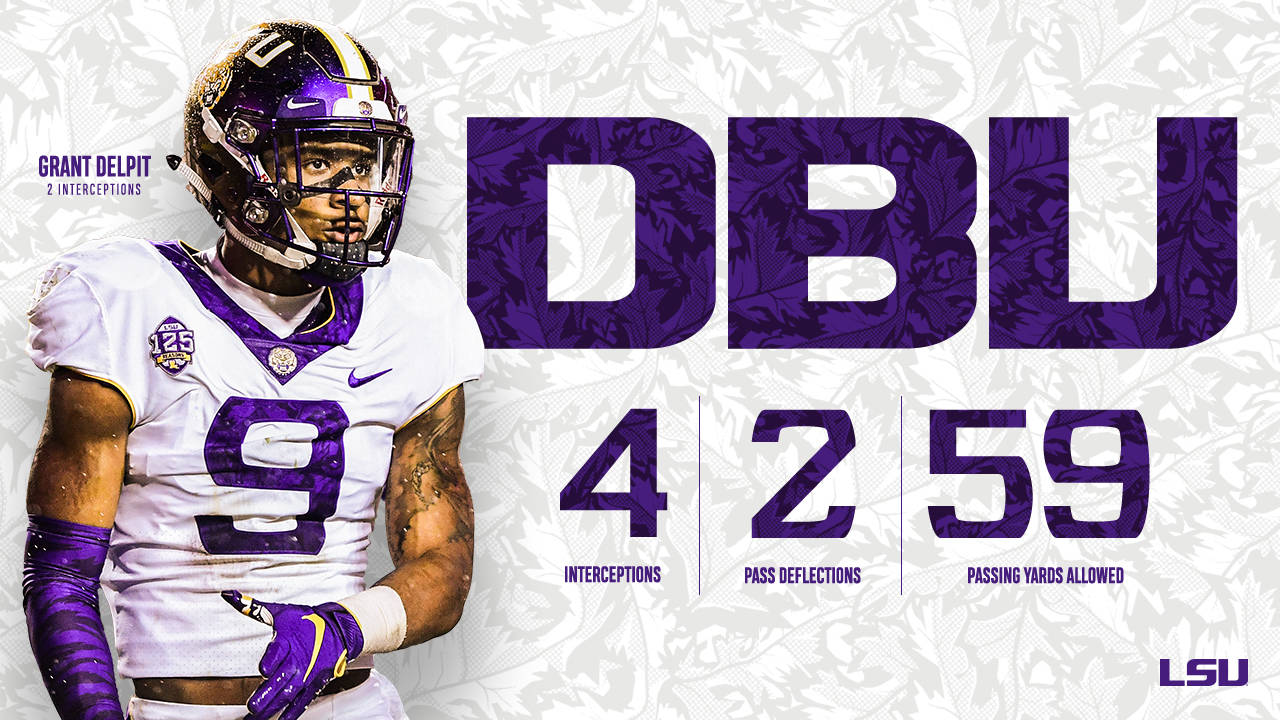 Joe Burrow has, admittedly, had better games in his football career.

The junior quarterback struggled early against Mississippi State and finished just 16-of-28 for 129 yards and an interception. He said he “threw the ball like a middle schooler” and shouldered the blame for the Tigers’ offensive struggles after gaining just 239 yards as a time.

Then, he thanked his defense – and was thankful he didn’t have to play against them.

“Our defense is incredible,” Burrow said, after watching Dave Aranda‘s unit hold Mississippi State to 260 yards while forcing four interception in LSU’s 19-3 win over the Bulldogs. “When you can have a game like we did on offense and still win by two touchdowns, it’s not like that at a lot of places. Coach Aranda does a great job. That defense is stout.”

On a wet, rainy night against a potent rushing attack spearheaded by a hard-running quarterback, the LSU defense turned in perhaps its best showing of the year.

The Tigers were dominant across the board defensively, but they did their best work on third downs and forcing turnovers. State converted just 2-of-14 third down attempts, including just 1-of-7 on third and short or goal.

The formula for success was boring but undeniable – sticking to Aranda’s game plan of strict gap discipline.

“It was staying disciplined, focus on our gap, control our gap,” said Michael Divinity, who finished with four tackles (one for loss) and an interception. “The runs they like to run, the QB sits and waits to see what gap he wants to hit. We just stayed focus on handling the business we had to handle.”

Divinity grabbed the first of four Tiger picks and the first of his career on State’s first drive, setting the tone for a night of defensive dominance. On 3rd and 10, Divinity feigned pressure of the edge before dropping into coverage and nearly housing the pick.

“I just got to my drop. I visioned the QB, and his eyes, he literally telegraphed where he was going to throw the ball,” Divinity said. “Once he threw it, I knew I picked it, and then I just tried to score.”

Michael Divinity said he simply read Nick Fitzgerald’s eyes on this pick. The ref nearly messed up the shot at his first carer pick. pic.twitter.com/76D7cSIZxf

The junior edge rusher has been more used to sacking quarterbacks than intercepting them this year, but getting that early turnover helped set the stage for a master showing from his defense.

“To get a turnover on defense on the first drive is a big thing, because we set the tone for the whole game,” Divinity said.

Delpit Does it Again

The sophomore safety has been sensational this season, and he continued his stellar play with perhaps the best game of his career against Mississippi State: 10 tackles, two interceptions, one sack, and one tackle for loss. To put it in perspective: Delpit caught more passes from State quarterback Nick Fitzgerald than any Bulldog wide receiver.

“Those plays that Grant Delpit made tonight were phenomenal,” said Orgeron. “What a phenomenal football player he is.”

Through eight games, he’s now the team leader in sacks (4.0), picks (5), and tackles for loss (8.5), showcasing to the nation his versatility and his claim as the best safety in the country.

“Surprised?” Delpit asked rhetorically in response to a question on if his success has surprised him this season. “Yeah. I go out every week trying to make plays. What comes with it comes with it. I don’t know if I’d say surprised. Just blessed to be in the position I’m in.”

That position, according to some former Tigers, is already as one of the best in program history. Take, for example, ex-Tiger and longtime NFL safety Ryan Clark, who declared on Twitter Delpit is “the best safety (the Tigers) have had this millennium.” Delpit likes the praise but isn’t sure if he agrees.

“That’s huge, knowing all the guys who have come through here,” he said. “Definitely a blessing man, to see guys like that talk about me. Pay respects to those guys, because I don’t think I’m doing that much to be compared to those guys. It just comes with it.”

Twice, Fitzgerald looked sure to score a touchdown on Mississippi State’s second drive of the game.

Twice, Delpit cut him down. It was staying disciplined, focus on our gap, control our gap. The runs they like to run, the QB sits and waits to see what gap he wants to hit. We just stayed focus on handling the business we had to handle.

The first came on the end of a 40-yard scamper by Fitzgerald, when Delpit dashed from behind to clean up a defensive breakdown after Fitzgerald burst into the open field.

The second stop came on third and goal, when Delpit dove instinctually in front of a pulling State lineman into Fitzgerald’s path, tripping him up just before he could attempt to burst toward the goalline.

Thought this was Grant Delpit’s best play of the game. He just jumps in front of the oncoming blocker into the space he knows Fitzgerald will run into and trips him up. Pause it at the moment Delpit leaves his feet. Incredible instincts. pic.twitter.com/KnZOEpA3Dk

“I was just blitzing off the edge and made the play,” said Delpit, who finished with 10 tackles. “They were running a lot of quarterback runs, so I knew he was going to keep the ball.”

Sandwiching those two tackles was a backfield stop sparked by Rashard Lawrence‘s burst off the snap. Lawrence set a career high with eight stops, and he and Delpit helped team up to keep the Bulldogs out of the end zone early.

“Not giving up a touchdown in the beginning of the game is huge,” Delpit said. “We held them to three points and didn’t give up any after that.”

With four more field goals, kicker Cole Tracy moved into a tie for third for field goals made in a season at LSU (21). Through eight games, the senior transfer is 21-for-23 on field goals, and he’s not missed a kick inside of 50 yards all year.

Such success would surely make for an increase in confidence, but Tracy said he’s approaching every kick the same as he has since he first started booting them through the uprights in Worcester, Mass.

“I think it’s the exact same I’ve had my entire career, even at Assumption,” he said. “I enjoy making field goals. I’ve had a lot of experience. That’s helped me in that type of situation.”

Wet nights can make for tricky kicking, but Tracy had no troubles on Saturday, splitting the uprights on all four attempts to continue his rise up the Tiger record books. He credited snapper Blake Ferguson and holder Josh Growden for their reliability in bad weather.

“Blake and Josh did a great job,” he said. “They work each and every day. We keep a log of how many balls they’ve snapped and held since the beginning of camp. I think it’s over 2,000. It’s just rhythmic for them.”

The other factor in his favor: he’s kicked in far worse than a south Louisiana rain storm.

“Kicking in New England for the last four years helps out with the conditions,” he said. “When I can trust (my holder and snapper) and trust my past experience, that helps a lot.”