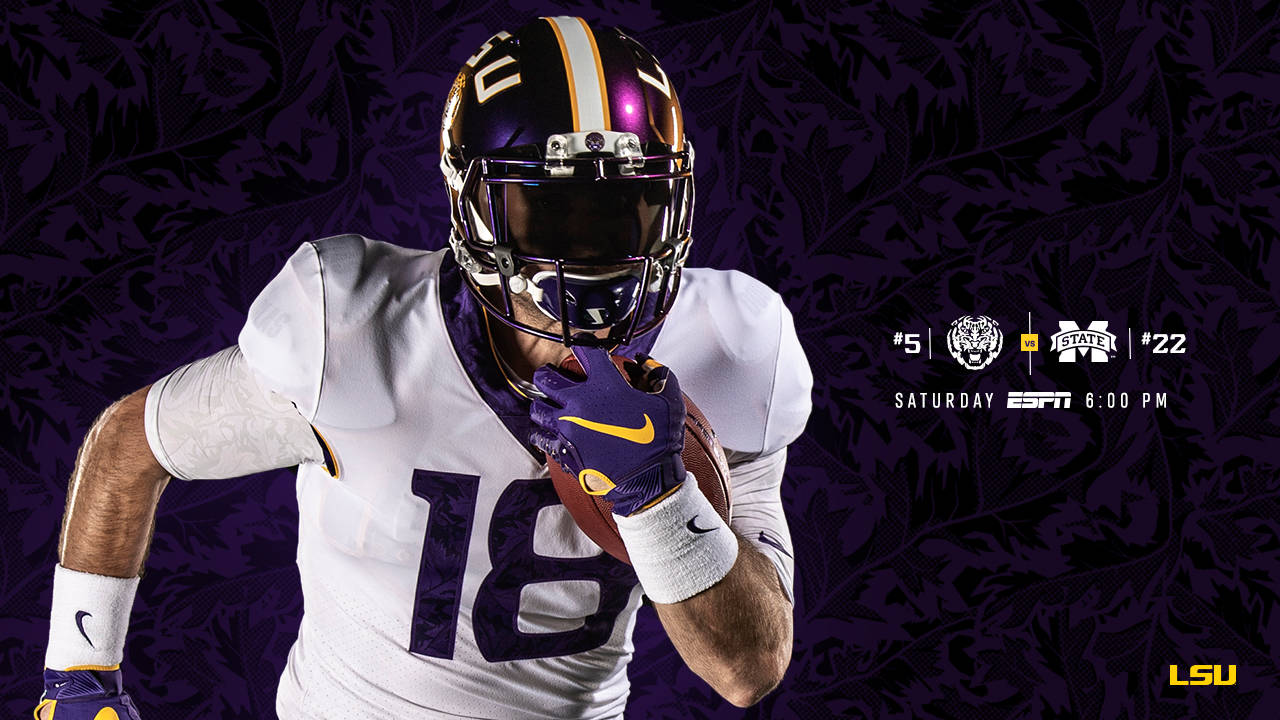 Back in the top five after a win over the No. 2 team in the country, No. 5 LSU returns home for a second-straight top-25 matchup against No. 22 Mississippi State.

The game, set for a 6 p.m. kickoff, will be televised on ESPN and available online at WatchESPN.com. Fans can also listen to the broadcast on the LSU Sports Radio Network or stream live at www.LSUsports.net/live.

It’s a homecoming contest for the Tigers (6-1, 3-1 SEC), who last week used a 36-16 win over Georgia to vault back into the top five and improve to 3-0 against top-10 team this season. No other team in the country has more than one top-10 win all year.

But LSU spent little time digesting the win, instead quickly turning the focus to a Bulldog (4-2, 1-2 SEC) team that knocked off the Tigers 37-7 a season ago.

“We have a tough Mississippi State team coming in,” said head coach Ed Orgeron. “Out-physical-ed us last year on both sides of the football. We still have that taste in our mouth. This is a very good football team led by Nick Fitzgerald, one of the best quarterbacks we’re going to see.”

Fitzgerald, who has thrown for 719 yards and rushed for another 509, will go up against a Tiger defense that ranks 17th in the country in scoring (16.9 points per game) and 14th in passing efficiency. Devin White, who ranks third in the SEC with 66 tackles, and Greedy Williams, who ranks second in the SEC in opponent passer rating, anchor that Tiger defense.

On offense, the story of the season has been balance: LSU has exactly 1,415 yards rushing and passing after seven games.

Nick Brossette (fifth in the SEC in rushing with 640 yards) and Clyde Edwards-Helaire (146 yards vs. Georgia) pace a Tiger rushing attack that averages 202.4 yards per game.

“We have certain plays that they run very well, and we let them run those plays,” Orgeron said of his rushing attack. “Obviously Clyde is a good zone runner. Nick is more inside. That doesn’t mean Clyde can’t run inside. If I say that, he’s going to get mad at me, because he can run inside. They do different things. We have different packages for each of them. I would see them as equal now.”

Quarterback Joe Burrow, who set the school record for most consecutive passes without an interception earlier this season and is one of just two Tiger quarterbacks with three top-10 wins in the same season, also averages 202.4 yards passing per game. His top receiver, Justin Jefferson, is coming off his first career 100-yard receiving game against Georgia.

The Tigers have been effective in the red zone all year, ranking second in the SEC with 4.6 points per red zone trip. Critical to that has been field goal kicker Cole Tracy, who is 17-of-19 on kicks this year and perfect inside of 50 yards, has the Tigers in the top-15 nationally in red zone scoring (31-of-33).

“It gives us a lot of confidence,” Orgeron said. “When you don’t have a field goal kicker, you change your whole game plan when you get inside the 50. That’s not so. I’ll just keep on telling him, Get it to the 33, just get it to the 33, we’re going to kick it.”

In addition to homecoming, LSU will also mark the game with a new alternate uniform inspired by the 1918 “Silent Season,” the only year without football in program history, a result of America’s entry into World War I.

Despite the high emotions of the events and another night game in Death Valley, Orgeron says the Tigers remain solely focused on winning the game in front of them.

“This is a big game for us,” he said. “It’s going to be a physical game against a very talented football team. We have to get ready to go again.”